"I find this situation intolerable and the longer it continues, the more intolerable I'm going to find it." 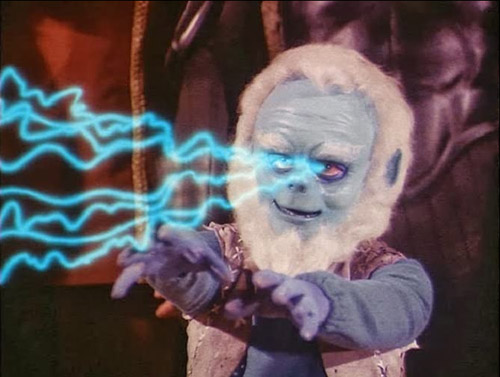 WHAT'S UP, BUCK?: Buck escorts an ambassador who once had a relationship with Wilma.

REVIEW: Making up for lost time, Season 2 offers a SECOND TV-movie sized episode in a row (and 3 in a row if you include the Season 1 finale). And sure, why not? Episode 1 introduced the new characters, maybe we need another double-sized shot to really get into the Searcher's mission and clarify the new premise. Well, we don't get that. Instead, Buck and friends have to escort an alien ambassador to a peace conference, surely a chore that sidetracks this exploration vessel's actual mission, and after roping Hawk into it with a big speech in the previous story, it really stings to have him pleasantly agree to babysit the bumbling Dr. Goodfellow in this one. Hawk feels completely neutered, in fact, and it bodes ill for the rest of the season. The extra time is thus spent on developing Admiral Asimov, but it's scarcely worth the effort. He's easily manipulated, he's a foil for comedy robots, and he waxes nostalgic a lot for when he was a young, fierce officer. With the rest of the cast down on a planet, he's given an adjutant, Lt. Devlin, who sort of steals Wilma's role. I know he stays with the show, and I'm afraid he'll have the Admiral's ear when a COLONEL really should. We'll see.

While the two Admirals (Asimov and the Zykarian Zite) at loggerheads, neither wanting to provoke a war, is written well enough if a little slow, I can't say the same of the A-story. Ambassador Duvoe (Mark Lenard) is set up as an old flame's of Wilma's, creating a romantic complication for Buck even though the show never allows them to have even the semblance of a relationship (so low stakes then). They met 7 years ago when she was a young officer and he was... well still pretty old actually. It's more than the age difference (26 years going by the actors), it's what Lenard projects. He's a kindly father figure, not some would-be lover who almost threw his career away for a woman he calls "a child". So after the shuttle to the conference crashes, we get a lot of walking hand in hand talking about what might have been (Duvoe has more in common with Asimov than Wilma), and piques of jealous competition between him and Buck, and I'm not sure we care (or how his attitude fits the profile of a legendary diplomat). They also give the Ambassador a secret to complicate things further and explain why he could never be with Wilma, and it's extremely STUPID. The Zykarians look human, but believe themselves repellent to humans because, get this, they can detach their heads. Mark Lenard telling his body to hurry up and stick him back on after a lame lichen-squid attack to his neck is quite something. It's used at the end to scare away the head-worshiping mutant natives of the wasteland, shocking Wilma, but she's open-minded enough not to reject him for it. Like, I get the message, but couldn't they have found something that wasn't biologically (and visually) ludicrous? Like that they were all wearing human masks or something.

But that's not the worst part, not by a long chalk. The party crashes in the desert and must walk to Oasis, fine. (Check out Erin Gray's tan from this adventure, in the scene BEFORE she goes on it.) But the journey is played as pointless cod-fantasy. Mutated natives? Fine, Buck's been there before, many times. But the obnoxious gnome Odee-x, with his fixed, hardly-moving blue mask, magical powers and propensity for giggling and guiding the heroes with riddles? What's happening here? Who set up these traps, like the Cave of Winds' invisible walls, or the villainous Ezarhaaden who must be defeated in a sword fight? (And did Buck really need to solve a riddle to figure out that "going for the heart" would work?) Why is this the only way to Oasis? Can't we just go around the cave? There's no mountain in the way! A piss-poor Sinbad-like picaresque with various fantasy challenges to pad things out, and nothing more. I don't dislike the bit where Wilma lets herself be hypnotized to walk through the wall, but it's magic, not SF. Also, is this the first time Wilma screams like a B-horror star? Dr. Goodfellow spends all his time trying to stay behind so he can study this and that and no one lets him. Quite tedious. And how does the crash landing even connect to the seeming plot to prevent Duvoe from reaching the conference. It seems the Zykarian leadership has sabotaged the mission so they can start a war, claiming the human escort actually kidnapped or killed the ambassador (secret orders were at the ready to Zite's dismay), but no mention is made of this once Duvoe reaches the conference safely.

And the effects are actually worse than usual this time around. The Zytarian warships look awful. The alien masks are stiff. The lichen-squids are so limp it's ridiculous that Wilma can throw off their tentacles by herself. The sped up sword fight. The obvious switch from Vasquez Rocks locations and fake-rock sound stage. And I've been wanting to address some issues that I thought were aberrations in the previous episode, but seem here to stay: How awful the shuttlecraft cockpit looks with its one lever and cut-away controls; it just doesn't look workable. And what's with Dr. Goodfellow's sensible 20th-Century sweater and slacks? Why doesn't he have to dress up in the futuristic clothes when even Buck Rogers is forced to?

SPACE DISCO: "I will wear the cape."

STAR GAZING: Mark Lenard (Ambassador Duvoe) is a Star Trek icon, having played not only the first Romulan, but also Spock's father Sarek. Paul Carr (Lt. Devlin) also has some Trek credit, having played Lt. Kelso on the re-pilot of the series, "Where No Man Has Gone Before". Odee-x is played by Felix Silla (Twiki), presumably with his own voice.

ALL THIS HAS HAPPENED BEFORE: Admiral Zite wears a BSG Colonial Warrior insignia on his collar. The Zykarian ship is the same as Zarina's in Flight of the War Witch. The shadowy villain at the end of the story (Ezarhaaden) uses a lightsaber. Mark Lenard's first appearance as Ambassador Sarek was in an episode of Star Trek titled "Journey to Babel", so they're really pushing it.

VERSIONS: When split in two for syndication, Part 1 ends with Buck finding Duvoe wih his head off.

REWATCHABILITY: Low - Not only is it a tedious and stupid piece of SF-fantasy, but on episode 2, we've already betrayed the reason for all those questionable changes they made this season.
Buck Rogers

Anonymous said…
Yeah, this one's not exactly a classic. As you said, the tension among the crash survivors (and between Wilma and Buck) seems manufactured and Goodfellow is even more annoying than Crichton in this one. And if there's a point to the episode, I can't figure out what the hell it is.