"Pride is one of the seven deadly sins." 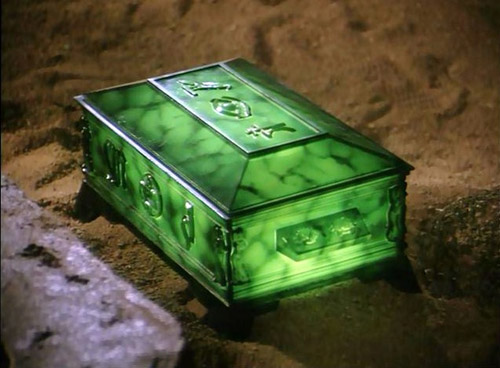 WHAT'S UP, BUCK?: Buck has to bring Pandora's Box to its new custodian.

REVIEW: Several genres are fighting for dominance in the opening moments of The Guardians. I LOOKS like a western, but then the open grave and sudden winds evoke the director's work in 1950s horror films. Ultimately, it's a cross between (another) fantasy quest - Buck is charged with bringing what is essentially Pandora's Box to the other end of the universe - and a Star Trek bottle episode where, through various visions and transformations, we get to know the crew a bit better. This is the SECOND time Buck has been "the Chosen One", which is irritating, and there's an awful lot of mumbo-jumbo about semi-immortal "Guardians" and elements of the Key to Time--or whatever they want to call it (sorry for the Doctor Who flashback). It's magic in a sci-fi setting, and altogether too Earth-centric when the ends of the universe feature humans and sculptures from Antiquity, and Pandora's Box (which has existed for eons - EONS!) has Greek and Egyptian symbols carved on it. This is the "mythology" the new producer wants inserted into the show, and it annoys me. There's a suggestion that the old Guardian really died 500 years ago and that Buck is late and normally would have undertaken this trip with his shuttle, and that's what caused the holocaust on Earth. Better not think about it too much.

That original trip does feature because the Box warps time around itself, usually as visions, and Buck is thrown back to before his mission. He has a nice chat with his mom (but no word of Jennifer), another woman to whom he promises to come back. The sequence retcons events to make it Buck's fault if he got lost in time, his hubris and impatience making him spark engines without the necessary pre-checks. Marcellus Wallace was right: Pride DOES f*** with you. And sending every cast member back in time like this, to a crucial moment or "sin" might have been the better way to go, but the Box works differently on different people. Asimov sees everyone starving, which is not a prophecy, but a manifestation of his later fears (he's a very foolish man, trying to open the Box in the cafeteria). Hawk is reunited with the soul of Koori and is really at his best when he's an intense, tragic figure (and nice to see BarBara Luna again). Wilma sees herself as a blind woman and later the Box blinds her (temporarily - a lot of commentary out there thinks it's silly that she's acting like she can see, but the dialog suggests she's only light-sensitive and will EVENTUALLY develop cataracts). For most of the episode, she's a desk jockey though. Lt. Devlin is about to get married, so he's shown his bride's death, just not as a vision, just as a result of time dilation. Poor Dennis Haysbert only see the controls go crazy (not much insight), and Dr. Goodfellow is as immune as the robots are. There are some good bits in there, but the Box's powers aren't consistent, which is another reason it's hard to take this as proper science-fiction.

In the end, Buck's self-sacrificing nature is required to try and save a shepherd boy (it's getting Biblical) from a crack in the ground created by an earthquake. The boy lets himself drop rather than see Buck risk his life and that wins him the role of 10th Guardian, taking the dead old man's place. I feel like we're watching some kind of allegory, but it's myth treated as technobabble

SPACE DISCO: Buck promises to dance at Devlin's wedding, but it's left up to our imagination.

STAR GAZING: Director Jack Arnold's first of two episodes, he gave us Creature from the Black Lagoon, It Came from Outer Space and other Atomic Age B-movies before working steadily in television from the '60s on.

ALL THIS HAS HAPPENED BEFORE: As in Battlestar Galactica, there are angelic guardians keeping the universe in balance in some way.

REWATCHABILITY: Medium - I'm not happy the show took a fantasy turn, but given that's what it is, this one's okay.
Buck Rogers

Charles Izemie said…
I remember when I watched Buck Rogers that I wasn't too bothered about Season 2 being essentially a different show – it still remained enjoyable enough popcorn watching if you remembered to check your brain in before turning on the TV set.

What was strange, though, was Lieutenant Devlin. This must be the only time I've ever seen Paul Carr playing an unambiguously sympathetic character – as a young man he used to be typecast as a nervous wreck or a neurotic villain, and when middle age beckoned, well, a villainous villain. I kept on thinking that Devlin must sell out at some point, but no. Did he just disappear from the show all of a sudden? Wouldn't surprise me, the role's essentially pointless.
November 17, 2021 at 7:29 AM

Mike W. said…
Yeah, this one seemed very Star Trek to me with the ship getting shanghaied to the edge of the galaxy (or universe, as they said); that happened in more than one TOS episode, plus the fifth movie (and some of the novels, like Wounded Sky). I'm not sure about Wilma's blindness either ... she slid behind the bridge console without any trouble and was reading stuff off the screens.

You're right about the new mythology for the show; it almost has a quasi-religious feel to it, like something Robert Silverberg might write.
November 17, 2021 at 2:13 PM