Buck Rogers #25: Mark of the Saurian

"I only use the term Man in the abstract sense." 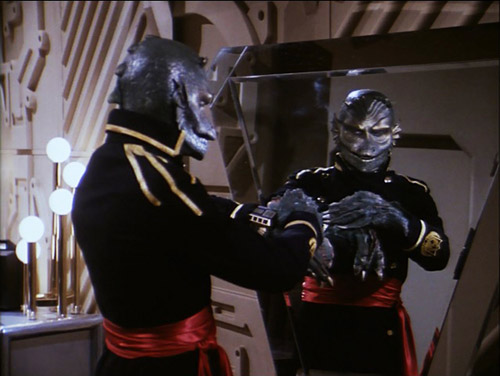 REVIEW: It's really annoying that they keep referring to the Searcher as an exploration vessel, when the plots keep hinging on ferrying diplomats around KNOWN parts of space, though at least we're here dealing with the consequences of an exploratory mission. It's surprising it's never happened before, really, but Buck has gotten sick from a future virus he has no antibodies for. 25th-Centurians are immune to Cygnus fever, but it still reads as quite wrong when Wilma strokes his face with hers as he sweats bullets in sickbay. His outdated biochemistry will allow him to see the outline (and sometimes the faces) of Saurians who have replaced the diplomatic team sent to broken a peace with them because their cloaks work on "blood frequencies", which is where the story really starts to break down. When you could have just said fever and pain focused the mind so it could see through a perception filter. How this works through monitors or just what the robots or non-human Hawk see are just a small part of the confusion surrounding this plot point.

Buck seeing monsters and running around the ship delirious is an engaging enough plot, and he eventually defeats the Saurians by turning down the heat (newly lobotomized Wilma has to be told reptiles are cold-blooded), but it's very thin. Buck sees something, no one believes him, then it happens again and again, and even though the ship's been sabotaged by persons unknown, they still don't believe him. Throw in a human base that shoots down even friendly ships unless they have the proper code for extra danger and confusion. Because here's the thing. This super well-armed space station already has a Saurian on it, in a position to let the Searcher pass and allow the Saurian party aboard to join him. How did he get there if there's no getting there? And if there is, why are these ones required to hijack the Searcher and put it on a destruction course to the station where a general has to sign off on the exception to the rule? Well, the Saurian on the station allows Buck to figure out what's going on (it didn't adjust its "frequencies"), it's just that it then puts the lie to the rest of the plot. Oops!

I'll forgive the very stiff Saurian masks because we don't see a lot of them, though I'd be less kind to Buck's reaction to them (and I don't mean that he thinks they're green when they're blue-black). Violently trying to choke a Saurian is a far cry from the more family-friendly Buck Fu. The enemy is ugly and it must be destroyed, says the show, entirely devoid of nuance. But while there's some entertainment to be gotten from a paranoid Buck, the comedy scenes with the robots are truly terrible. They've kept Twiki pretty much in the background to date - there's even an episode where he doesn't get any lines - but he gets extended moments that seem to say this isn't the same ambuquad we got to know in Season 1. It's not just the voice. He's getting 20th-Century idioms from the language archives instead of already being quite conversant with them from Buck, no Bitty Bitty Bitties, just a total personality transplant. His scenes are dull and he and Crichton together tedious children's television. Wilfrid Hyde-White seems even more improvisational than usual in this one, which I think I like, but is jarring when everyone else is reading from the script.

SPACE DISCO: Next to Buck's bed is the Simon rip-off, Computer Perfection. A '70s Commodore Pet computer also makes it into shot a couple times.

ALL THIS HAS HAPPENED BEFORE: The whole Saurian thing is like V meets They Live!, both only later in the '80s.

REWATCHABILITY: Medium-Low - The premise has value, but the execution is botched and padded with garbage moments.
Buck Rogers

Anonymous said…
Yeah, this one's ... not good. I can see why the show was cancelled halfway through the season. You'd think a routine scan would be done on everyone who boards the ship. And I thought it was hilarious when the Admiral was cheerfully demonstrating all the weapons and navigation secrets on the ship; you wouldn't share that info with your closest allies, let alone relative strangers, no matter whose side they're supposed to be on.

By the way, the new website look is cool, kinda streamlined, but it's gonna take me a while to get used to it.

Siskoid said…
Thanks, it's not exactly to my liking, but I just couldn't bear the thumbnail problems caused by Blogger's new image protocol. After almost 2 months waiting for a fix - and a lot of tries at other templates, very frustrating - I've decided on this compromise.

Charles Izemie said…
I agree that there's something very disarming about Goodfellow. Perhaps Wilfrid Hyde-White has glanced at the script, decided it was not particularly good (to put it politely) and gone for the seasoned thespian's trick of creating his own particular little universe which keeps him occupied and engaging.

Since you've read the book, could you perhaps shed some light some light on his casting? I can only imagine something on the lines of: "Oh, science fiction? Never understood a word of it, dear boy, but you see, apparently those breakfasts with Pérignon, lunches with Château Lafite and suppers with Krug have made me bankrupt, and I wouldn't say no to a steady job. Aren't those science fiction fans keen to have you around for lunches and drinks as well? However, I am an old man, you know, and all those uniforms are dashed uncomfortable. Could I wear my own clothes instead? And could I have some leeway with the scripts? They're a load of old cobblers, anyway, and I can't possibly remember them word for word. And I wouldn't mind if there's a job for my son – frightfully talented and handsome, you see, but experience wouldn't hurt."
November 25, 2021 at 4:15 AM