Category: Reaganocomics
Last article published: 4 July 2019
This is the 9th post under this label

A long time ago, I proposed Brother Power the Geek #2 as Ronald Reagan's first comic book appearance, or at least, FICTIONAL appearance, since he gets a three-page profile in 1950's Miss Beverly Hills of Hollywood #8 (as an actor, of course). But what is his earliest appearance within his own timeline? That would be Young All-Stars #4, which was published in 1987, but occurs in 1942. 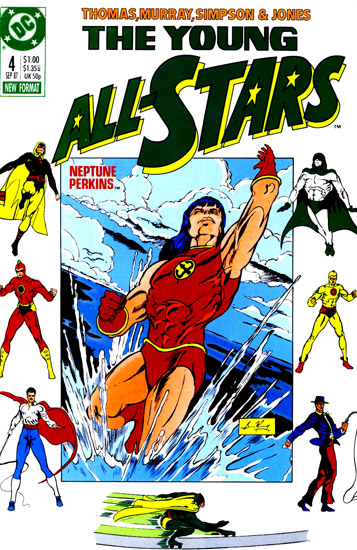 Meet Second Lt. Ronald Reagan of the Army Reserves, presumably just after he was ordered to active duty for the first time since enlisting (limited duty at home because of poor eyesight). History buff Roy Thomas makes him the opening act for the All-Star Squadron at a War Bond rally (the kind of thing he actually did during the war, minus the superheroes). 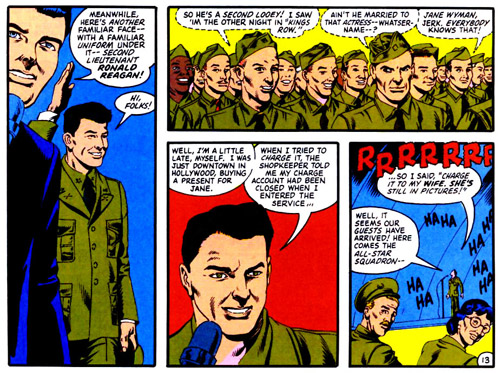 In the future of the DCU, his path would cross that of many more superheroes, as the American Commander-in-Chief who would preside over Legends' anti-hero hysteria, an Invasion by several alien species, and the creation of Task Force X, AKA the Suicide Squad. In a way, that's HIS All-Star Squadron, though unlike FDR, he was drafting mostly villains into his government-sponsored team.

Matthew E said…
Just a second, though; Reagan would also have appeared in the All-Star Squadron Annual where Ian Karkull was the villain.That’s got to be before this.
November 15, 2021 at 8:22 AM

Siskoid said…
He appears in flashback only, with his face obscured, so... not a full appearance or very interesting. But technically yes.
November 15, 2021 at 9:23 AM