RPG Advice: I Heard It on the Radio

Category: Radio
Last article published: 3 October 2015
This is the 17th post under this label 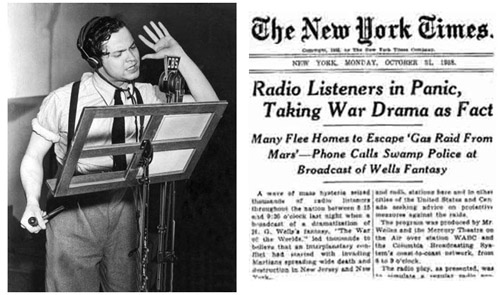 Having recently discussed soundtrack use in role-playing games, I realize it's not all you can do with pre-recorded sound during a session. There are also sound effects, of course (hearing that TARDIS materialize, for example), but a more impactful element would be the pre-recorded sequence. And in modern-era games, this would most often be RADIO.

With recording software, you could record news broadcasts the PCs then hear on the car radio or elsewhere, and from that get a sense of what's happening in the larger world. This technique could be an efficient way to drop exposition and simplify "fact-finding" scenes, especially in a short-ish session where you just want to get things moving. A bit of production on it would add atmosphere, and it emulates what a lot of movies do, especially when they focus not on peripheral characters or places, perfect for zombie stories and alien invasions, really almost anything that bottles the PCs up in a small location as they miss the Big Picture Stuff out in Washington. Go get that extra "frisson" by making something happen on air just as the players are getting used to the device. Should they now run to the station to help the DJ?

Radio WRPG has another effect as well, a psychological one. If you've been accused of "fudging" or yourself want to break the habit, a timeline you can't help but respect could be a curative. The world "out there" is on a railroad track - in other words, the PCs are in survival mode, they can't and won't change the greater outcome, or else you're railroading THEM, which is a no-no - and no matter what happens in the game, history unfolds as it was always going to. Obviously, to make this more than flavor, you want to make it felt even in Small Town USA where the adventure scenario is unfolding, so suddenly the skies change color, or a cure is found for the zombie apocalypse which the PCs could try to replicate in their garage. But it does prevent the GameMaster from molding the story around the players' actions, removing challenges, etc. In effect, the GM is ALSO reacting to what's happening, just like the players. Perhaps there's a table-wide camaraderie in that. (And of course, once you've made them believe it, you can also have prepared different clips for various eventualities, especially if they have some kind of agency on the problem at large. You always have control over WHEN clips are played, so it's not like you give up full dramatic control.)

A non-radio example from a Doctor Who game I ran a few years ago: The TARDIS lands in Woodstock where, as is typical of the show, some kind of alien intervention must be stopped. But the Player Characters just think they're there to have a good time. In the background at all times, recordings of the actual show. I hung my plot onto real world events at Woodstock so that the announcement would have a double meaning, or just create interest for the players. So a woman feels ill and paramedics are called in over the P.A. Does this have anything to do with the plot? If Janice Joplin is the celebrity historical, will the players get her to the stage on time to hear her sing? I used the actual timeline of the show, all the history quite correct, and made things happen at the appropriate hour, no fudging. Not that the players were Woodstock experts, but they still appreciated the challenge I gave myself.

Maybe that Orson Welles War of the Worlds broadcast can be dusted off so that it tells a truer story than we thought. Maybe World War II radio news can spruce up a military campaign. Get the players listening and don't change that dial
Advice Radio RPGs