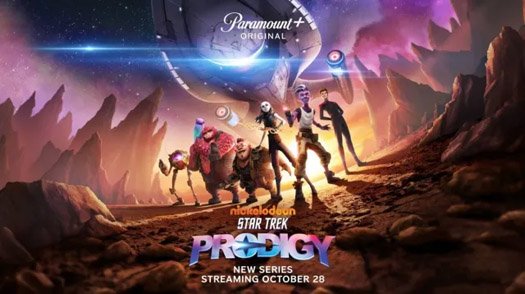 CAPTAIN'S LOG: Star Trek Prodigy begins with the discovery of an abandoned Starfleet ship in the Delta Quadrant.

WHY WE LIKE IT: An obvious love of extra-canonical sources.

WHY WE DON'T: More Star Wars than Star Trek.

REVIEW: Being a co-production with Nickelodeon, I realize Prodigy is not targeted at me, though I still believe it should work 1) for adult Trek fans and 2) feel of a piece with the franchise. You might already sense a strain of disappointment in that opening sentence. To start with I am not a big fan of this time of animation, though the opening double-sized episode looks very good - it certainly helps that there are few humans to populate the uncanny valley. I actually think it looks better than the similar Star Wars: The Bad Batch. But that brings up my main problem with Prodigy to date - it looks and feels like a Star Wars cartoon, not a Star Trek one. There's a chosen one of little means, the hero daughter of a villain (in robes), a translator droid, a lot of aliens that couldn't be played by human actors (but if you're going to use all the tools of animation, you really should), and I could take all that if the show didn't feel the need to pull a classic (not to say cliched) ship race inside a planet sequence. With its vastly diverse crew, there's an IDIC comment to be made, but the pilot doesn't overtly make it. Things can only get better on this score, but I just didn't feel the Trek magic.

The story takes place in the Delta Quadrant, apparently in the year 2383 (a couple years after Lower Decks). We see a Kazon and Voyager nerds might recognize a couple of other references from the show, but I guess the biggest is the Janeway hologram that will help our heroes run the mysterious Starfleet ship (itself, vaguely shaped like Voyager, but with the Kelvin timeline nacelles) found deep in a asteroid. At this point, we still don't know where the "USS Protostar" (eech) comes from, where its crew is, or even what the deal is with a Janeway hologram with an early seasons' hairdo. Like, who wanted that? Or is it a creation of holograms IN the Delta Quadrant, something to do with the EMH program, thus pointing to some native origin for the ship, rather than an Alpha Quadrant one. The interior is a little off-model, to be honest, with a staircase more reminiscent of The Orville than any in Starfleet.

But then, aside from that Kazon, there really aren't any known DQ species. In fact, there are a number of ALPHA species in the cast, who all escape a mining asteroid with the Protostar - a Tellarite, a Caitian, a Medusan (who I assume is from the Alpha Quadrant, but could be from the Beta), and a Brikar, a species pulled from Young Worf's Starfleet Academy series of books. A Lurian (Morn's people) is also seen being enslaved. So are we in the DQ, but closer to the border (and it's the Kazon who's a little lost)? Could be. Or are we close to some kind of wormhole which might also explain the ship? Time might tell. Given how the creators of the show seem to know even their Trek extra-canon well, the Brikar isn't the only reference - the Tellarite language we hear is also out of the Pocket Books canon - I'd be surprised if they'd make this blatant a mistake. But then, who wants a cast of Vidiians and Malons?

The members of the actual cast are well individuated, physically and mentally. The main character is Dal R'El, whose species is unknown even to him. He fancies himself the captain and though he talks to himself a bit much, the fact that he's a risk taker always out of his depth creates good moments of comedy (the stuff in the mine elevator, for example, is quite amusing). Second-billed and probably -in-command is Gwyn, the daughter of the mine's evil exploiter Solum the Diviner who is after the ship and thus the kids. They keep calling her "progeny" which is just confusing on a show called Prodigy, just sayin'. She escapes with the group too, because that family life is a prison for her, and we can eventually look to her to be the smart one (though she leaves home as a prisoner). We see her bond with a just-enslaved Caitian child who meows but doesn't speak. A cute character for the kiddies, but not much else right now as she doesn't leave with the rest. Prisoner Zero is a madness-inducing Medusan in a robot body, a rebel sabotaging the mining operation and of the opinion Dal is the key. This non-binary character acts as the necessary adult of the group (though it depends on what role Janeway will take), but still gets some funny lines. The super-strong Brikar Rok-Tahk has a babyish voice, but isn't dumb, and is accompanied in cuteness and sweetness by Murf, a gelatinous life-form that eats objets and makes subverbal noises (again, shades of The Orville), who is either the ship's new helsmthing or very lucky. Then there's the argumentative (but not too annoying) engineer Jankom Pog, the franchise's first Tellarite main cast member despite the race being one of the founders of the Federation. He's more happy-go-lucky than previous examples, but in terms of animation, the least well realized - his face is a bit stiff and plasticky. At least he's voiced by the biggest name in the cast (aside from Kate Mulgrew obviously), improv legend Jason Mantzoukas. Also in the cast is the Diviner's henchbot Drednok who is cool and sinister as well.

I mentioned the comedic beats, which happily aren't pitched too young (give or take someone stuffing their face in a bowl of raspberries or Murf's burbs), but it's really an action series. There are plenty of robots to fight, Gwyn has a cool piece of jewelry that turns into weapons, and the climax, despite trading on Star Wars, is pretty exciting and cool-looking. Even in non-action moments, the episode's shots are well directed. Great lighting, camera angles and music. Hopefully they didn't throw everything at the pilot with a drop in quality in future episodes.

LESSON: So THAT'S how shields work!

REWATCHABILITY - Medium-High: It introduces everything, and I admit to liking it more on the second watch, but is it Star Trek? Does it fulfill the promise of the Delta Quadrant as a setting? Not sure, but on rewatch I revised my Medium to a Medium-High, so I feel a New Hope--I mean, a new hope. (Cough.)
Star Trek