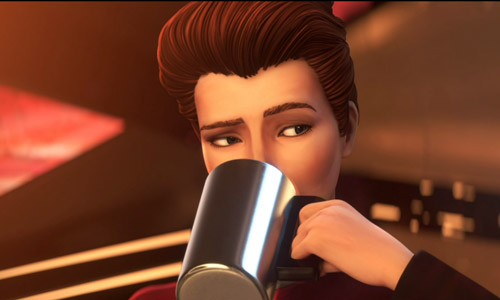 CAPTAIN'S LOG: The Janeway hologram tries to teach the kids how to fly the ship.

WHY WE DON'T: Not sure these 25-minute bites can tell a satisfying story.

REVIEW: The Protostar (still eech) has an NX designation, which means it's an experimental ship. And that's a good thing when you want to introduce new design elements and capabilities. Meant for a small crew of 20ish people, it also has automated targeting and a vehicle replicator that can make shuttles in record time (so is this how Voyager remained stocked up on them?). Anything a bunch of kids from the Delta Quadrant could need to make the series work. And that includes the Janeway training hologram that appeared at the end of Lost and Found. This is the episode where we get to know her...

...and right away, I notice that 7 years of Voyager have trained me not to trust Janeway. She is programmed to "assist the crew on their journey back to Federation space" and I'm, like, what kind of mission is that? One has to GO out of Federation space first before needing to come out of it. Does the ship have various holograms ready for different missions? Seeing as we're in the DQ, Janeway makes for a reasoned choice. Probably a quirk of the writing, but it's an odd phrasing. Especially since the crew being cadets is not a given, but something she "intuits" and Dal lies about. But while the hologram immediately starts out bragging about the Janeway, Super-Captain trope that I hate so much, she's the best thing about the episode. While the real Janeway could be annoyingly smug, this is a trait that works better as a servile hologram (worked for the EMH). Love the bits where she's drinking coffee through the climax. AND Kate Mulgrew gets to do the "Boldly Go" speech for the first time, so that's nice. The ship also has two warp cores and a mysterious Green Lantern battery no one can figure out. So if there's something sinister going on, it'll be in there.

The theme of Starstruck is rebellion against authority. The kids are running from a tyrant, and it's all they know, so it's perhaps natural (if not sound) to reject the Federation as just another tyranny spinning appetizing propaganda. It's all they know, as shown when Rok can only order the swill she was served in the mine at the replicator. Dal names himself captain, but Gwyn, still treated as a prisoner, not only rejects his claim, but tries to convince the others that they've just traded one tyranny for Dal's. Because he doesn't know what he's doing, his leadership is actually dangerous. Running from the Federation leads him to a super-heavy star that almost destroys the ship, and his deactivation of the hologram keeps the solution (actually pulled from a Voyager episode) out of reach. Oh, and it releases Gwyn from the brig, providing a chance at action as Rok tries to stop her, as a shuttle appears around them (a bit hard to follow at times, I'll admit, but an interesting environment). Gwyn's gonna become friends with them, it's clear, and hopefully sooner than later... if Dal doesn't get in his own way.

REWATCHABILITY - Medium: Dangerous stellar phenomena are a boring techno-babble trope in Star Trek, basically manufactured jeopardy while character moments happen - in this case, a fun introduction to this version of Janeway. However, Dal is becoming increasingly annoying.
Star Trek