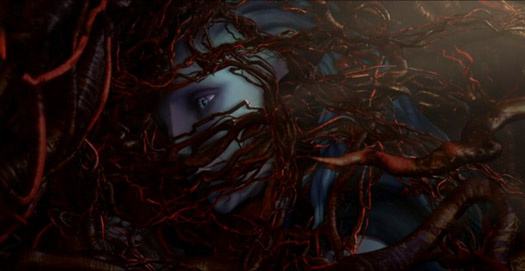 CAPTAIN'S LOG: Marooned on a deadly planet, the crew must work together to get back to the ship.

WHY WE LIKE IT: Gwyn is finally part of the team.

WHY WE DON'T: Ok, so what's the point of the Runaway?

REVIEW: A survival story as the crew walks back to the Protostar while the planet provides a shifting maze to make things difficult. There's a fun conversation about naming the planet "Larry" or perhaps "Murder Planet", and things are made more difficult still by Gwyn's leg being broken (though it's a neat trick to have her moldable weapon turn into a brace). They HAVE to walk because the Runaway - despite its big introduction in Dreamcatcher - gets swallowed up. Meanwhile, Janeway asks herself what the real Janeway would do, and works to clear the ship of the roots entangling it.

Jankom Pog (the last holdout in the game of my remembering the characters' names, for some reason) shows that his Tellarite's argumentative attitude is actually useful. He's the only one with a spacesuit, the result of a disagreement in the previous episode, and he's the only one not freezing. The crew works together to figure out what's happening and fight battles with illusion-casting plant life and "digestive" acid rain, and in this fire, they seem to forge a good partnership with Gwyn (who saves their lives). Even Dal has a nice conversation with her. But it may all be for nought when the Diviner and his evil robot Drednok arrive on Larry, and the team realizes Gwyn called them. She chooses the side of the angels, but her sacrifice separates her from the group and she'll discover (confirm?) that her father believes getting his hands on the ship is more important than her life. There IS regret on his face, so he may not be as irredeemable as he seems, but he still lets his obsession make decisions for him. Once Dal comes to the rescue, we know she's finally a part of the team.

Janeway's attempts to free the ship expose the secret engineering system that's sucking up the ship's energy and can't be shut down. The hologram tries to invoke Janeway's captaincy, but the computer will have none of it. As it turns out, the secret system is an actual protostar which powers the ship (so how its system can "drain" energy is... odd, or perhaps bad writing). Also helps explain why the Diviner wants it so badly, and why it has that stupid name. Engaging the protostar gives the ship "proto-warp" - a cool transformation comes with it - and it sends it... somewhere. We won't know for a while because after only 4 weeks, the show takes a break while we concentrate on Discovery's fourth seasons. Hopefully, the kids watching won't lose interest!

LESSON: Doing the right thing can be defined many ways.

REWATCHABILITY - Medium: A good resolution and some answers, but I feel like now isn't the time to go on hiatus.
Star Trek