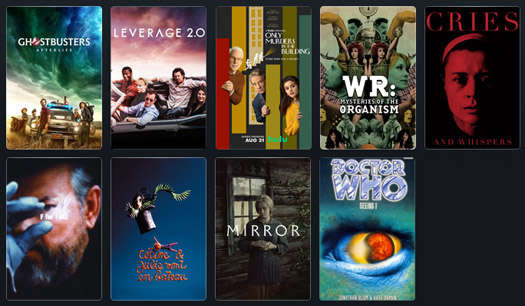 A Whoniversary miracle? I received the new mostly animated DVD of Evil of the Daleks in time for Nov. 23rd! Didn't have time to watch it though. I also received my copy of Outside In Wants to Believe, the second volume of the series covering The X-Files, though the essay of mine published in it is actually about Harsh Realm! Who else remembers that show?

In theaters: I was initially delighted with Jason Reitmen's nostalgiatastic Ghostbusters: Afterlife. Not content to simply provide a Ghostbusters sequel/tribute to Harold Ramis, he imbues a nostaglic quality to the film by essentially tapping the currently popular Amblin Entertainment vibe, with kids spending the summer, in this case, fighting ghosts and Dozer's return. And, I mean, a roller skate diner? Nos. Tal. Gia! I love the kids, personally, and their relationship to the mom. Of course, Paul Rudd is his usual delight. The comedy mostly comes from the characters themselves and there's some great dialog in there. As for the Ghostbusters stuff, Reitman does find new ways to use such monsters as the Stay Puft Marshmallow Man, so it's not that bothersome that the movie is a direct sequel to the original. And then the fan service hits like a ton of bricks (including some particularly pointless and tedious mid and post-credit scenes), and though there are some sweet moments, I feel like the mood of the film changes and you're walking out of the theater on the wrong note. It's not enough to kill the picture, but I still resent the shift.

At home: The Leverage crew takes out more modern-day bad guys in Redemption's back eight episodes, and further makes the point that the villains used to game the system, but now they ARE the system. I certainly feel you, Leverage. And so it often feels less like the gang is running a con on a mark than a take-down mission with everything going wrong. More of a Robin Hood version of Mission: Impossible, in a sense (but that show was always about cons, so...). I was surprised when a couple episodes didn't make use of the full cast - pandemic schedule? - and even used stand-ins for some of the roles. Quality guest stars include Joanna Cassidy, James Marsters, and in the first episode, LeVar Burton as a librarian, so that's really perfect. The season (or series, if they don't make any more) culminates in a brilliant two-parter that pays off both Mr. Wilson's story and the Big Bad that's been dogging the team's heels since the first half. I'm always up for more of this cathartic little show, but if it ends here, it's on a good note.

I'm a podcaster, and though I don't make - or even listen to - true crime podcasts, I think I can safely say Only Murders in the Building isn't anything like producing a true crime podcast (or ANY podcast). That doesn't mean it's not perfectly delightful! There's a murder in the building, and three tenants whose only connection is being fans of the same TC 'cast, decide to investigate it and commit their experience to tape. With Steve Martin and Martin Short in the mix, you know it's going to be amusing, but the surprise here is how funny Selina Gomez is playing off these elder statesmen of comedy. It certainly leads to some good intergenerational humor. The mystery is cleverly told, with one episode standing out by being voiceless, only in part thanks to the inclusion of a deaf-mute character. An impressive roster of guest stars along the way. This hybrid is well worth your attention, and yes, we're set up for a welcome second season.

50 Years of Criterion/1971: Part documentary on the gonzo science of Willhelm Reich who created buzzwords like "orgon energy" and part satirical sex comedy about an activist in Communist Yugoslavia, WR: Mysteries of the Organism is, in a way, a companion piece to Dr. Strangelove in its play on tension and release. Where Strangelove keeps the orgasm at bay and eventually paints it as mutual destruction, WR is sex positive in the extreme, ascribing all the world's ills to the lack of "free love" and orgasms for all. And yet, all completion, all release, is orgasm according to the film's surreal tract, just a corruption of the true orgasm. Political upheaval, murder, intellectualism, sports, art, drugs, mental health care (stock footage of this may disturb), it's all an orgasm substitute, and therefore less satisfying, even pointless. WR is communist art house practically designed to be banned, especially in its own market. Today, a lot of the political subtext will fly over our heads, but what's left is still interesting, though bizarre.
Paired Short: In Crocus, stiff drawn figures pass the pickle (really and surreally), but it made me wonder if it was just another task/duty for the lady, a kind of escape, or both. Either way, #feminism.

1972: A woman is dying and three women attend her, two of them her sisters, the other a maid closer to the ailing Agnes than either can imagine, in Bergman's beautifully shot Cries and Whispers. This is what grief - and waiting for grief - looks like. A boredom, a familial kindness, a false sense of rapport (and ensuing false promises), an awkwardness and shame, and a space to reflect on one's own pain, then probably feel guilty for that selfishness. Although in Anna the maid, her pain leads her to a different, more caring attitude that highlights the sisters' hypocrisy. The climax of the film presents an impossibility, whether dream or piece of magical realism, we can't be sure, but it highlights grief as a haunting, metaphorical if not veritable. A haunting that exposes every character's relationship with death - rejection, fear, or embrace? Those are some of our choices. It's Bergman, so there's a sense that the question is wrapped in one's relationship with God, and you might be able to substitute love for the sister with the love demanded by faith. You know, if you need another layer of the onion to pull back (that's a crying joke).
Paired Short: Chantal Akerman is building herself up as the dramatist of the mundane with La chambre, a 360-degree cinematic still life of her one-room apartment in New York. I like seeing her style develop, but it's still a simple experiment.

1973: Orson Welles' documentary on the greatest art forger in the world (and his biographer, also a con artist of sorts, whose story intersects with Howard Hughes' and thus with Citizen Kane's), F for Fake, delightfully matches form to subject. You're never quite sure what to believe, and Welles' free-wheeling narration plays as many tricks with our perception as does his maverick editing. It's not explicitly discussed, but movies are a kind of con themselves, a juxtaposition of images that make you believe in a continuous narrative. Just because we show a woman boarding a train doesn't mean she's the mother of the boy waiting on the platform, and so on. But film opens you up to believing, and F for Fake, with its documentary trappings, has the bent of truth, only filtered through the lens of the raconteur. What to believe? And does believing make it true? Valuable? Welles has a lot of fun here, but he throws up some intriguing questions about art.
Paired Short: I'm sure Charles Burnett's The Horse has hidden meanings if I could only figure them out, but like the ePONYmous horse (sorry), I felt like I was waiting for someone to put me out of my misery. 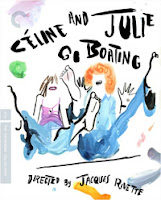 1974: If any movie has a claim to approaching the style of French Nouveau Roman, it's Jacques Rivette's Céline et Julie vont en bateau, a loopy rule-breaking quantum comedy in which the two heroines don't do much boating at all. Knowing a couple of expressions using the French word for boat, "bateau", may be in order. For starters, "monter un bateau" (to build a boat) means concocting a tall tale, which this movie definitely is (Céline is a pathological liar), while "aller en bateau" (taking a boat ride) means getting caught up in a story you're being told, which is how the two women get involved in a hoary melodrama/haunting thanks to Proustian editing and hallucinogenic candy. And then there's the one about being in the same boat (an expression that translates one-for-one in French), which justifies the motif of interchangeability that permeates the film. Though Céline and Julie are completely different characters, they are able to take each other's places in the haunted house's play (13 knocks, everyone!), but also in each other's lives (where Dominique Labourier has a career moment). Alchemical word play is also part of the game, as are the strange commonalities between the two women and the characters of the house. At more than 3 hours, in large part because scenes repeat with only slight additions several times, I thought I would get bored or frustrated with Rivette faffing about with movie logic, but no, it all definitely pays off in a wonderfully strange way.
Paired Short: What I'm missing from Christo’s Valley Curtain is the artist (or someone!) discussing the artistic approach. The doc feels thin to me despite it making a point just through blue-collar reaction before and after the deployment of his giant orange eyesore. 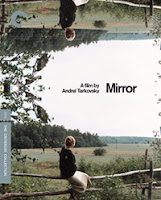 1975: A poem about immortality. Stock footage of Russian history. Actors playing family members across generations. A boy with déjà vu. Soulful Margarita Terekhova's face in a Renaissance painting. Repeated motifs. To me, Andrei Tarkovsky's Mirror seems to be about Russian permanence - the land and culture, more than the Soviet regime - though I can't claim to know enough history to fully make sense of it. But the meditation on FAMILY history - lyrically moving back and forth through time - is more universal. Circumstance, genetics and culture conspire to make us "mirror" our parents and grandparents, even as we rebel against it. Something, a spirit, lives on though we ourselves might die. Tarkovsky is at his dreamiest here, which means the film is beautiful, but also just out of reach, something I appreciate, but don't always connect with.
Paired Short: Obviously, gender wasn't as well understood in '75 as it is today, but Agnes Varda's Women Reply nevertheless packs a poignant punch, right in the patriarchy's glass jaw.

Books: You're usually in good hands with Kate Orman and Jonathan Blum writing Doctor Who, and Seeing I is no exception. With its strong cyberpunk vibe, I feel like it partners with Orman's 6th Doctor novel, Blue Box, like wine to its cheese. But though the world-building is good, this is all about allowing unloved companion Sam to grow up over a longer-than-usual timeline, and making her the hero of a book. It's achieved extremely well, though if you're not a fan of NuWho's obsession with making companions fall for the Doctor, there are a few irritating pages waiting for you. Even beyond that, it often feels like Russell T Davies read THIS book while planning out the show's return. Meanwhile, the Doctor faces a threat that's quite beyond the norm, and his multi-year ordeal is beautifully anchored in his particular psychology. The book keeps going back and forth between the two, and neither part outshines the other. And, well, I love the authors' style, flair and humor, so even if the climax needs to slow the heck down, I can't quite complain. Better days for Sam? Or will it take a while for Seeing I to have its effect on later writers?
Doctor Who Geekly roundup