What a Card: Halkan Council

Being a look back at cards from the Star Trek CCG, and what I thought of them back when they were fresh and new... in EPISODE order. The Mirror Universe's Time Location! 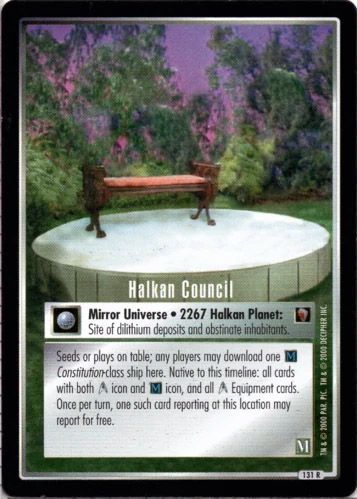 PICTURE: Decipher had the unenviable task of removing all the characters from this shot, Halkans and Starfleet personnel alike. Unfortunately, the heavy CGI has given this platform and bench a totally disconnected feel. The ugly sound stage look typical of TOS doesn't help with that either. Given that the Halkans are mentioned in the lore, maybe keeping them there would have been alright (they ARE the Council, after all). As far as design issues go, that gray Mirror Quadrant icon in the lower right corner looks like it doesn't belong there. A poor 0.6, and that's for the designers' appreciated effort.

LORE: Short, but fun. I like the way the Halkans are described, at any rate. A better than average 3.2.

TREK SENSE: Representing Mine Dilithium's past, roughly matching Sherman's Peak's era (too bad you can't move from one TL to the other by the same means used to go between universes at regular spaceline locations), Halkan Council is where OS Mirror personnel are native to. The download of a Mirror Constitution-class ship is a bit providential if you ask me, but the story has to start somewhere, and the Terran Empire's interest in this planet's riches explains their presence. OS Equipment may report here no matter its home quadrant since the mirrors used the same stuff we did, plus a few more (although Romulan Cloaking Device is debatable). As for the free report each turn, it follows the usual rationale that if personnel and things are normally somewhere, they may be counted on to be there already. The past Halkan Planet is pretty specific, but then again, we've never seen OS Terran Empire personnel anywhere else! Doesn't necessarily do enough, but a competent 3.7.

STOCKABILITY: Requiring fewer cards to enable than Sherman's Peak, it's a good starting point for Terran Empire decks. With a good opening hand, you can drop 4 TE cards on the table (minimum) in the first turn, as you download a ship, it downloads a personnel, you report another for free, then one as your regular card play. Then, you can use a Temporal Vortex (called up through Q the Referee if necessary) to head for the present. First stop: Mine Dilithium, which is easy enough and will give a boost to your OS ship's paltry RANGE. You can keep free-reporting personnel at the Council and go back any time to beam them aboard (the Vortex is a two-way street) or abandon the TL and use Crew Reassignment to report TE personnel, OS or not, aboard instead. Once you leave the Quadrant for the real world, you won't want to return if you can help it, though while still in the MQ, everything's really close together anyway. It's also a pretty safe card to use despite its allowing both players to download ships there: What are the chances of both players using the Original Series Terran Empire? Oh, it can happen since it's a good "affiliation", but I wouldn't worry too much about it. Halkan Council's success is practically predicated on the Terran Empire's power, and it enables it well. A 4.3.