What a Card: I.S.S. Constitution

Being a look back at cards from the Star Trek CCG, and what I thought of them back when they were fresh and new... in EPISODE order. Okay, let's get into Mirror ships... 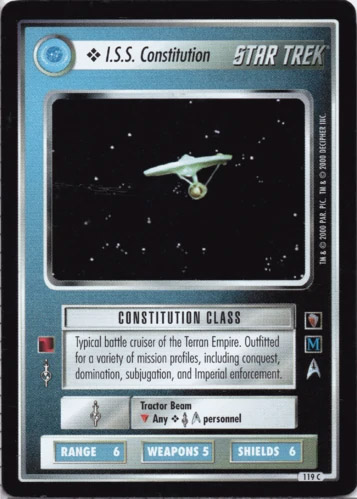 PICTURE: At this tiny size, the Constitution is far from impressive (or in focus, for that matter), which may suit a universal model, but not so much the war vessel it's supposed to be. At this distance, the deflector dish looks conical, so more like a weapon, and that's a positive. I'm gonna go with an average 2.9.

LORE: Fun stuff. They use the usually Klingon/Romulan "battle cruiser" appellation, and the various mission profiles are pretty close in meaning. A great comment on the Terran Empire of the time. I'm a bit disappointed Decipher/Paramount never changed the name of the class (or at least the universal's name, since I agree the classes are equivalent for game purposes), because I don't see where a Constitution would be a revered enough principle in the mirror universe to deserve getting a ship named after it. No doubt they have some kind of EVIL constitution. Whatever. The lore itself is excellent, so a 4.2.

TREK SENSE: The Mirror Universe equivalent of the Starship Constitution has different staffing, of course, to encourage the appropriate personnel to be aboard, and since these were often deep space missions, the personnel live aboard, which explains the special download. Because it's a universal ship, it can be assumed that personnel aboard are just as generic, so that download is for a universal personnel, both from the Empire AND the OS period. Very good. The staffing doesn't work like that though, and we'd have to buy Captain Bashir or Marauder would be just as efficient at staffing this old ship than First Officer Spock or Tiberius Kirk. As for attributes, it's the same as its twin, the Starship Constitution, but it has one more point in Weapons. That goes with the more warlike nature of the Mirror Universe. I might have balanced things some way so that it wasn't as strong as the unique Starship Enterprise, but hey, it doesn't have a matching commander, so there. I'd say that gets the score to 3.7.

STOCKABILITY: Well, while the ISS Constitution has the advantage of bypassing the Mirror Quadrant with Spacedoor, and can be staffed (with Crew Reassignment or not) by a non-AU Terran Empire personnel; the Rebel Interceptor pretty much affords the same thing, with better attributes and landing capability to boot. Of course, the Constitution can download its staffing requirement, even if only in the form of a universal OS Terran. That's one of 3 personnel, none better than support, but you can get under way right away. There's also the small matter of '45 Dom Perignon. Spacedoor the Constitution, download its universal staffer, and later break open a bottle of champagne to turn the ship into the ISS Enterprise, Enterprise-A or either Starship Enterprise, then use THAT ship's special download for a better personnel or whatnot. Not bypassing the quadrant, you can get at the ship through Halkan Council, trading time travel for Spacedoor as a requirement. Stats are pretty bad on the ISS model, and can't be boosted by Captain's Log, but Mr. Scott will add +2 to all its attributes as well as any Constitution-class, as would Chief Engineer Scott here, and the Columbus can report aboard for landing and extended range capability. Holds its own at 3.5.