What a Card: I.S.S. Enterprise

Being a look back at cards from the Star Trek CCG, and what I thought of them back when they were fresh and new... in EPISODE order. If you only get ONE Mirror ship... 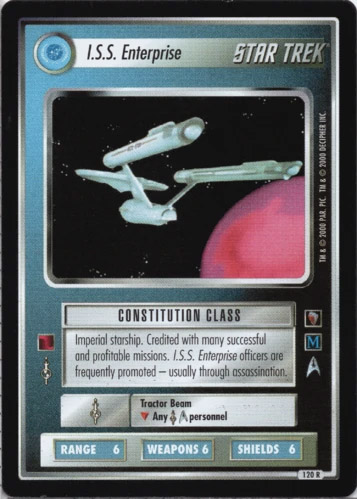 PICTURE: The skewed perspective makes the image like a funhouse mirror (right expansion for it) and blows up the nacelles to outrageously long proportions (pretty detailed considering the overall definition of the picture). I like that, and the planet isn't a bad spot of color (yeah, I know, pink is real hokey), and all without cheating. That is, it's all really from the episode "Mirror, Mirror". Distinctive enough for a 4.

LORE: Basically likeable, even if the stuff about the crew's promotions is a little beside the point (still a pretty tasty nugget). Doesn't the second sentence sound like a Ferengi ship? "Profit"-able... "Credit"-ed... Anyway, a fun 3.7.

TREK SENSE: It's very close to the ISS Constitution, and should share its successes and failures. Successes: The staffing encourages the right personnel to be aboard. Being on a deep space mission, its crew would live aboard, so the download is reasonable and appropriate as to faction/universe and era. The ship is well-known, and so is its crew. Any unique personnel with both icons was DEFINITELY on the ISS Enterprise. The Mirror Universe being so bloodthirsty, the Weapons are up a point from the ship's Alpha Quadrant counterpart. Failures: Basically that the lone staffing icon makes present-day Terrans adept at working these old time controls. Some have mentioned to me that the Terran rebels may have had to do with what they could salvage, so that 100+ year-old technology wouldn't be a mystery to them. There is some sense in that. There's no reason to make a ship the "opposite" of another for gameplay purposes, but I thought I'd mention the lack of any such mention here. Just a note that doesn't affect the 3.8 I'm giving it.

STOCKABILITY: The ISS Enterprise reports for free on the first turn to the Halkan Council, from where it must basically travel to the Mirror Quadrant using time travel, and then perhaps to another quadrant for lack of missions there. You can drop the Halkan Council altogether with an AU Door or Space-Time Portal, but you might have to wait for the ship to come into your hand (downloading with Wall of Ships is fine, but you have to get at THAT card). Once you do have it in play however, you're not even limited to staffing it with OS personnel, because all it asks for is a Terran. That means the rebels too, and any era's Terrans will easily report aboard via Crew Reassignment. Fine, but the download is for a unique OS personnel, and there are plenty of good ones to choose from, including two possible matching commanders, James Tiberius Kirk (and his amazing deadly Tantalus Field) and the ultra-rare First Officer Spock (cool in his own right). Either using Dedication Plaque and Captain's Log sets the usually low attributes to 8-9-9, while various other personnel jack up those stats even more: Chief Engineer Scott and Mr. Scott aboard together is 12-13-13, add the mirror Chekov for 13-14-13, and we're not even using the Enterprise bonuses such as Wall of Ships! You bet you could use Emblem of the Empire to allow the ship to attack now! Speaking of being an Enterprise, I have to mention its relationship to such cards as The Emperor's New Cloak (to score points), and of course, the aforementioned Wall of Ships. Take that effect into account, and the attributes we had going are now 14-15-14. Get Demora Sulu and Guinan aboard too, and you have a monster 15-18-17 OS ship. Who'd have thought? In any case, a great ship with a download for a great personnel (whoever it is you choose), and you could always start it in the Alpha Quadrant with a cheap Spacedoor/ISS Constitution/'45 Dom Perignon, or a pricier but faster Admiral Riker reporting for free at the Office of the President. A cool 4.3.

TOTAL: 15.8 (79%) There are three Enterprises that find themselves in or near the Top 5, and this is one of them.
CCGs Star Trek