Who's the Bronze Age Catwoman?

Who's This? NOT Batman's wife. 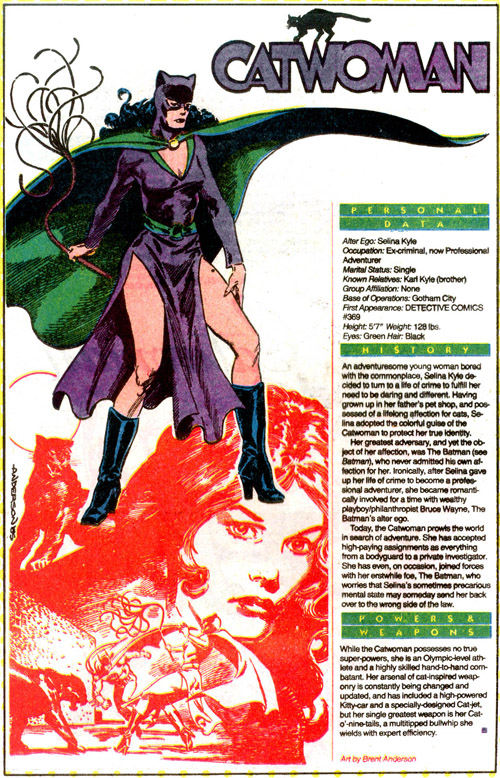 The facts: In 1966, after many years since her last appearance, Catwoman made a dual comeback - as one of the villains in the Batman '66 movie (and subsequent show where she would be played by two more actresses) and in the comics themselves (surprisingly, in a Lois Lane #70-71 before going back to the Bat-books. Costumes varied until 1975, when she adopted the classic purple and green look for good. Putting in about a hundred appearances through the Silver and Bronze ages, the Batman writers developed her romance with Batman and pushed her to the side of the angels, a partner after Robin left the Caped Crusader's side. But after the Crisis, Frank Miller's Year One (1987) and then Mindy Newell's mini-series (1989) revised the character to the point where she was a completely different character. But you'll have to decide her Earth-1 fate yourself.
How you could have heard of her: Well Catwoman is still recognizably Catwoman no matter what iteration you're looking at.
Example story: Batman #345-346 (March-April 1982) by Bruce Jones, Trevor von Eeden and Pablo Marcos 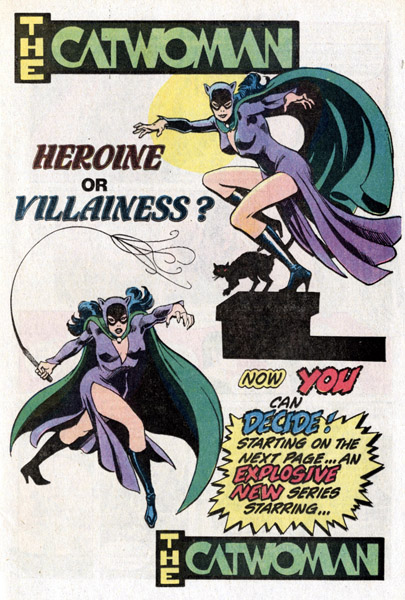 The early-80s, reformed Catwoman got a two-part solo story in the back of the Batman series, and though she wouldn't get her own monthly until more than decade later, it teases how one might have been handled in the pre-Crisis era.

It's a bit of a horror story, actually, starting on a nightmare in which Selina weds Bruce Wayne before everyone turns on her for being a literal cat-woman. She awakens on a train. A TERROR TRAIN! 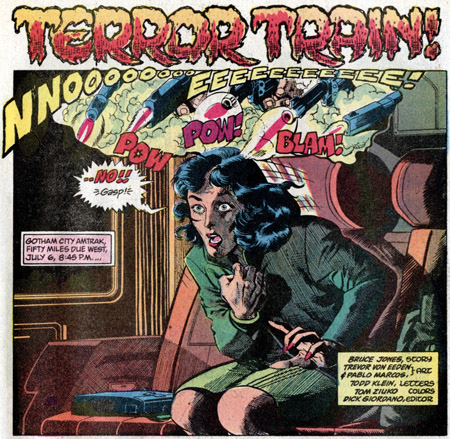 On my birthday. It really IS terrifying. She's leaving Gotham on the heels of that Cat-Man story I spoiled a couple weeks ago, feeling like Bruce/Batman couldn't really love her because of her past. You don't need to be Freud to figure the dream out. She heads for the club car, but is held at gunpoint by some guy and she in NO MOOD. 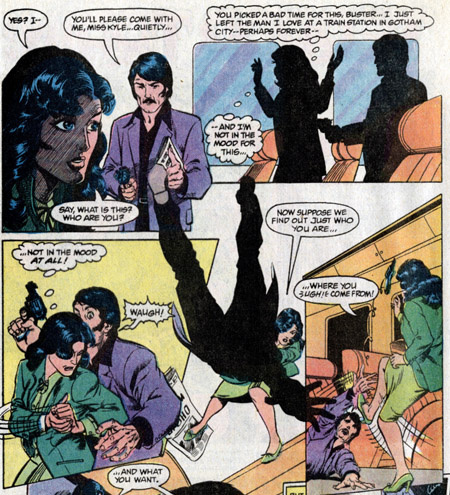 Turns out, dude's a cop. His boss, Detective Sergeant Stuart wants to employ the services of the Catwoman to help solve the "Vanishing Train Case" and stop a third passenger train from disappearing between Gotham and Chicago (the Mobster Line, I guess), even though, a few days later, the trains and everyone aboard reappeared safe and sound, albeit with a bit of amnesia and tales of ghosts and demons. Selina Kyle being no stranger to strange criminal schemes may well be the right person to figure this out. Why would you "borrow" a train and steal nothing on it? It's not a drug thing, they assure her. She takes the case (out of cat-like curiosity - in the modern era, she'd have asked for cash), does her homework and in full costume, boards the next targeted train. As the train goes through a tunnel, it moves through... a graveyard? 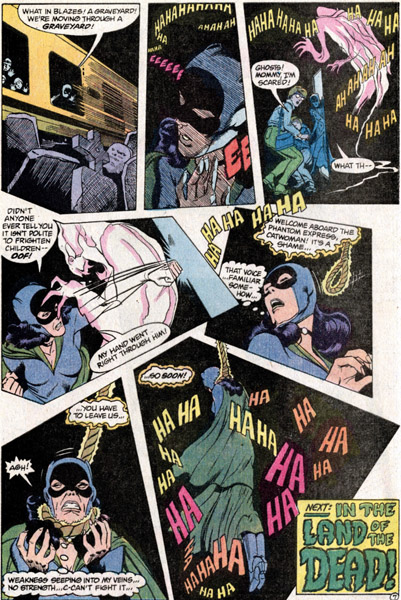 You might believe in the haunting if not for a crucial clue: Catwoman recognizes the voice speaking for the Phantom Train. But anyway, quite the cliffhanger. Hey, Comics Code Authority! Do your job! You're freaking me out the day after my 11th birthday!

As the story picks up in the next issue, Catwoman wakes up while being carried out of the train, apparently taken down before she choked to death. I may be a day later, but Selina is still IN NO MOOD! 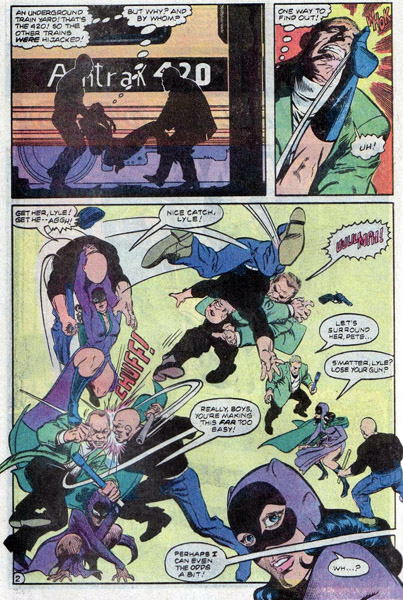 Whose voice is that? As she gets thrown down by her own cat-o'nine-tails, she finds Detective Stuart is the mastermind behind the hijackings. He tells her she was seen hanged by witnesses now on a train heading for Chicago. No one's gonna be looking for her. So why? Well, you probably won't believe this, but the story starts in 1945, when a German spy inscribes the formula for the H-bomb on a diamond and fearing capture by the FBI, quickly puts it on a Persian cat's collar. By the time he returns to it, the cat and its owner are catching a train to Chicago for a pet show. The pursuing spy - Stuart's father - falls off the train after a struggle with the cat's owner - SELINA's father! - so this is both revenge and trying to find the diamond on one of these old rail cars. Seeing as he now plans to kill Catwoman (as opposed to really killing by hanging - one does need to gloat), he tells her the whole plan, yadda yadda yadda. 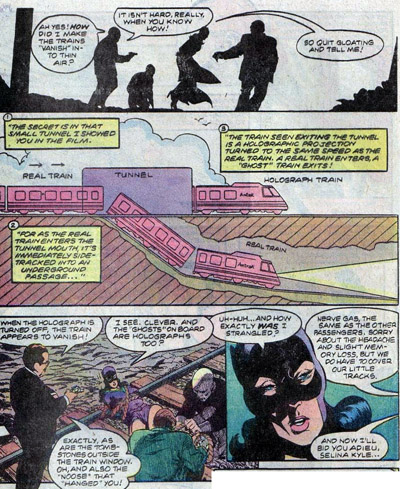 Oh, and once he has the diamond (it's in the last train, the 420, always the last place you look), he'll return to East Germany, give them the bomb, and usher in a Fourth Reich. Guy is completely bananas. Selina is fated to be run over by the 420 as it heads back to Chicago. But Stuart is shocked to find her alive and well aboard the train, his men at her feet! 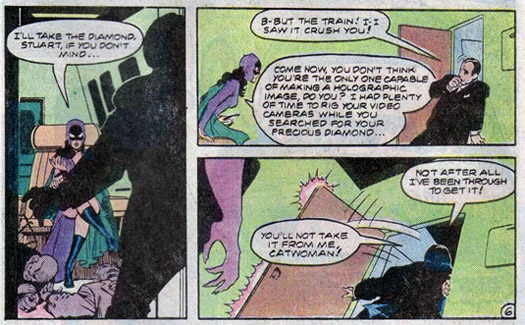 Catwoman - holographics expert. Well, I'm not sure about that, but she IS a WHIP expert, so the next part (haha) tracks. Stuart isn't a very good train conductor and puts the 420 on a collision course only Catwoman can prevent! 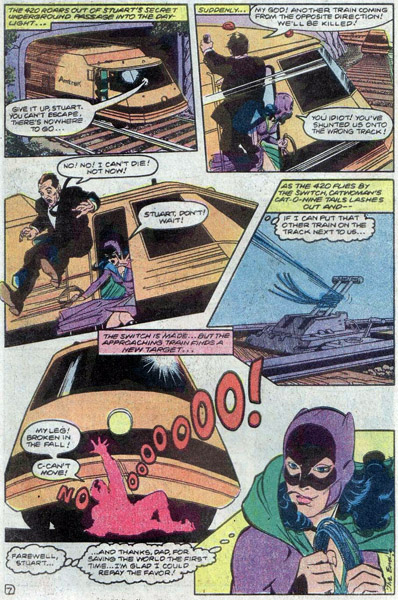 And so he gets a taste of his father's fate. So can we now answer the big question asked at the top of the story? Catwoman - heroine or villainess? I know which side the writer is on. Selina absolutely did not push the guy in front of another train, and he was a Nazi not worth crying over. Furthermore, her dad was a hero and helped win World War II, albeit incidentally. So she has heroic DNA, but maybe they're saying it's hero-adjacent.

She would return to Gotham in due course, and though not in her own series, certainly at Batman's side as a heroine.

Who's Next? An old-school musketeer.
Comics Who's This?

LiamKav said…
If we were including today's version I guess the next entry would be "ALMOST Batman's wife".
November 22, 2021 at 6:56 AM