Who's This? The man with nine lives. 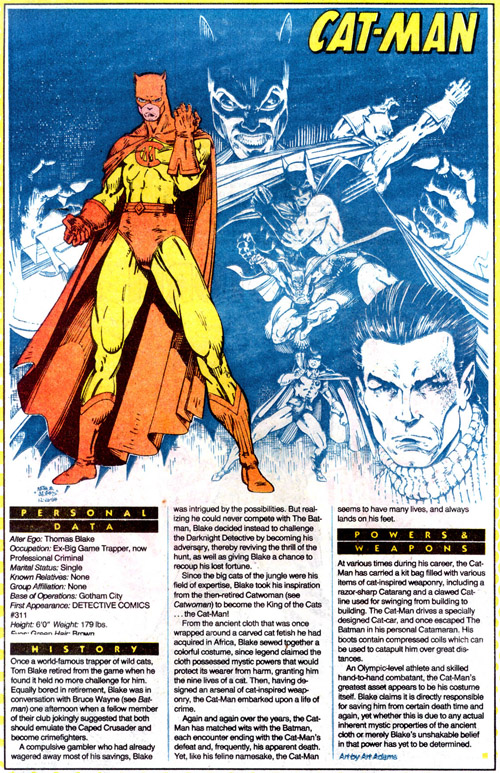 The facts: Cat-Man was a silly crossbreed between Batman and Catwoman created by Bill Finger and Jim Mooney for Detective Comics #311 (January 1963) and initially, he's just like Catwoman, committing cat-inspired crimes. In his next appearance, he had a magical costume that supposedly gave him nine lives. He appeared seldom and by the 90s, was a joke. In Green Arrow #16, toy-breaker Brad Meltzer suggests he was eaten by Monsieur Mallah (gorillas eating cats? that's not even good irony). The character is finally rehabilitated in 2005 by toy fixer Gail Simone who gives him back his mojo, a proper personality, and leadership of her Secret Six. There he thrives as the world's first bisexual antihero and one of the best characters in the series (noted for having a LOT of great characters).
How you could have heard of him: The New52 had a short-lived Secret Six series that also included Catman (he loses the hyphen after Crisis), and though different versions of the character exist in non-comics media, his appearance in The Brave and the Bold cartoon is a proper one.
Example story: Detective Comics #509 (December 1981) "Nine Lives Has the Cat..." by Gerry Conway, Don Newton and Dan Adkins 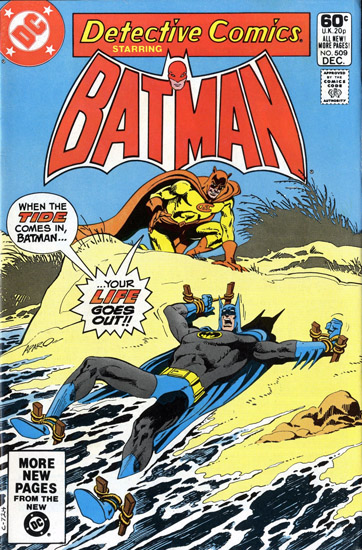 But what was Cat-Man like between the silliness of the Silver Age and the loserdom of the 90s? Did he have a shot at a first rehabilitation in the Bronze Age? Detective #509 tells a Cat-Man story in the context of Bruce Wayne's love affair with reformed Selina Kyle (more on this in a couple weeks). The non-reformed Thomas Blake stalks the couple, or rather, Selina herself, because she goes home alone and it looks like at least one cat is in heat! 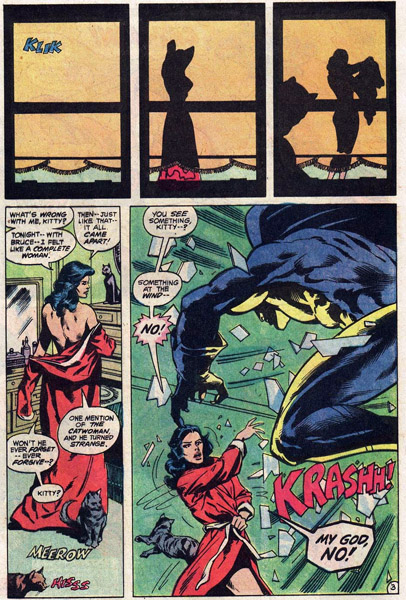 She's surprised to see him alive (but remember the adage) and he's there to recover something she took. But what? She just has time to rip at his mask and see his disfigurement (he "died" in a scalding geyser) before he takes her away and we cut to other matters. Later that night, Batman is alerted to a break-in at the Wayne Institute in Long Island (it's clear Gerry Conway is treating Gotham as New York), where biological research is conducted. It's also where a piece of Cat-Man's magical nine-lived costume is being studied. Ah, so THAT'S it. The two _at-Men get there pretty much at the same time and fighting ensues. 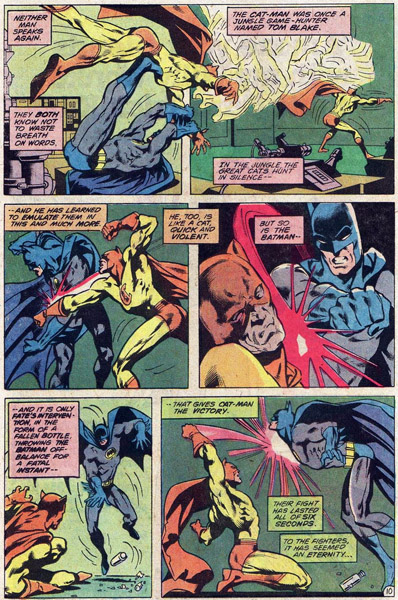 Conway calls Batman stepping on a bottle bad luck, but it's Cat-Man. Cats are always knocking things over on purpose. When Batman wakes up, he's tied up on the beach as per the cover, and the villain is making Goldfinger jokes ("I want you to diiiiiiiie, Batman"), which certainly goes with the bright costume. He's off to kill Selina, and leaves Batman to the rising tide, but when the sand goes soft, the Bat is able to pull the stakes out. Things are not going Cat-Man's way as he discovers the piece of costume doesn't heal his face. 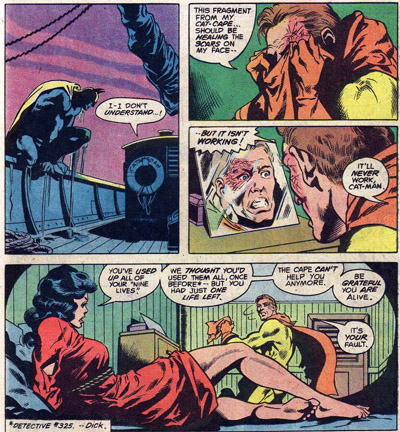 Apparently, Catwoman used up the last life in the cloth when she healed herself back in the day. Before he can take revenge, Batman shows up and they fight again, except this time, Thomas Blake is pushed overboard where irony strikes! 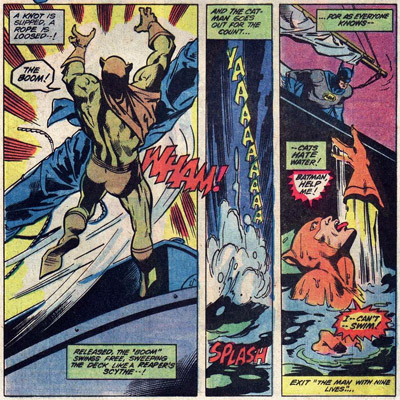 Cats hate water, so perfect human specimen Thomas Blake can't swim. And that, friends, is why Cat-Man can't catch a break as a villain. They always reduce him to the cat gimmick. What's next, Batman defeating him with a laser pointer? And here, when they say "exit", do they mean that Batman let him drown?! Nah, he survives to get his suit stolen by his cell mate a couple years later, proving they really didn't know what to do with him.

I think series like Suicide Squad and, in this case, Secret Six serve as proof that there really aren't any bad characters, just creators with lack of vision for such characters. Cat-Man was never more than a gimmick, and then, by lack of imagination, a joke until Gail Simone saved him from the jaws of infamy. So don't give up on anyone, you never know when their time will come!

Who's Next? Batman's wife.
Batman Comics Who's This?