Who's This? An old-school musketeer. 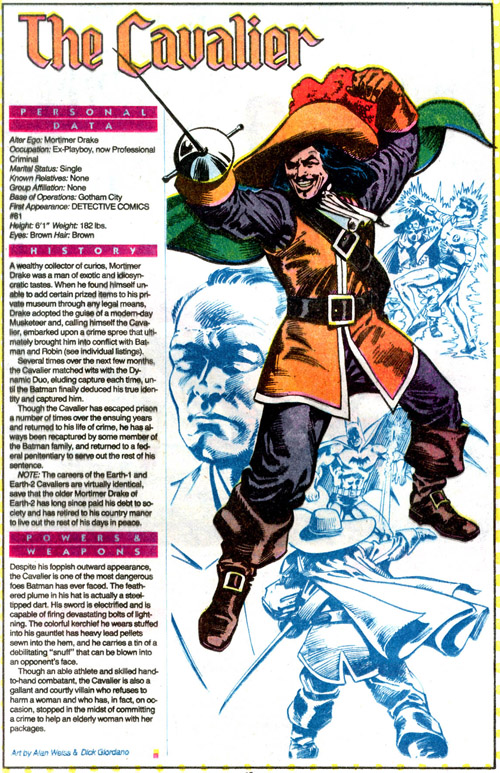 The facts: Created by Don Cameron and Bob Kane, the Cavalier first appeared in Detective Comics #81 (November 1943) and made a few return engagements in the Golden Age (basically, until Batman finally captured him). He was a frustrated collector of nice things, who took up theft using musketeer-inspired modus operandi and codes of conduct. 30 years later, he appears in the Bronze Age with a few tweaks, but tangling with Wonder Woman, then Batgirl and Batwoman, in the later case as a partner to Killer Moth. Maybe DC felt his foppish/romantic look was a better fit for female heroes? I don't know, they just made him a chauvinist in those stories. Post-Crisis, they redesigned him for Legends of the Dark Knight's "Blades" (but it's not Mortimer Drake), and the real deal is eventually seen here and there, notably imprisoned at Arkham Asylum. In the mid-2000s, they reveal he and Captain Stingaree - another obscure swashbuckling Bat-villain - are in a relationship.
How you could have heard of him: Rebirth shows the Cavalier wearing the LotDK look, but no word as to whether he's Drake or the other guy. In any case, the character is killed on a Suicide Squad mission. Since he's a little silly, he of course appeared in several episodes of Batman: The Brave and the Bold (also, in DC Super Hero Girls).
Example story: Batman #22 (April-May 1944) "The Cavalier Rides Again" by Bill Finger, Jack Burnley and Charles Paris 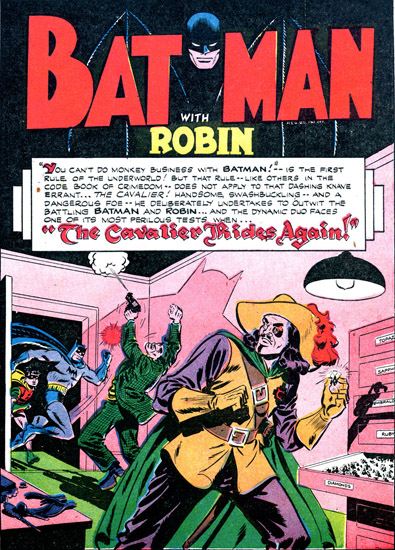 Flamboyant? Sure. Loves the finer things? Definitely. But is he really foppish? Not sure. Consider that there's a European Batman who looks like this, more or less. In this, his first return engagement, the Cavalier lures Batman and Robin into the open on purpose to have them fall into the simplest of traps. 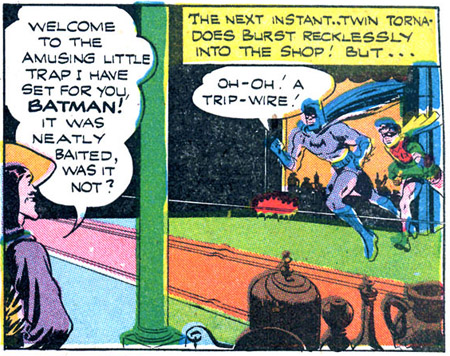 They acrobatically get out of being wrapped in a bolt of cloth (which you know would have been soft on the skin) and Batman snatches the refined criminal's electric sword away from him. Except... 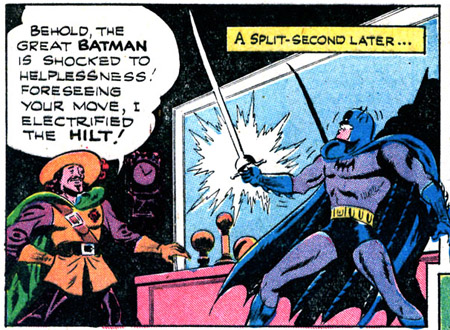 This is a villain who learns from past encounters and plays chess with his opponent. He hits the two crime fighters upside the head with antiques and stuffs them into an old armoire and a chest. Even leaves them a note in case they get free. What a gentleman! With the night's excitement over, Mortimer Drake dresses to the nines and heads out for his club's annual dinner.

Of course, the Dynamic Duo does escape and the note is an elaborate clue to the Cavalier's next crime. They don't solve it right away because Bruce Wayne ALSO has that dinner to go to. A "quirk of fate" seats the two men together, unawares! These men of action probably shouldn't bother with these events. The following night, the Cavalier and his henchman climb into the diamonds cutters and in leisurely fashion, start selecting only the best cuts for the loot.

It took the better part of a day, but Batman figured out the "Dutch" clue seeing as Holland is the diamond center of the world, etc., etc., and while Robin almost gets drilled in the beck by the Cavalier's goon (why is HE the more dangerous crook?), the Dark Knight goes head to head with... Batroc?! 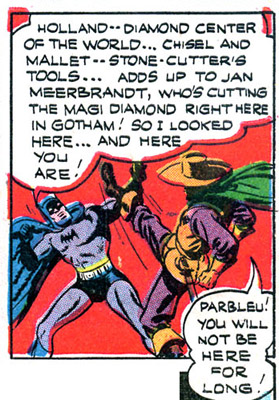 "Parbleu"? If the idea is that the Cavalier feigns a French accent to hide his identity, I like it! But though Batman prevails in the savate department, Drake blows his snuff box and the heroes and leaves them in sneezing fits. They soon corner him on the roof, where his "varlets" are waiting to get in on the action. The Duo cleans up, but the Cavalier uses the distraction to get away, but not with his treasure. It's enough to "break the spirit of a strong man".

In the next couple panels, Batman is asking the same kind of question. Those collector cases are terribly empty, but Mortimer Drake survives to try and try again.

I quite like the idea of a Batman rogue whose gimmick is collecting bougie stuff. There's the same variety as committing, say, crimes based on jokes, cats or birds, but it actually makes sense that a top-one-percenter would get his kicks assembling an illegal collection of the beautiful, rare or sophisticated items. It's too bad the Cavalier fell out of fashion. This story makes him out to be a criminal version of Bruce Wayne, and just as smart if not quit as capable. Well, it IS Batman's book after all.

Who's Next? A traveler inside earth.
Batman Comics Golden Age Who's This?