Who's the Golden Age Catwoman?

Who's This? Batman's future wife. 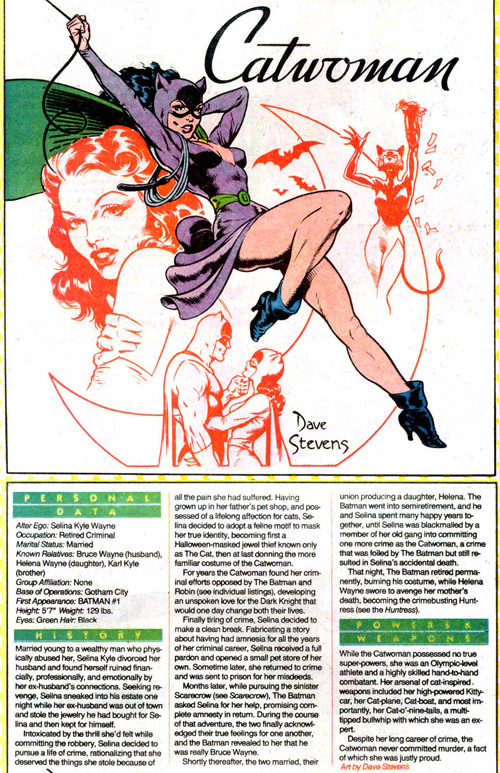 The facts: Historically, Catwoman first appeared in Batman #1 (Spring 1940) as "The Cat", created by Bill Finger and Bob Kane, and became one of the most enduring members of the Batman Family, not just as a foe, but as an ally able to hold her own series as well. But hold on, if we're just talking about the Golden Age (or "Earth-2") Catwoman, things are a bit more discreet. Her first appearance is as a cat burglar with no costume, her second (Batman #3) has her wearing a cat head. Eventually, she does get herself into the slinky purple and green and because Batman is one of the characters to survive through the 50s, it seems like her timeline goes uninterrupted. The sillier 50s make good use of her as a romantic interest who goes in and out of crime, but after 1954, she disappears from the comics (in favor of Batwoman?) until 1966, which not coincidentally is the same year she stars in a movie. So let's put the line there. As it turns out, the Golden Age heroes lived on Earth-2, and in that timeline, updated to make Batman older (and Commissioner Gordon's successor), it was revealed in the 1970s that THIS Catwoman married Bruce Wayne and became the mother of the Huntress. We learn this pretty much at the same time as we're informed she died.
How you could have heard of her: Well, everyone's heard of Catwoman, it's just a matter of knowing the differences between the original and the current-day model (or even the Silver Age model). The New52's Earth-2 series had a Selina Kyle married to Bruce Wayne and mother to Huntress at least.
Example story: Batman #35 (June 1946) "Nine Lives has the Catwoman!" by Bill Finger, Bob Kane and Ray Burnley 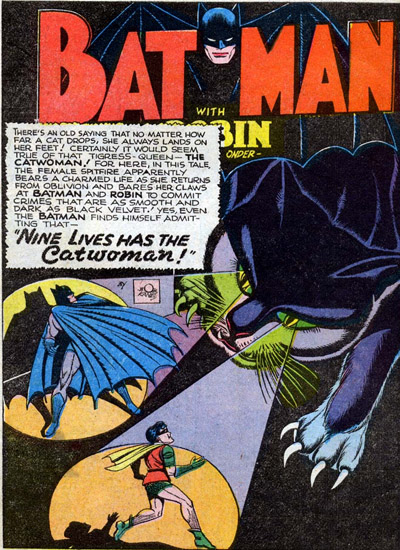 If you thought making Catwoman a blonde on the Animated Series was off-model, you just didn't go back far enough, because yeah, that was her hair color in the Golden Age (or at least part of the time). Here she is in prison using a "catseye" to hypnotize her way out before her roots start showing: 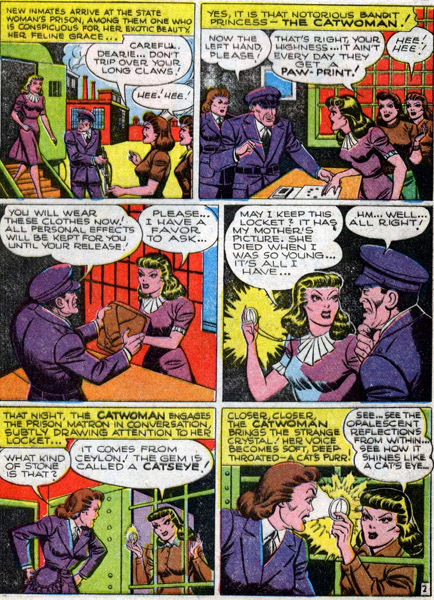 Next stop: Rebuilding her criminal empire. Tough, because her former associates are sick of Batman breaking up their schemes. She needs to rebuild confidence in her abilities. Her black cat Hecate (also in the Batman '66 movie) gives her an idea. Criminals are a superstitious lot (where have I heard that one before?), so what if she proves she can't be killed? With the help of the two last goons loyal to her, she builds a new HQ, the Cat-acombs and she has her former henchmen convene there to mess with their heads. 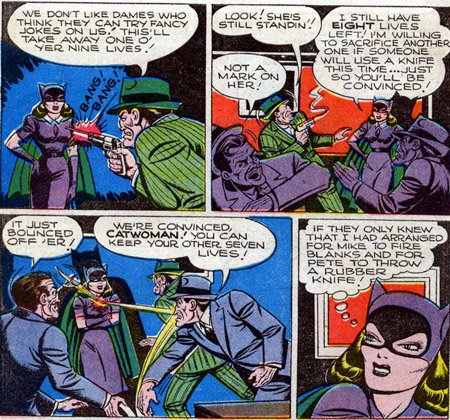 Convinced by the actions of Catwoman's two comperes, they all agree to help her hijack a cargo of industrial diamonds being shipped by dirigible (because this is Gotham, folks). But little did she know that Bruce Wayne had her old gang under surveillance the minute she broke out of jail, gleaning just enough clues to head the hijacking at the pass! 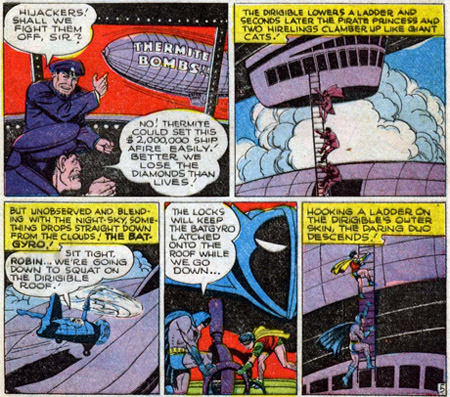 But can she keep up the pretense of having 9 lives fighting Batman at altitude?! 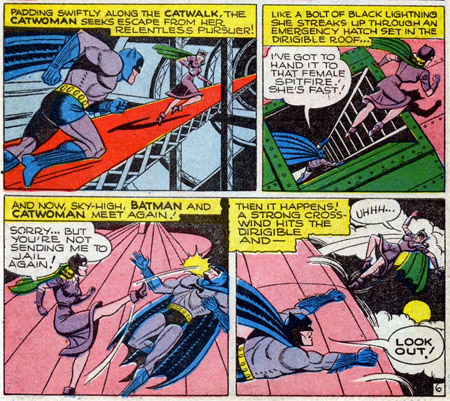 She sure can. Although looking at this musical montage (what, you don't hear it?), I'm not sure we should call it a "pretense". Narrator's not sure either. 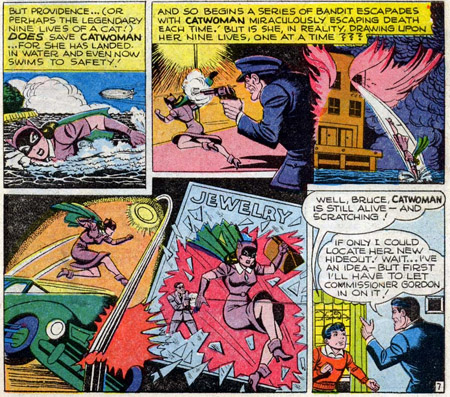 Later, as she attempts to steal from a millionaire weapons collector, Batman probably gives her the idea for her future trademark weapon.

Then things get... random. Catwoman escapes by TRACTOR. Uhm... 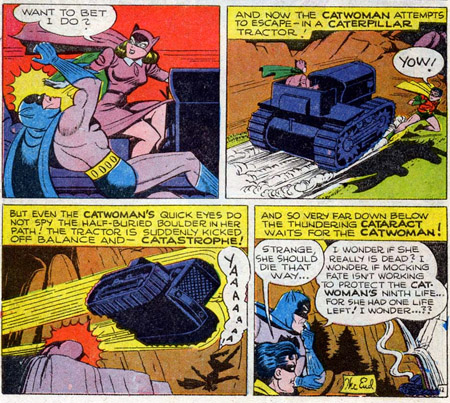 No way she's dead, she had one life left! And of course, yes, she would return in 8 months (Batman #39), and again a couple months later in Detective #122 (where she finally has black hair). So 9 lives?  We probably should inflate that number by a large factor.

While she's not technically today's Catwoman, there's little doubt she was the inspiration for the Batman '66 version, and that certainly had an impact on how she would be portrayed in the Silver Age, and even in later fare like Batman Returns (and to a point, the Animated Series). Hey, she's exactly as old, and dare I say iconic, as the Joker!

Who's Next? NOT Batman's wife.
Batman Comics Golden Age Who's This?