"Our life cycles are reversed!" 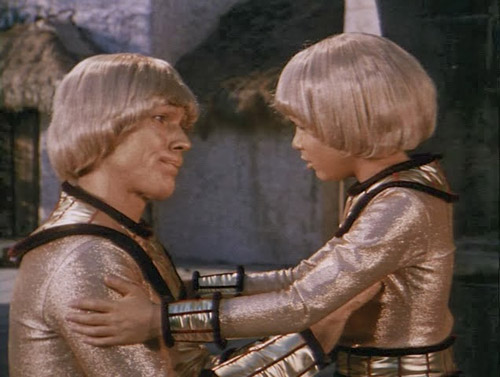 REVIEW: People like to remark on Twiki's new voice in Season 2 as one of the most grating things about it. But really, the worst of the worst is Jay Garner as Admiral Asimov. Not only is he ineffectual as a character, but Garner is either uncomfortable with the genre, or just not a very good television actor in general. I cannot stand his awkward over-acting. But they also don't give the character itself much of a chance to shine. In this one, he essentially rams the Searcher into an asteroid - maybe he shouldn't have shut the window blinds...

He almost gets crushed by debris but doesn't, because the Searcher went into the asteroid field to rescue a life pod that contains a Golden Boy who can make the debris lighter. His people have the power to change the properties of metals - a very broad power, mostly portrayed as living Philosopher's Stones - and while "Velis" can't lighten the Searcher so its thrusters can push out of the rock, another of his people, a Golden MAN, could. HIS life pod touched down on the nearby planet Iris 7, which turns out to be a penal colony dressed as a cod Medieval town. Villagers with pitchforks are chasing "Relcos" so he can turn their stuff into gold, or more usefully, so he can make a crashed spaceship they've acquired fly again so they can make their escape. Buck and friends to the rescue. You know how it goes. Hawk gets a bit of a role, dressing in robes and posing as a warden type until he's rumbled (much better than having him on the bridge where he might as well be Devlin or Haysbert - in fact, the cutaway to his hands on the controls wear a powder blue uniform, oops!). Eventually, Buck's team finds Relcos and they make their escape from the convicts, many of them represented by bad overdubs going ooo arrrr like B-movie pirates.

Back on the ship, sparks are flying in a way that seems dangerous for the actors, but the climax is essentially a guy in gold paint concentrating until the ship is loose. It's all very ordinary, and whatever points I might have given it evaporate with the "twist" ending (which we all guessed anyway). Velis seemed very smart and Relcos very dumb because for these aliens, PEOPLE ARE BORN OLD AND GROW YOUNG! Somehow, this is a trope that recurs every so often in television SF (there's an equally dumb Voyager episode that uses it as a premise). It doesn't make any biological sense, and in this case, it's not even required except to have a precocious kid telling an adult to concentrate and that adult cowering in corners. It's so freaking stupid. Cue the forced laughter, I'm outta here.

STAR GAZING: Anthony James (Graf) is back, but this time as a more standard villain (he was Varek in Plot to Kill a City). Little David Hollander (Velis the Golden Boy) had been in Airplane! as the Young Boy with Coffee, and after a strong career as a child actor, mostly worked behind the scenes as music supervisor on various things. Bob Elyea plays Alphie the young man who gets painted gold by his mom; he's been the voice of Twiki this season, but FINALLY our dark nightmare of the soul is over because this is the last time he'll voice the ambuquad.

ALL THIS HAS HAPPENED BEFORE: The jail cell was not only in Star Trek's All Our Yesterdays, but also in Battlestar Galactica's The Long Patrol (the village is even older -  it was used in Universal's Frankenstein). Gold-skinned aliens? Are we in an Irwin Allen show?

REWATCHABILITY: Medium-Low - Like one of those bad Lost in Space episodes.
Buck Rogers

Anonymous said…
Yeah, this seemed very TOS to me too, although the set reminded me more of Return of the Archons (or maybe it was just Hawk's robe). My favourite laughable moment was when they were trying to get the ship off the asteroid and everyone on the bridge is holding onto the nearest console like grim death ... except one extra who walks through the shot in the background, totally casual and not holding onto anything.