"Oh, Buck Rogers, does that mean that we will be together for always?" "Well, it does seem to be 'ordained,' doesn't it?" 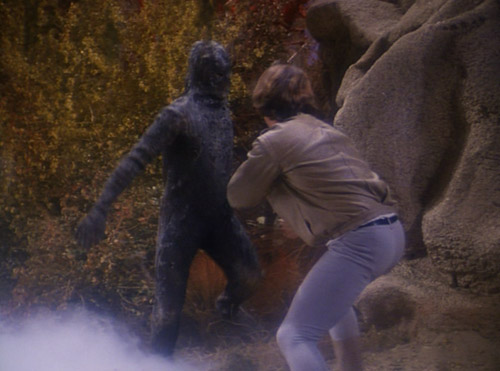 WHAT'S UP, BUCK?: Buck tangles with a mummy on a planet rich in fuel.

REVIEW: The Searcher ran out of fuel and now it's dead in space unless Buck and friends can find dilithium--I mean rubidium crystals on an actively volcanic planet, and quick. How did this happen?! Last episode, the were near Alpha Centauri, at a penal colony under Federation Law! It's gotten so ridiculous, I've stopped mentioning how off-track their mission's gotten. ALPHA FREAKING CENTAURI?! Way to search for the lost colonies of Earth! Well, in this one, they ran out of gas in the reaches (because Admiral Asimov is a terrible commander) and they will accidentally stumble on a human colony, which upon closer examination (i.e. Crichton digging through some files), was known to BE a human colony, just one that has been thought destroyed for 300 years. Looks like this mission would have been better undertaken by a librarian.

But while I think the audience is eventually ahead of the game, The Crystals manages to be fairly entertaining thanks to its mid-episode pivot. At first, this is clearly Buck Rogers vs. the Mummy. They find what looks like mummified remains in a bed of ashes and decide to bring it aboard their shuttle (they've changed the model and interior, so it's a bit better now) while they collect the gem-like crystals they need. The "mummy" soon animates and goes rampaging through the woods. They were really asking for trouble, as this sounds like a classic Curse of the Mummy set-up. The heroes give appropriate worried looks throughout, but never really address that their grave-robbing has caused this. Things get more complicated when Buck finds a young girl with no memory of who she is, eager to please him and taking everything he says as Truth. It soon becomes clear to us that the mummy is protecting the crystals because they are "seeds" from which people like "Laura" have grown (or as it turns out, a catalyst for their growth). The heroes eventually catch up, after a bit of a misunderstanding provided by usually-always-right Crichton. Buck rips the skin right off the mummy, it's Laura's mate, and society is ready to start again. Wilma's Laura impression is a good joke to go out on for once.

Yes, the trappings look fantastical (again), but the technobabble sound legit enough - this human colony couldn't risk pregnancy and childhood in this environment (which did destroy them, or render them dormant at least), so they genetically engineered themselves with encoded knowledge and rapid growth (hopefully, the Searcher left them enough crystals). Born of the rich ash, their life cycle starts with a Volcanic Swamp Thing protector/incubator form, molting to perfectly fine humans right out of tge Garden of Eden. It's a little crazy, but it works as an explanation.

I mentioned the new shuttle (introduced in the previous episode, but better seen here), but the Away Team uniforms look better than the sailor suits despite the Searcher logo looking like a big padlock. Are they retooling the show mid-season? Because Gil Gerard's lobbying for Mel Blanc to return as the voice of Twiki has paid off, even if the speech patterns aren't quite so obnoxious (win-win). With the "older" voice comes the notion that Crichton is Twiki's "son". The first episode of the season pointedly told us Goodfellow built him, but that doesn't mean Twiki's programming couldn't have been used as the basis for the smug computer (in a Data to Lal kind of way). It's not clear, but this is how the robots are treated going forward, even if the dynamic was not that at all in the first half of Season 2.

STAR GAZING: Amanda Wyss (Laura) was the first girl killed by Freddy Krueger in A Nightmare on Elm Street and was a recurring character in the Highlander TV series.

ALL THIS HAS HAPPENED BEFORE: The alien blood sample under the microscope is a reuse of a special effect graphic from The Andromeda Strain (which the show often poaches from).

REWATCHABILITY: Medium - Would have been better if the Searcher had been on a long-rang mission for weeks, but perfectly watchable out of context.