What a Card: Lt. Moreau

Being a look back at cards from the Star Trek CCG, and what I thought of them back when they were fresh and new... in EPISODE order. Hey, "Mirror, Mirror" wasn't just about Mirror Universe personnel. 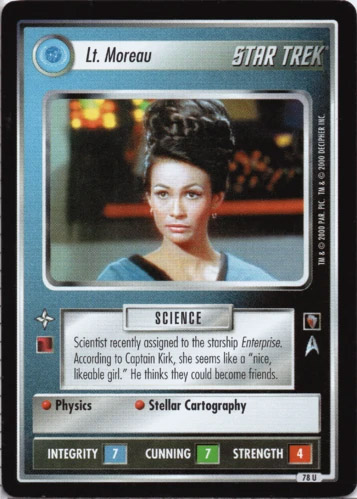 PICTURE: An attractive woman, though the bee-hive is perhaps a bit passé ;-). Actually, that hairdo does cause a problem seeing as her eyes are forced to settle for lower than the mid-point of the image. Any good photographer or cameraman will tell you eyes need to be at the ¾ mark. While I thought she was standing exactly where Lt. Sisko was while talking to Kirk, it's not the same background exactly. I guess they fudged Sisko's position in "Tribble-ations". So a basically pleasant 3.3.

LORE: "Friends" eh? Kirk, you dawg! It's straight from the episode, as is the short quote, but I'm really glad they used it. Don't know how much I appreciate "recently assigned" though. A card game is so non-temporal with those things. But hey, the dramatic irony of the rest of the card is worth a 4.

TREK SENSE: She's a scientist, so Science. A Lieutenant, so the Staff icon. She needs some scientific skills, so how about Physics and Stellar Cartography. They're not unrelated, certainly. The specifics are inventions, but not unbelievable ones. Face it, we knew much more about her Mirror universe opposite. And looking at THAT card, we also see Physics, but Biology as its companion. So there are discrepancies, but there of course had to be. Attributes are pretty much what you'd expect for a 23rd-Century female officer in her field. No problems, but no flash either. A respectable 3.5.

STOCKABILITY: Running strictly non-Mirror OS decks? Moreau can be a source of Physics (only Sulu and the non-AU Ensign O'Brien also have it) and the more useful Stellar Cartography (along with Bailey and Watley). Of course, you can use her in any Fed deck by virtue of her being a support personnel, reportable to you ship (even downloadable) through Assign Support Personnel. There are more than half a dozen such personnel that feature Stellar Cartography unfortunately, but very few with Physics. Granted, it's not as useful a skill, but newer cards give it some help. Moreau is probably easier to use than Albert Einstein, see. I didn't mention SCIENCE, but it's clear it's a good classification. No real flaws in the attributes, though they read like a universal's (as does the skill pool) except she can't be boosted with Lower Decks. You might also report her easily only to have her be victim of a Transporter Mixup to bring in her much more useful opposite, Marlena Moreau. Those small niches she carves out for herself get her to 3.3.