Who's This? A traveler inside earth. 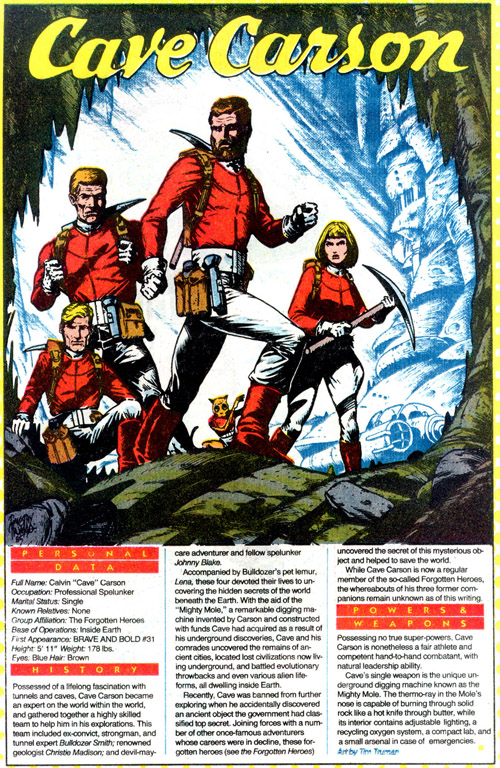 The facts: The spelunking adventurer known as Cave Carson premiered in a trio of The Brave and the Bold issues, #31-33 in late 1960, with a return engagement for #40-41 and in Showcase #48-49 and 52. Carson, his team, and his "Mighty Mole" vehicle didn't have as much success as similar adventure groups like the Challengers of the Unknown, the Sea Devils or Rip Hunter's crew, and would bide his time until he was reintroduced to readers as a member of the Forgotten Heroes in the 1980s. Post-Crisis, he shows up in Time Masters, Eclipso, Wonder Woman, and much later, in JSA. Basically, someone needs to go down into the "Center of the Earth" and a writer has to remember he exists.
How you could have heard of him: DC's Young Animal imprint brought Carson back in a series first called Cave Carson Has A Cybernetic Eye and then Cave Carson Has An Interstellar Eye, a weird strip in the style of DC's pre-Vertigo UK invasion titles.
Example story: The Brave and the Bold #31 (August-September 1960) "The Secret Beneath the Earth" by Ed Herron and Bruno Premiani 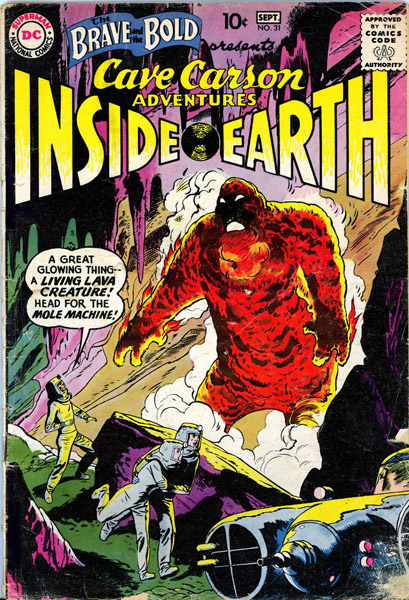 Going back to the very beginning, Cave's first story is typical not only of his "Adventures Inside Earth", but of all the aforementioned science heroes' save for the setting. Cave is apparently already down there somewhere, as he's sent a message in a bottle, attached to a balloon, from out an extinct volcano for his team (Bulldozer and Christie) to catch. 48 hours earlier, or a panel later as the flashback flies, a radio tower had been sucked into a sudden sinkhole. Thankfully, the action science trio was in town and were immediately called in, but not before... 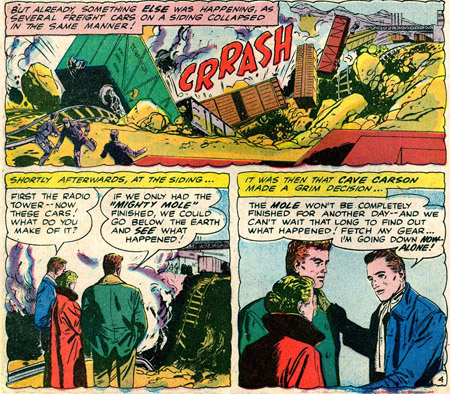 Yes, shockingly for modern eyes, Cave Carson doesn't have a beard yet! Nor is the Mighty Mole ready, but that's just a day away. Somebody decided to attack the surface world just in time. Cave decides to spelunk down the volcano the old-fashioned way. A day later, cue the balloon. But by then, the Mole is all gassed up and his partners are able to dig down towards him using SCIENCE! 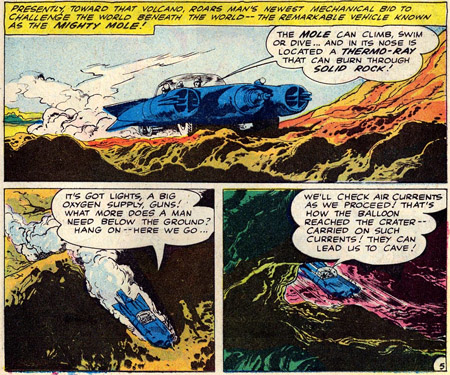 Jules Verne couldn't have done any better. Careful not to melt right through Carson, they find him pinned under the wreckage of that sunk train. The freight cars suddenly start flying around and Cave explains - and here is how this is exactly like all those other Silver Age strips - the cause is a magnetic monster. Yes, whether underwater, or on another planet, or lost in time, there has to be some kind of weird monster at the heart of the story. It's what the kids want, dammit! And whatever creature is causing the sinkholes, it's now caused a volcanic eruption that forces the Mole crew to escape the molten flow to... a subterranean sea! And from there, a whole inner Earth universe (probably not Skartaris) with even more monsters.

Out of the clutches of a giant weed and into those of a sea dragon, we reach the end of Chapter One, submit to an interlude about real-world spelunking (yeah, let's encourage kids to go down local holes), and rejoin our heroes in dire straights. Cave and Bulldozer - reasonably dressed in pressure suits - are about to get eaten when Christie comes to the rescue, using the laser drill on the beast! 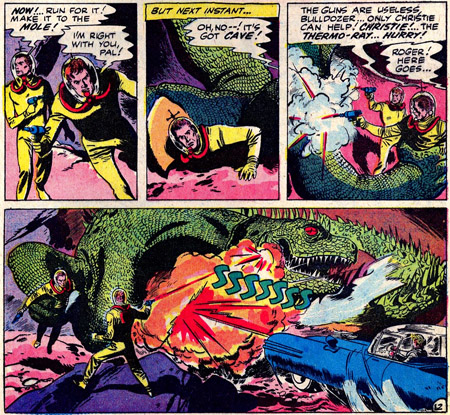 Don't tell PETA (it's fine, it swims away). It's getting hot, so they don their asbestos suits (gulp!) and come across a giant made of lava, as per the cover. Caught between a molten rock and a deadly sea monster, the Mole heads into the weird jungle, which is set on fire by the lava monster. Think of the lost ecosystem! 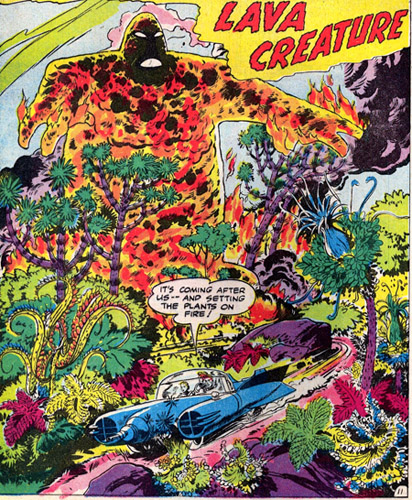 It follows them to another cave system where the laser drill slices off some stalactites in the hopes of trapping the monster. They melt, you silly scientists! Soon, the Mole is the monster's hands, its crew trapped in a Jiffy Pop pan. But a strange cry is heard - it's the still unseen magnetic monster! It causes a cave-in that finally stops Lava Boy and draws the Mole away. Cave and crew are deposited in a large cavern, safe and clear. But what IS this monster? Is it something alive? Carson explains that it's "as alive as electricity, air currents, steam or magnetism". So, uhm, no. Here's more of that science, explained: 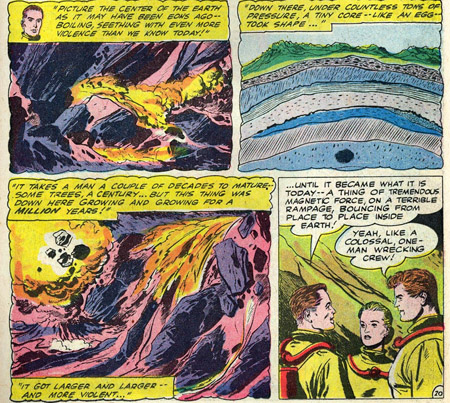 A magnetic egg, something like an inner Earth black hole... Scientists would want to study it. ACTION scientists want to DESTROY it. Again, Carson breaks out the balloons, and follows the air currents to the egg on foot. Cave and Christie slip and fall down a crevice, with Bulldozer left alone to pull them out as the "creature" approaches. 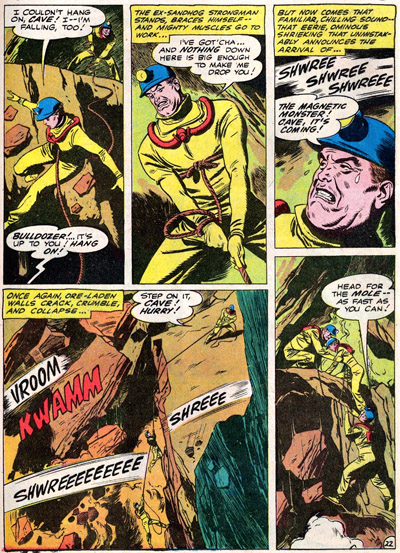 Maybe the comic ISN'T encouraging kids to go spelunking after all. They jump over fissures and reach the Mole, which they use to bore right through the magnetic monster. It may have been described as a force and an egg, it actually looks more like a robot (that's so the heroes don't kill anything). 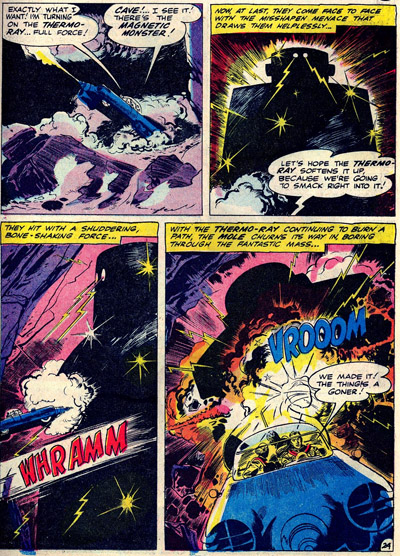 The trio is very happy to see the sky again, seeing as the underground is just a danger a minute, but have they come back with DATA? Not really. Well, there'll be other adventures, other chances to accumulate knowledge. Cave Carson will become wiser over time, therefore grow a beard. But for now, his follicles will have to wait.

Who's Next? A woman both hot and cold.
Comics Silver Age Who's This?