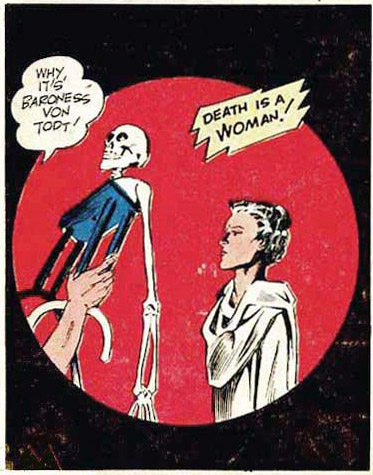 That's QUITE the Scooby-Doo reveal, in a story where Spy Smasher seems to be taken to Hell itself to be tortured. But as to the question, "Is Death a woman?", I confess I've never really thought about it. Sandman comics of course portrayed her as a woman, but the image of the Grim Reaper, well... Skeletons, though they can be identified as male/female if you know what to look for, are pretty androgynous. In death, we all become the same, the great leveler.

I'd even say it's strange that I didn't see Death as female given that in French, la Mort is a feminine word, so any anthropomorphic turn of phrase would have used feminized grammar. I guess then skeleton bones really do wash away the notion of gender.
Comics Golden Age One Panel

It means "dead" according to my translation software. They should have known!
February 1, 2022 at 7:00 AM