Category: RPGs
Last article published: 16 January 2022
This is the 561st post under this label 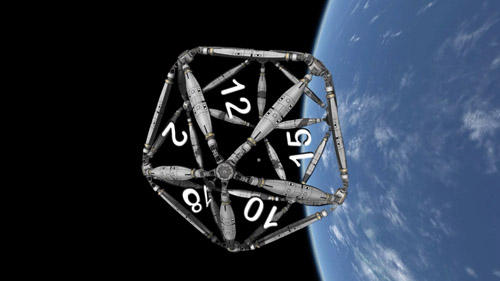 Starting a space opera role-playing game is daunting. Saying there's a whole universe to explore is over-stating it because you don't have infinite time to play in an infinite setting, but even focusing on only part of a galaxy (a quadrant, or even a single system) can seem pretty infinite compared to other types of games where you might explore a continent, or a single city. It's definitely scalable, but it all depends on your choices.

Where CAN you go?
There are really two limiting factors in space opera. The first is the characters' autonomy. Can they do anything they like and chart their own course, or is that course predicated on missions handed from on high? The latter is much easier. If the characters are part of Starfleet (or Earth Force, or some intelligence service), a higher-ranking officer will give them the scenario hook and off they go. The GM will have prepared the world, the aliens, the tech, and the plot for that specific mission. If the characters are self-employed (like the veteran adventurers you make in Traveller, for example), they could decide to point their ship in any direction. The GM can certainly adapt SOME stories to another environment or even political structure, but may feel safer NOT giving the PCs their own ship. That way, he can give them shipboard adventures (Murder on the Nile... in space!), while he prepares the next pitstop planetary adventure. In other words, it's easier to run the Rebels than Han Solo.

Well... I suppose you could give them their own ship, but if travel distances are slow, you could still buy time by throwing space anomalies and space pirates at them en route. See, the second factor is technology. How are ships getting around? Long semi-realistic voyages, or blink-of-an-eye hyperspace? Or are there jump points which direct traffic to well-planned locations? It's not just about speed either. Do sensors tell you everything well in advance? Are their complete astrogation charts or can the GM plop almost any planet anywhere? Does FTL radio keep information flowing? Decisions you make about available technology will expand or shrink your setting. 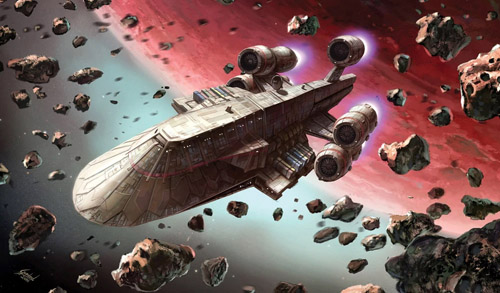 What's IN this setting?
Whether you're creating a universe from scratch, or choosing a pre-fab setting, there are several questions you have to answer. For example, what is humanity's place in this universe in comparison and contrast to other species? In Star Trek, there are many alien races and the most important ones have largely monolithic cultures, sometimes even Empires (of a kind) to oppose or ally with humanity. In Star Wars, the aliens are more alien-looking, but the Empire seems to have homogenized the culture by displacing individuals all over; humanity just seems to be the most common. In the Foundation novels, there are no aliens at all, and you wouldn't expect them in a low-scale, near future Solar System-based opera either. In the Aliens/Predator universe, alien life almost always seems to be deadly and humans are food or trophies.

What about robots? Mechanical life is a science-fiction trope, but need not be a space opera staple. Except it often is. Trek has (very few) sentient androids. Star Wars has droids who appear to be a semi-sentient slave race. In Battlestar Galactica, there's been an uprising of the machines and they want to destroy humanity. This also seems to have happened in Asimov's Foundation continuity and A.I. are banned. In any case, are they alien minds, devoid of consciences? Are they ruled by the Three Laws? Or are they de facto "humans" with special abilities? And if you do decide to include robots, can they be PCs? And if mechanical beings exist, what about cyborgs? How much cyberpunk do you want in your setting?

There are obviously other tech concerns besides 'bots and ship engines. How magical is the technology in your part of the universe? Transmat beams, replicators and holodecks? The more you goose up your tech, the more difficult it will be to create a threat for the PCs (as countless TV writers have found). The real question is, do you want an economy in your game, or is scarcity a thing of the past? If there is no scarcity, PCs can get their hands on any equipment (within legal reason) and villains can't have greed as a motivation (again, there are ways around this, but generally). And what about weapons? In Star Wars, a combat-heavy setting, blasters act like guns and light sabers like katana. Fighter craft have dog fights as if they were planes. This is pure space opera and other franchises have generally gone that route too. But if you're looking for realism, perhaps we never gave up on projectile weapons, and normal swords are great at puncturing space suits (as in Traveller). What's medicine like? Entertainment? Computer interfaces? All of this needs some thought. 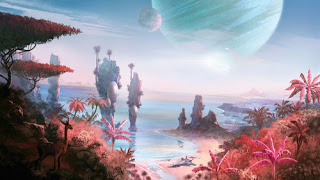 Another world-building cheat used by Star Wars is to give planets a single eco-system. We know that's not realistic, but it makes each one easy to remember, presents its own specific challenges, and in a world that essentially uses swords, guns and planes (by any other name), it's the equivalent of the old matinée idol globe-trotting to dark jungles, arid deserts and snowy mountains. In Star Trek, it's much the same but the focus is more on mono-cultures. So planets that work like gangster empires, roman provinces or some Orwellian "ideal". A more realistic approach would make planets more varied geophysically and socially, but then, are you really going to visit the whole thing? If your game is set on a single planet for any length of time, it's just a sci-fi game, and may not be space opera. In space opera, that one outpost might as well represent the whole planet, so who cares what the polar region is like?

One science-fiction element we haven't mentioned is ESPers. Are psionics available to PCs or others? Star Wars has its Jedi and Sith. Trek has telepathic aliens like Vulcans and Betazoids. What role do they have in society? Are they clearly marked as such? Enslaved? Banned and hunted down? Just normal? Does it depend on the planet/region of space?

Because the last question is: What's the general political structure of your setting? Are there giant powers jostling for power/peace, all of which interact with one another and which the GM must keep in mind? Is there a monolithic Empire that must be fought against (or for), with rebels/terrorists striking necessarily from within? Is the universe more mercantile than political, with loose alliances of planets trading with others for what they need (games like Traveller and GURPS Space are sort of like this)? Is every world so isolated no real structure is possible (say in a low-tech game where relativity makes dates meaningless and/or people spend long trips in suspended animation)?

Ultimately...
...your choices will depend on what you want to do in your game. Is it military like 2300 A.D.? A space western/chambara like Star Wars? Exploration missions and moral puzzles like Trek? Are the characters free-wheeling rogues or enlisted officers in some kind of space corps? Do they live on a station where the action comes to them, or based on a ship, seeking it out (or, as in BSG, running from it)? Very often, the question boils down to what genre is actually under the surface. World War, Cold War, Espionage, Samurai, Western, Anime, Horror, Pulp, Cops & Robbers, even Sword & Sorcery can be given a space opera "skin".

I've just gone through this process myself, starting a space opera game powered by GURPS. Oh, and added another question for myself: What soundtrack should this campaign have? Having already surprised myself by making a lot of Star Warsy choices (i.e. the franchise I don't really talk about), I also did NOT go with a big symphonic score. Having grown up on such "classics" as Space 1999 and Buck Rogers, I instead opted for space disco. I think it works with the roguish, sexy, but also goofy PCs that inhabit the campaign, and sometimes, you just make a choice for the sake of surprise. I hope it - and my other choices - work out!
Advice RPGs