In theaters: If I am somewhat positive about The 355, it's undoubtedly because it was prefaced by one of the worst (and pointlessly long) trailers of the year. So the fact that no, in fact, the trailer didn't tell me everything is a minor miracle. It also doesn't feel like the trailer, generally more grounded and somber than the Mission Impossible meets Charlie's Angels hybrid we were promised. That said, it never escapes the clichés of the genre, but rather runs right into them. And while it's easier to accept genre tropes in a genre movie (MacGuffins, unsurprising betrayals, etc.), I'm less forgiving of cliched dialog, and there's a LOT of that here. You almost want to do call and response at the screen like you're at a Rocky Horror Picture Show screening. Competent action scenes in interesting spaces, and good actresses (Penélope Cruz perhaps the most engaging as a so-called "normal person"), but will I remember anything from this in a few months? It's the same old thing, except starring women. I'm all for that, but if you want to make it fresh and new, it needs to be about more than the casting, y'know? By all means, let's have more women-led action flicks, but let's also make it worth their while.

At home: It shouldn't work, but Ricky Gervais' comedy about grief, After Life, is a powerful (and most importantly, truthful) piece on the subject. Over three seasons, I had a couple of real, extended belly laughs, but it's the heaving sobs I'll remember most. Maybe you don't want that feeling when you're watching a sitcom, I get it, and some viewers may even find it repetitive and want Tony to snap out of it, but it feels very real that he doesn't, and that his progress dealing with his wife's death is so incremental. There's an element of self-loathing I have found in grief that rings very true here and motivates Tony's misbehavior, but the way out is through random acts of kindness for him, which I found deeply touching. It's also hard not to fall in love with his marriage's bubbly chemistry, revealed through home video footage. The third season lost a couple of positive lights in Tony's life, and I missed them, especially since Gervais kind of lost focus by concentrating on some of his trademark cringy characters instead. Still, he didn't lose Penelope Wilton who is, for me, one of the most touching performers in the universe, so it's all good. And if early episodes of Season 3 disappointed, the last couple really brought it home, ending the series on a beautiful lyrical note. Dark, yes, but in the dark there's hope.

I'm not a big stand-up person, but sometimes I want to catch up with what's being done in the medium. Netflix dropped a new season of The Standups the other day and I wound up watching all three (for some reason, Netflix stream them in reverse order). So in all, 18 half-hour comedy specials, which I think is the optimal length to get the best a comic has to offer. 1 hour plus, I always feel there's padding. 7-minute spots, we don't have time to invest in the person's worldview. I probably laughed at some point in each act, some more than others. I was most impressed with the female comics because they bring a worldview that feels newer and fresher, whereas the topics and angles men tend to take, well, I know where the jokes are going a lot of the time. Just to show you how disconnected I am, only 2 out of 18 comics were at all familiar to me; they were probably on Comedians in Cars. What have I learned about myself? That what most resonates with me is stories told in a funny way. I'm a bit of a raconteur too, I suppose, but where I find the most giggles is when there's a story to it. Much more satisfying than a bunch of bits strung together. And what does this mean for future me? Have I been satiated and won't watch another stand-up show this year, or has it opened the vanes? I guess we'll find out.

Books: When you sit down with a Gary Russell-penned Doctor Who adventure, you know there's gonna be a lot of fanwank. Within the first 25 pages of Placebo Effect, you've already got Wirrn, Foamasi, the Daleks' Master Plan time frame, and two companions from the comic strips getting married. Reading while your eyes have rolled all the way back inside your head is, shall we say, a challenge. Because it doesn't stop there. I suppose to this is a love letter to the comics strips because we soon get Kleptons and Meeps and tons of others, much of it pointless in story terms. And Russell insists on spelling Wirrrn with three r's because that's how the Target adaptation of The Ark in Space did it. It's the kind of nerdy attention to detail that could drive me mad, but a good story could make me forgive it. Alas. This unfunny lark features a cast of dozens and had me asking "who is this again?", a feeling not helped by the fact that half the cast is either being impersonated by Foamasi or possessed by Wirr(r)n. At the same time, we get several descriptions of the Doctor and Sam through the eyes of various NPCS... To reference a fictional Prime Minister: Yes, we know who they are. And then, the Doctor seems to jump around from location to location, appearing in this office or that without connective tissue. It just felt very messy and disjointed, and a waste of its far future Olympics setting. 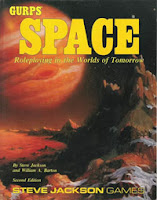 Role-playing: Played our first session of GURPS Space (it stirred up an article that will show up here tomorrow) and because the book is really a tool kit to create whatever space opera you want, I spent the last two weeks making choices. In a way, I surprised myself by going very Star Wars on this (the so-called "Franchise I never talk about"), but my guys are maverick frontier types and a gung-ho, low-tech but high-adventure approach seemed natural. I also didn't want any magic tech that led to a scarcity-free utopia, so transporters, replicators, etc. This universe spent all its chits on hyperdrive, but the rest is pretty mechanical. I suppose the biggest choice I made was with the soundtrack. Avoiding the orchestral music we're so used to nowadays, I went back to my youth when all the space shows had a disco sound. I'm glad my players responded well to it! And the session went well, our heroes catching up with this new setting, and largely using their time to do character development. Yes, there's a plot involving an attack by hacked robots, but the suspense mostly came from an impending marriage proposal, and as to whether or not the awkward brother would come back before Ace and his girl could get frisky. The brothers doing a comedy double act throughout, they were still teased another part of the puzzle as their orphaned colleague's mother shows up out of the blue with secrets she's as yet unable to tell. Traveling the galaxy is fun and all, but I've always felt Paradise (the station/town the characters live in) was the core of the setting. It was great to be able to re-explore it and its recurring NPCs.
Doctor Who Geekly roundup Play RPGs