What a Card: Lt. Palmer

Being a look back at cards from the Star Trek CCG, and what I thought of them back when they were fresh and new... in EPISODE order. They made one card from The Doomsday Machine, and they made it late in the game... 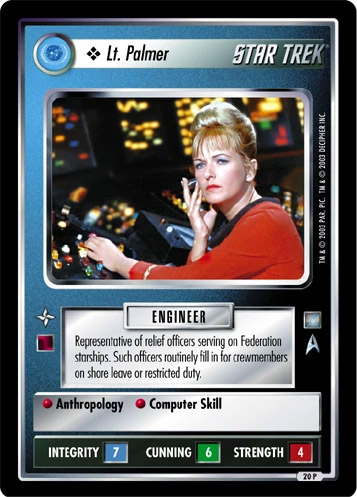 PICTURE: The telephone operator console looks huge and complicated (no button functions are identified), but that's not a flaw at all. I rather like all the colors and fluid motion this bright card provides. A shiny 3.4.

LORE: Very, very universal throughout, with nothing about Palmer specifically. In fact, it seems to espouse 2E design philosophy in that sense. (Note that there is another Lt. Palmer in Star Trek, a role played by astronaut Mae Jamison  in TNG's "Second Chances" - apparently no relation.) A very basic effort worth its 3.

TREK SENSE: There's a discrepancy between Uhura and her relief pitcher Palmer in that they have different classifications. Red uniforms in TOS are for services, i.e. security and engineering, so why isn't Uhura an Engineer? Well, the distinction must be that Uhura is regular bridge crew (she has the Engineer too), while Palmer hasn't achieved that post yet. In any case, isn't the issue with Uhura and not Palmer? The skills are well chosen too (as is the support personnel designation and staffing icon), with Computer Skill being the usual stand-in for communications, and Anthropology no doubt useful for linguistics. Integrity is Federation-standard, Cunning stays low because of her low posting, and Strength that of a Starfleet "basically-untrained" female. No surprises, but no mistakes, and that's a 4.

STOCKABILITY: One of the more dubious "broken links" fixed by All Good Things, Lt. Palmer exists to give the Starship Constitution another universal OS personnel to download (the word "any" implies it). While absolutely nothing prevents the ship from downloading a Mirror universal, it was felt that an Alpha Quadrant native was still required. Well, OS or not, as a support personnel, she can be reported/downloaded to any ship in any quadrant. She thus joins an already large group of support personnel with Computer Skill. And though Anthropology is rarer, there really are no rare skills in the Federation. She's a good back-up for Homeward (all requirements), except that it's worth hardly any points. DQ decks might like her mix of ENGINEER and Computer Skill because of all the missions that require it there, but again, nothing rare about that. More skills CAN be piled on with OS Equipment, so she might be more at ease in OS decks, where she indeed CAN be downloaded by a ship, and mix well with a crew, and likely be the only universal source of both skills AND classification. In-theme, she's good. Otherwise, not so much. Enough for a general 3.3.