What a Card: Transporter Chief Kyle

Being a look back at cards from the Star Trek CCG, and what I thought of them back when they were fresh and new... in EPISODE order. Our last original cast Mirror personnel: 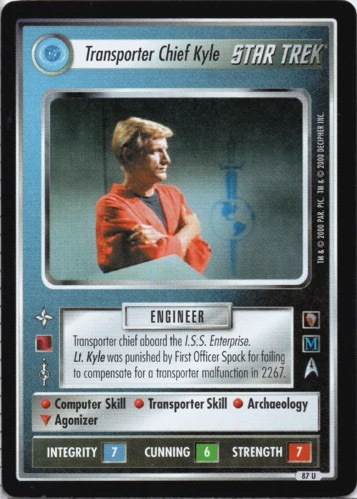 PICTURE: Since the two Mr. Kyles were dressed the same (none of that evil dress sense), they wisely pulled something with the Terran Empire logo in the background. The pose is also mean enough (as far as Mr. Kyle goes anyway). CG note: They removed First Officer Spock from the image. Points off for being much out of focus... and we're at an even 3.

LORE: He hasn't got much of a story, but the one here makes me wonder what OUR Mr. Kyle got as a reprimand for obviously not compensating either on his end. Knowing Spock, a cutting comment about illogical humanity. Did we really need the date? I really dislike those dry dates, though I admit it's how I remember in which century the stories take place in. A 2.9.

TREK SENSE: The Mirror Kyle wasn't much different from the normal Lt. Kyle, and so they necessarily share a number of things. Being transporter jockeys, they are both Engineers with Transporter Skill. They both have a Staff icon befitting their position, and despite the moral inversion between universes, they both have the same Integrity. That's not impossible given onscreen evidence - he was loyal in both worlds. The other attributes get nudged one way or the other, but to good effect. His mentioned mistake drops him a point in Cunning, and the more violent nature of his environment adds a point in Strength. As for the change in skills, where Lt. Kyle's Navigation and Anthropology stem from the details given in his lore, this Kyle tries to follow his one episode more closely. Working the console and having the (unused) capacity to make compensations would indicate Computer Skill. Like Navigation, it's one of the most common skills, so they mirror each other somewhat. The same can be said of Archaeology and Anthropology, as they are closely related. How the former figures into the Mirror Kyle, I'm not sure. There's no evidence of it. The download is a fair one, since his was the first Agonizer seen. He wears it at his belt (like a good soldier), even if it's there to punish him at the first mistake. One unproven skill, but the rest stands up well. How about a 3.4?

STOCKABILITY: The Terran Empire is a good faction to play with, and Transporter Chief Kyle is a good source of Transporter Skill as far as the OS group goes (not as good as Chief Engineer Scott or the ultra-rare First Officer Spock, but still). The modern Terrans only have Smiley anyway. Kyle is a good backup for the skill at the very least, and it's one that can be used at Mine Dilithium, the mission that is home to the Terran's Time Location, the Halkan Council. Not only that, but with a Romulan Cloaking Device, he can Scan Cycle Check. His other skills aren't bad either, with Computer Skill always important, and Archaeology allowing him to access The Guardian of Forever and its card draws (though he needs to get to the right quadrant first). Very good attributes, especially the INTEGRITY (for Terrans anyway), but he can boost them further, simply by downloading an Agonizer. He gets right up to 8-7-7 (boosting others around him as well). Other equipment downloads from fellow Terrans will further boost his attributes and skills. Not the best at anything, but a solid companion to your cards. A 3.5.