Who's the Original Cheetah?

Who's This? DC's Squirrel Girl (not really). 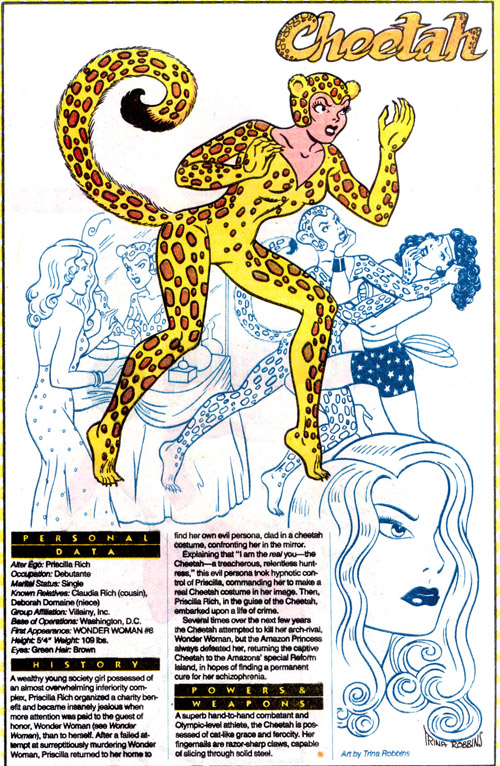 The facts: Priscilla Rich (sounds like a Disney villain) is a debutante whose evil split personality is activated after Wonder Woman eclipses her at a charity event. Her mirror (again, very Disney) tells her to become the Cheetah. She would become one of the Amazon Princess' most ardent foes, appearing many times until her death in Wonder Woman #274 in 1980. Somehow, one of the Crises undoes her death so that the new (third) Cheetah, Barbara Minerva, can kill her all over again in Flash #219 in 2005.
How you could have heard of her: While more prominent than the second Cheetah (see you next week), she's been eclipsed pretty much for good by the Minerva version. In fact, in the New52, "Priscilla Rich" is merely an alias of Minerva's. Where people will remember her from is the Challenge of the Super-Friends cartoon, where she was a member of the Legion of Doom.
Example story: Sensation Comics #22 (October 1943) "The Secret Submarine" by William Moulton Marston and Harry G. Peter 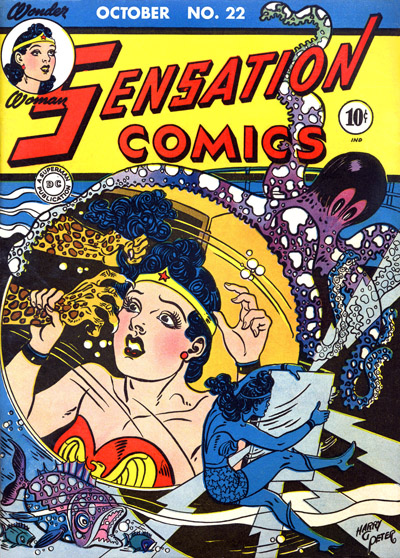 Cheetah's second appearance (I like to skip the origins) is triggered when, once again, Wonder Woman is put in the limelight as a submarine gets christened after her. The sub, which can shoot electric beams to sink enemy ships, is soon stolen from the naval base. And here I thought cats didn't like water. What they do like is leaving scratch marks all over the guards' backs (ooh la la!). At the end of the previous adventure, Diana had freed Priscilla Rich so she could make restitution to her victims, on the promise she would then commit herself to Amazon Island for treatment. It wasn't her fault, Wonder Woman opines, she's just mentally ill! Fair enough, but the Cheetah personality seems to have returned before any of that could happen. Diana gives Priscilla a call and she's home... but then who is the Cheetah jumping Steve?! 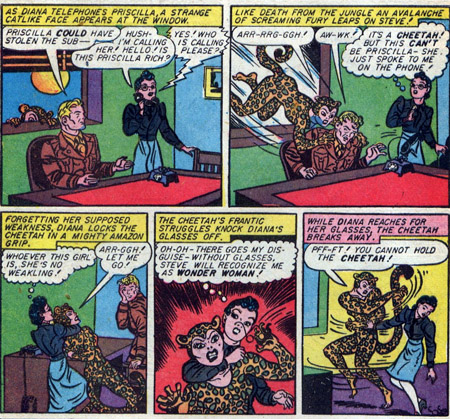 An armlock is pretty mild bondage for this strip, but just you wait. If Diana didn't have to protect her secret identity, she would have easily wrestled this faux-Cheetah to the ground. Alas. Diana Prince jumps into her Amazon girdle and races after the tricksy feline, who jumps in a car and leads her on a merry chase... right to Priscilla Rich's mansion! 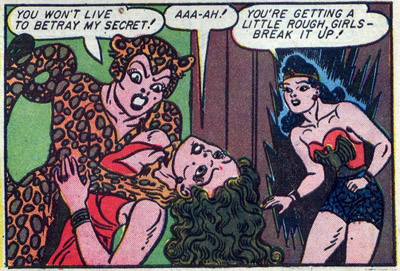 Cheetah escapes again and Diana administers a bit of first aid, learning that the villain here is a former henchwoman Sandra - slave, really - who stole the sub to frame Priscilla as revenge. Might make a buck on the side by selling it to enemy agents. Diana leaves to take care of it, but then, GASP! 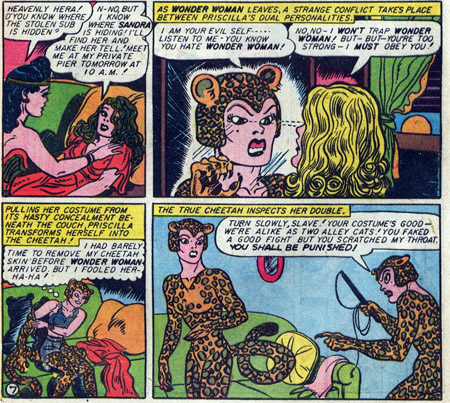 The REAL Cheetah is pulling the strings. And whipping the girls into a frenzy. Oh Mr. Marston! Then it's back to the zebra outfit for slave girl Sandra and all the slaves shuttled to Priscilla's yacht where she told Wonder Woman to meet her. The boat takes the Amazon and Etta Candy to a buoy where Priscilla "believes" the sub is anchored. And indeed it is. It takes in Etta and Priscilla, and zaps Wonder Woman with its electric weapon before pulling her in too. OBLIGATORY BONDAGE! 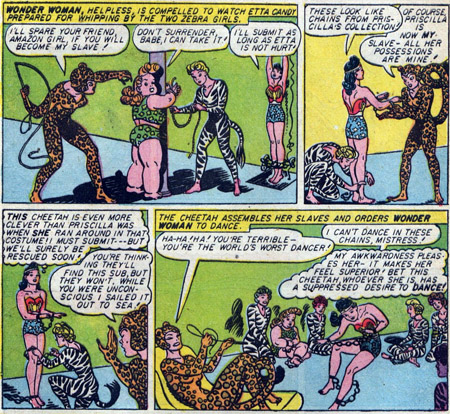 Dance, Wonder Woman, dance! No, you're terrible, let me show you how it's done. 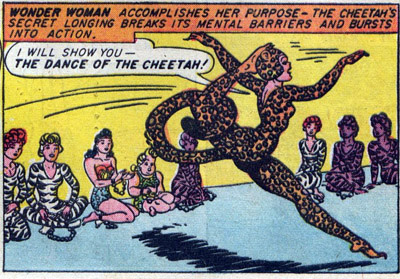 Those ballet classes really paid off. Wonder Woman compliments her as do all her sycophants which tames the beast and releases the Priscilla personality. She runs out of the room before unmasking, changes into more reasonable clothes and tries to drive the sub back to harbor... neglecting to unchain all the girls in the hold. And well, the life of a debutante didn't exactly prepare her for piloting a submarine single-handed. Etta takes a tumble, Diana springs into action, finds Priscilla knocked out in the control room with no clue as to "where the Cheetah is", and Wonder Woman has to lift the submarine out of the muck and bring it back to shore. 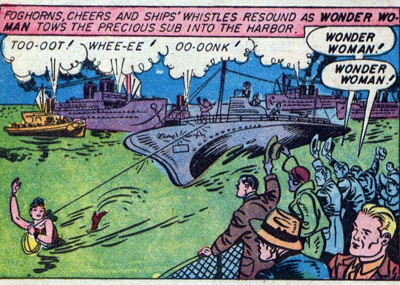 They think the Cheetah's... drowned? But no, cut to an epilogue that reveals Diana used the magic lasso on Priscilla and she confessed she was still the Cheetah. (Might have been more logical to have Sandra say so, no?) Anyway, Wonder Woman realized it WAS Priscilla, which is why she tricked her into dancing. And it's back to Reform Island for her.

I bet it offers better treatment than Arkham Asylum. More humane anyway. As to whether it's more efficacious, I don't know. Cheetah does show her claws again.

Who's Next? Her ferocious replacement.
Comics Golden Age Who's This? Wonder Woman

Martin Gray said…
Terrific stuff, I did like Priscilla, she was so delightfully warped.

That submarine panel is great, you can’t beat Golden Age Diana, taking joy in her work.