Doctor Who RPG: Our Lockdown Year

Category: Sarah Jane Adventures
Last article published: 15 March 2022
This is the 73rd post under this label

Things got complicated for our imaginary RPG club, but it's time to address the Lockdown Year re-imagined as a role-playing game campaign using Cubicle 7's Doctor Who RPG. (Go back one, to Series 12.) 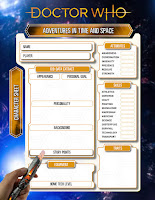 The Thing Is...
With the pandemic came a lockdown, which put the kybosh on the club's activities. The group GMed by Chris just got one full game in before the gaming space had to be boarded up, and he took the year to write his scenarios. But like many of us, club members sought community and found it on platforms like Zoom. GameMasters like Russell and Steven came back to do quick scenes or sometimes entire scenarios, often inspired by the isolation they were feeling, and brought a lot of the older players back. Some of these were just calls between the GM and player, the latter given a premise and allowed to run with it. Seeing as they were played online, the games were streamed and the small pick-up scenes were archived as videos the rest of the club could look at.

Revolution of the Daleks. The one normal session prepared by Chris was still a big one. With Jodie's Doctor in a space prison, the action was at first divided between two groups. Special guest John was to come back as Captain Jack to rescue the Doc and return her to Earth, while the companions - Yaz, Ryan and Graham (Mandip, Tosin and Bradley) - discovered their old corporate foil Robertson was manufacturing Dalek "drones". Drone manufacture is of course co-opted by a real Dalek resurrecting his race with human DNA. Jodie's solution - to call actual Daleks so they can exterminate these mutants - seemed insane, but using the extra TARDIS on hand since the end of the previous season's game, she manages to do away with the extermination squad too. It's the kind of brilliance that can happen in DWAITAS when you give players free reign and don't overwrite a scenario. This was also meant to be Tosin and Graham's last game (their character sheets coming soon), and they used the Doctor's prolonged prison stay to motivate their departure, leaving only Jodie and Mandip to carry on. The search for other players is part of why the club's main game took so long a break during the early pandemic. 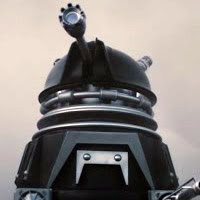 A Message from the Doctor. Jodie, playing the current Doctor, was first to send a message to the club, in character, not only offering support, but the permission to use the club's resources to play online or just have group chats to talk about the old days, how things are going, etc. Junior club member Emily took the reigns after that, organizing such meets and providing tech support to the gang.

The Raggedy Doctor/Rory's Story. Early experiments included older players taping calls with GM Steven where they were asked to retell their story from a new perspective, or tell the club where their characters were now.

Farewell, Sarah Jane. The club's Sarah Jane Adventures campaign having collapsed since its principal player's untimely death, GM Russell decided to put a real button on it as a tribute to the much-loved Lis. He designed a crazy adventure surrounding the character's funeral, with many players from the original campaign returning as well as a number of guest-stars who knew Lis and wanted to be on it (like Katy and Sophie, but Russell played several other companions as NPCs). Not a dry house on the screen.

NPCs get their due. Various GMs produced little player-less videos to give context to old scenarios, showing what happened before or after. They revealed these during group chats that were just meant to be catching-up sessions. One of Van Statten's technicians inspects the Doctor's scarf before the Metaltron arrives. Madame de Pompadour's mind trapped in the clockwork ship. The Osgoods and the Pompeii family's descendants catch up during the lockdown. Stuff like that.

Doctors Assemble! The other big adventure had all the players who'd incarnated the Doctor collaborate over their TARDISes' telepathic circuits (i.e. Zoom) to stop a mysterious pandimensional entity from invading Earth. They played it for laughs, but a couple of players took the threat more seriously and handled it - credit goes to Colin (Doc6) and John (War Doc) mostly.

The Secret of Novice Hame. Another case of NPCs getting their due, but Russell included David and his 10th Doctor in the proceedings, together creating a memorably sad scene, though not a proper adventure.

The Best of Days. GM Steven gets his last players, Pearl and Matt, on a Zoom call to expound of where their characters are now. Matt decides Nardole hasn't really moved an inch, while Pearl completely changes Bill's fate, returning her to Earth and involving her in current events.

Daleks! Some of the players get together, masked and gloved, to play a war game scenario using miniature Daleks and Mechanoids. There's a larger "role-played" plot about some primordial creatures trying to gain a foothold in our universe, but it's really more about doing voices as miniature soldiers destroy one another.

U.N.I.T. On Call. Emily acts as GM on a Zoom call, basically acting like she needs UNIT's help while players associated with that era goof on their campaign's tropes.

The Genuine Article. GM Russell and player David once again team up, this time to take down the Son of the Abzorbaloff. As with many online games, it's really a reason to joke around until the slim scenario is tapped out.

This would prove the last Lockdown game - as the pandemic became the new normal, club members would feel less and less of a need for this games. Russell was even thinking of coming back to handle the main game once Chris was done, so he needed to keep his ideas up his sleeve anyway.

But what WAS Chris working on? Stay tuned!
Doctor Who RPGs Sarah Jane Adventures Seasons of DWAITAS