Ryan and Graham: The Character Sheets

Category: Seasons of DWAITAS
Last article published: 9 May 2022
This is the 102nd post under this label

In the spirit of each successive series seen as a Doctor Who RPG campaign, Tosin and Bradley have handed in their character sheets before leaving. 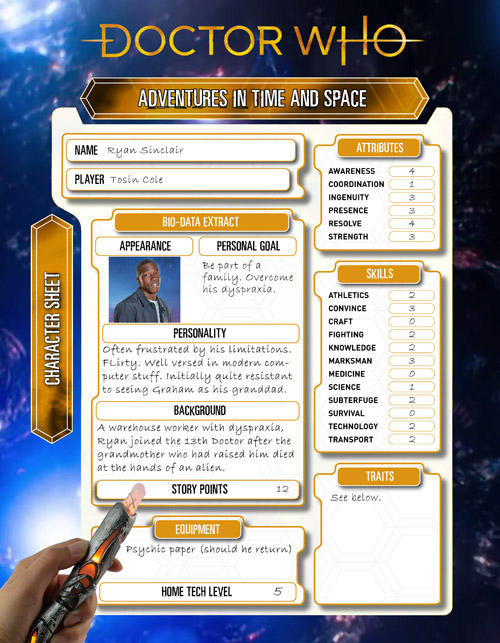 Stuff that didn't fit on Tosin's sheet, kept on the back...

BAD TRAITS
Argumentative (Minor)
Impulsive (Minor)
Phobia (Minor) - Spiders
Special: Dyspraxia - Treat as Clumsy for actions requiring motor control, like climbing ladders and riding bicycles, unless either he takes twice as long to do the action, or Ryan has practiced them daily for more than a month. Actions he has so trained include running, marksmanship, driving and video games.

FAVORITE METHOD FOR ACCUMULATING STORY POINTS
Ryan used dyspraxia as a point engine, taking longer to do actions on purpose and increasing the risk of monsters catching up. 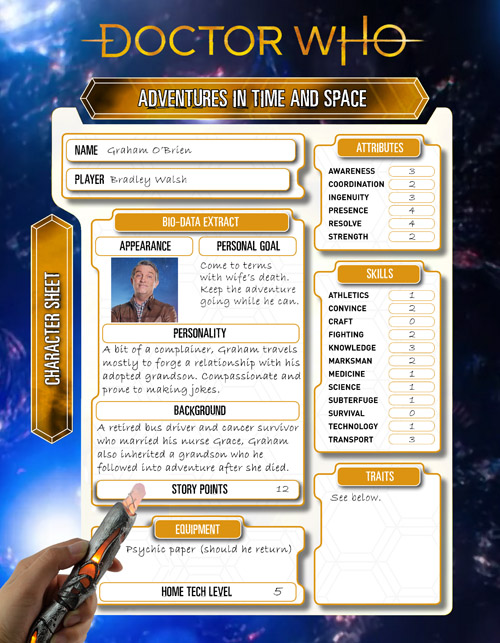 Stuff that didn't fit on Bradley's sheet, kept on the back...

BAD TRAITS
Passionate Love (Major) - He still loves Grace, and sometimes thinks he sees her.
Special: Cancer survivor - Though he is free and clear of the cancer that once threatened his life, there's always a worry that it will come back.
Unadventurous (Minor)

FAVORITE METHOD FOR ACCUMULATING STORY POINTS
For Graham, it's all about family. Whether letting his grief lead him to make mistakes, or his devotion to trying to forge a better relationship with the resistant Ryan, Graham places himself in physical and emotional jeopardy. The GM rewards his strong role-playing with Story Points to burn, which he often uses to boost others' actions.