Category: Saturday Morning Cartoons
Last article published: 9 July 2016
This is the 6th post under this label 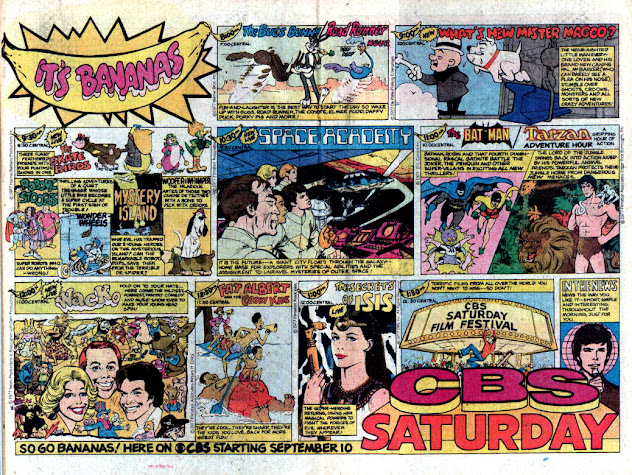 This ad for CBS's 1977 season makes me question my memories. In '77, I was 6 years old and not yet able to understand English. Furthermore, while it's possible I watched many of these shows at my grandparents' houses which had color TVs (I'm pretty sure), we only had a black and white set until somewhat later. Yet I have memories of watching and enjoying several of these shows in color. Or maybe not. This could be the reason why I was surprised, later in life, to find out the cartoon Bat-Mite (ubiquitous in these "thrillers") was pink! And yet, my memories of Tarzan, starring in the same "Adventure Hour", are in color.

Well, memory can certainly add color. And kids can certainly invent their own stories even if the dialog is more or less gibberish. We might also wonder how long some of these shows were rerun, where, and in what language, all factors that might contribute to my memories of these shows, but clear memories of IN THE NEWS and its spinning globe, so I was probably tuned to CBS itself. Batman and Tarzan, at any rate, were still part of the line-up in 1980.

What do I specifically remember? In addition to the Batman/Tarzan hour, it's hard to not have memories of the Bugs Bunny/Road Runner Hour, because all those shorts were packaged and repackaged (and translated) multiple times. I also remember Mister Magoo, but was it this season's material? For better (Loony Tunes) or worse (Mr. Magoo's single basic joke, but I liked it well enough), these are long-lived classics. You could say the same of Fat Albert, but this was the show that told me the morning shows were ending as live action peeked in. I know I also watched the Robonic Stooges and call me a heathen, but when you mention the Three Stooges, my mind probably goes to this weird variant before the real deal. Vague memories of The Secrets of Isis, Woofer & Whimper, and maybe Wonder Wheels. I seem to have switched the channel during The Skate Birds, Mystery Island, Space Academy and Wacko as I have no idea what those are. And was outside playing for the CBS Film Festival.

Now will someone tell me what any of this has to do with bananas? Was Tarzan so big?

Did you watch any of these shows? Drop some memories in the comments section!
Batman Saturday Morning Cartoons

Mike W. said…
Yeah, I think you and I are pretty much in the same boat (except for me being an Anglo); I was five in 19977 but we had a B&W TV until into the early 80s and being in small town Saskatchewan, we only had two channels (CTV and CBC), so no American cartoon lineups on Saturday mornings.

I seem to recall watching Gilligan's Island on Saturday mornings, as well as Roy Rogers and stuff like that, plus Canadian shows like Circle Square, Let's Go, and (of course) Hilarious House of Frightenstein. It wasn't until we got cable that I saw shows like the Smurfs and Alvin and the Chipmunks.
May 16, 2022 at 3:09 PM

ShadowWing Tronix said…
Tarzan, Batman, Skate Birds, Fat Albert, and Secrets Of Isis I did watch. Space Academy no, but I was a fan of the spin-off Jason Of Star Command as a kid. I don't remember Saturday Film Festival or Wacko...it's the first time I've heard of both as far as I recall, but In The News was around for most of CBS's Saturday Morning run.
May 16, 2022 at 3:35 PM

Siskoid said…
Mike: We got the American stations out of Maine seeing as we were next to the border. Or else it might have been like that too.

joecab said…
I was really aging out by this time so I didn't really watch any of them. I did catch the Robonic Stooges when they moved to Sunday mornings. Not bad! They had a nifty screen transition too.
May 16, 2022 at 9:03 PM

Russell Burbage said…
I didn't watch any of these, unless Space Academy had Jonathan Harris in it? I watched whatever he was in, but mostly I was an ABC-TV fan (Super Friends, Laff-A-Lympics, etc).
May 16, 2022 at 9:41 PM

ShadowWing Tronix said…
Russel, Harris was in Space Academy. He played the instructor, Commander Gampu.
May 17, 2022 at 2:35 PM

googum said…
I have been trying to find Mystery Island somewhere: it ran with something besides Skatebirds later, since I have no recollection of that one.
May 17, 2022 at 3:06 PM