Being a look back at cards from the Star Trek CCG, and what I thought of them back when they were fresh and new... in EPISODE order. Annnnd back to the Klingons. 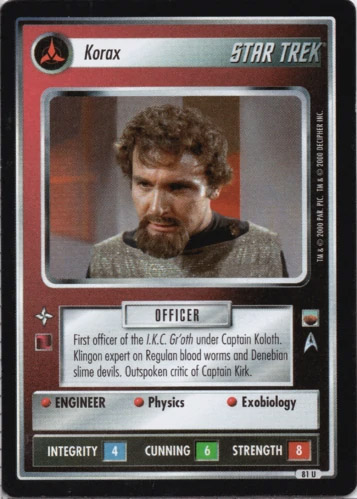 PICTURE: This shot of Korax goading Scotty into a brawl is made more Klingon by the red tints in the background, so it gets elevated to a little better score than it would otherwise have had. A cool enough 3.5.

LORE: Played for laughs, once we get his posting and rank out of the way, it goes right into his insults of Kirk and the Enterprise. The idea that he's an expert on certain animals because he used them as insults is pure tongue-in-cheek fun. A likeable 3.7.

TREK SENSE: He's the first officer of the Gr'oth, which makes him an Officer, but for some reason, he's not a Command personnel. That's possible, but unlikely. Maybe Koloth holds the reigns of power too tightly to let anyone else give orders, or he might have demoted Korax after the brawl, but since none of that is ever mentioned, the Staff icon can't be properly justified. His skills are, as far as I can tell, a follow-through on the joke in the lore. He compared Kirk to some repulsive creatures, so he's somehow an expert in them (Exobiology). Similarly, he evaluated the Enterprise to be garbage, so he could be an Engineer (opposing him to Scotty this way makes poetic sense). Physics isn't explicitly implied this way, but if you accept him as an Engineer, then Physics is a related skill. There's no proof of any of this, but it can't be disproved either. It's just a fun way to arrive at a skill list. Being pretty nasty and antagonistic, he's got low Integrity. Not very smart to start a fight on a Federation station, his Cunning's low too. The Strength of 8 makes him a brawler, while somehow implying the top Strength of 8 for TOS Klingons (they were closer to human then). Though they had to invent most of the information, it's all very entertaining. Is 3.8 too generous?

STOCKABILITY: There aren't enough OS Klingons to really build an exclusive deck around them, but if you'd like to primarily focus of them, Korax is their only ENGINEER, their only Physics personnel, and their only Exobiologist. He can share any of those skills with a Classic Communicator, but you can see how the micro-affiliation couldn't survive without support. ENGINEER and Exobiology in particular are too important in multiples to lend them only to a single unique personnel. In a not-purely-OS Klingon deck, he's still downloadable to the IKC Gr'oth, reportable for free to K-7, etc. All his skills can be found on lots of Klingons missions, though of course, none of them are rare in the larger affiliation. The combination of skills is unique though, and both ENGINEER/Exobiology and ENGINEER/Physics show up on missions. All depends on your deck, I suppose. A 3.3.