What a Card: Lt. Uhura

Being a look back at cards from the Star Trek CCG, and what I thought of them back when they were fresh and new... in EPISODE order. Someone very interested in tribbles... 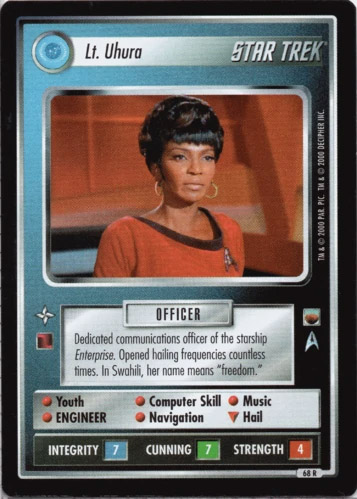 PICTURE: Though Decipher limited itself to images from Tribble episodes for their main OS personnel, Uhura didn't get screwed over. She's beautiful in her pic and Chekov was digitally removed from the frame for good measure. Her black collar adds movement, and she has a strong sense of personal style between the earrings and eye make-up. A good composition in the background keeps our attention on her, but the color palette is a little homogeneous. A good 3.7 despite not being at her station, which is really how we know her. (Then again, she escapes the cliché.)

LORE: Not bad, not bad. I like that she's "dedicated", as you'd almost have to be to do such a boring job ;-). The second sentence testifies to the monotony and takes a good-natured jab at her lowly role on the show. The meaning of her Swahili name is a great detail I'm glad they included. Thumbs up: 4.1.

TREK SENSE: OS communications officers are like TNG Ops officers - they're in the Officer classification, but wear engineering colors. Still, their position on the bridge and only tangential connection to engineering matters makes this appropriate. Uhura has Engineer anyway, and we have seen her poking around under her console. Communications itself seems to be Computer Skill-driven, operating the switchboard if you will. We've seen her at least once piloting the ship (Navigation), taking over for O'Riley in "The Naked Time". She's a great improvisational singer, accounting for Music. Now, I think they're always a bit quick to stick Youth on young, beautiful women even when they aren't that young (a Lieutenant here), but with Uhura, they're at least consistent. The special download couldn't be more perfect for a Com officer, and Uhura in particular. Women were usually portrayed as damsels in distress in TOS, so the Strength is fairly low (but can account for her showing some chutzpah in "Mirror, Mirror"), and the Integrity isn't that high (she's dedicated, but not always courageous). Cunning's about right - she's smart, but rarely has a flash of insight. Uhura often seems like a background character on the program (especially in later seasons), but they've allowed her to do a lot of things, and that shows in this large skill list. No major problems, I'm going with a 4.5.

STOCKABILITY: With such a long skill list, Uhura can plug a great many holes in your OS deck, AND share those skills via Classic Communicator. Among the most useful are Computer Skill, ENGINEER and Navigation, all very common (of course, less so in the OS subset), but all very frequently required of cards. OFFICER isn't bad either, not as good as ENGINEER certainly, but better than CIVILIAN. Youth and Music aren't as good, even if they have a better chance of being used in a Fed deck (Risa Shore Leave, Camping Trip and Study Plasma Streamer come to mind). Being together on the same card means she's a null when it comes to Ooby Dooby. Thankfully, she has a good special download. Hail stops a passing ship in its tracks. Now, with Captain Kirk aboard too, it's a good way to ambush that vessel. Cross over to the other universe, and it'll allow the evil James Tiberius Kirk to kill a crew member with his Tantalus Field. Got intruders aboard (or decided to beam down to a planet to battle an Away Team)? Suddenly switch her to Commander Uhura and capture all the males there. Youch! Great switcheroo! Kirk and Uhura on a Stolen Attack Ship with Invasive Transporters could do a LOT of damage and kickstart a Federation capture deck very quickly. So despite a less-than-essential skill list (but not a bad one), she gets her licks in. 3.9 I'd say.