What a Card: Mr. Scott

Being a look back at cards from the Star Trek CCG, and what I thought of them back when they were fresh and new... in EPISODE order. Let's stick to bridge crew for a couple of weeks... 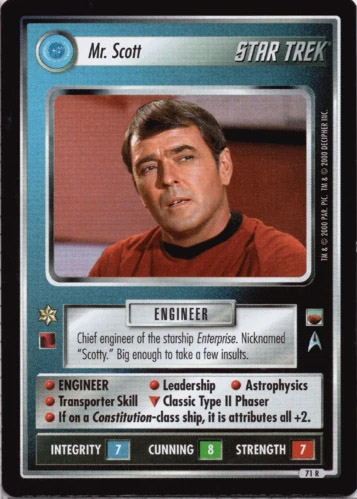 PICTURE: The restriction that all OS mains come from "The Trouble with Tribbles" isn't such a bad thing for Scotty, since his moment (facing off against a Klingon) is a memorable one, but there might have been possibilities in others. "By Any Other Name" comes to mind, I dunno. Anyway, good pic, with an interesting deco background. 3.5 should do.

LORE: Shortened for extra game text, we do get that last sentence that's from the episode itself, fairly funny given that he *couldn't* take an insult, not about the Enterprise anyway. The rest establishes him as a "Scotty" more clearly than the lore on the TNG-era Montgomery Scott, and of course, mentions his post on the Enterprise, which is pretty routine. Enough for a 3.6.

TREK SENSE: No Miracle Worker, but that label wasn't introduced until the movies. He's still the chief engineer, accounting for his 2 Engineer. Not just the chief there, but also cleared to command the ship (3rd in command), so Leadership and the Command icon are there too. He's run the transporter room, and they didn't forget Transporter Skill. Astrophysics looks right, but I've got to think a little more about when he used it. I believe the Dyson sphere incident established it somewhat for his older self, so it's carried over to the past. No real use of the bagpipes in the original series, even if they were perhaps seen in his quarters, so no Music. It might have been a good thing though. The special download may be due to his acting as a sort of security detail leader in many episodes, but it's not like he pulled one on the Klingons during "Trouble". The special skill has him boost (through engineering feats, no doubt) not just the Enterprise, but any Constitution-class ship. Boosting the Enterprise alone would have been a close fit, since it's his baby. However, we're told in "Relics" that he served on 11 ships throughout his career. The early days must've had more than one Constitution class - it was just about the only class of starship in service for a while there. He would know enough to boost any ship of the line. Integrity makes him a good guy still capable of "cowboy diplomacy" (if we can call the bar brawl that). Fighting OS Klingons hand to hand requires 7 Strength? Fair enough. Cunning's high enough for him to live up to his miracle worker label. A couple of oddities keep the score at 3.4.

STOCKABILITY: ENGINEER remains one of the better skills/classifications, but the Feds already have a number of good ENGINEER x2 personnel. Well, OS personnel can add to their skills relatively easily thanks to Classic equipment, making Scotty more than viable. A Classic Tricorder will add a third ENGINEER to his resumé (or SCIENCE or Geology or Physics), while his Leadership triggers the Phaser he downloads, giving him an extra SECURITY in addition to a +2 STRENGTH boost (total 9 at this point). Astrophysics and Transporter Skill are both excellent skills too, whether you're going after missions, dilemmas or even tribbles. To make the Starship Enterprise a better ship, he adds +2 to each of its attributes. Along with other OS personnel's bonuses, that little ship can really hold its own. But wait a minute! He can boost ANY Constitution-class ship, making him as useful to a Spacedoored Starship Constitution, a Mirror ISS vessel, or the movie versions of the Enterprise (Starship and E-A). He can be switched with his Classic Films self, which could be useful to at least download Divert Power, or staff an unusual ship or something. Not much call for it overall though. No, better to use his OS icon to pile on the skills and make him a mission-solving machine. In addition to everything he can do, he'll pass Blended, though be stopped by it. Watch out for that. Good for a 4.1.