Who's This? A well-timed loser. 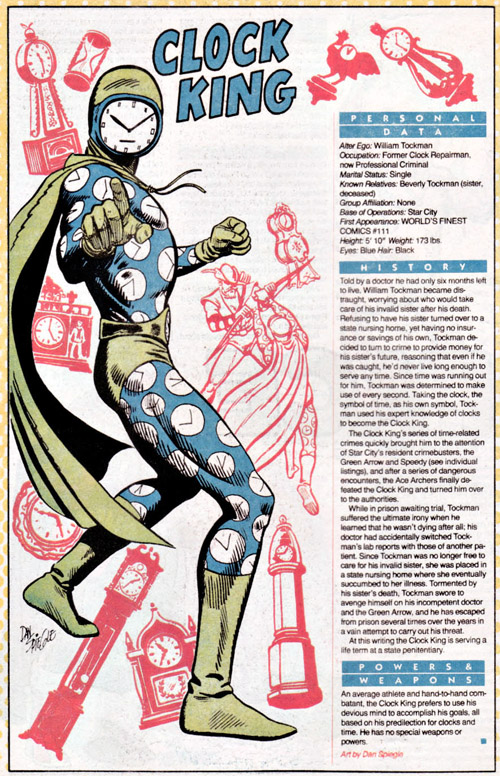 The facts: William Tockman first appeared in August of 1960 as a foe for Green Arrow in World's Finest Comics #111. Though he and Oliver Queen would tangle several times, no one thought he was anything but the lamest of villains and so ended up in Keith Giffen's Injustice League, which game him new life... as a joke. He's killed in Suicide Squad vol.2 #1 (in 2001) with most of the Injustice League.
How you could have heard of him: The name is at least familiar, because a version of him appeared on the Batman '66 show, which opened the way for the Animated Series to pitch its own version. The latter is explicitly not William Tockman and is the less garish Clock King used as a template for the DC villain to come after Infinite Crisis (in Teen Titans comics). The CW DOES have a William Tockman who commits clock-related crimes, appearing in episodes of both Arrow and The Flash, and played by Robert Knepper.
Example story: World's Finest Comics #284 (October 1982) "When the Old Clock Died!" by Mike W. Barr and Dan Spiegle 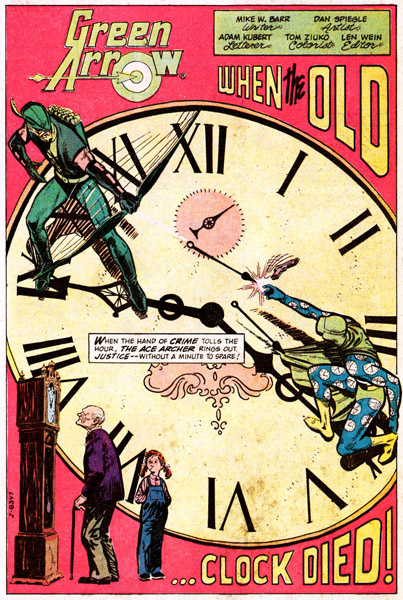 Our story begins with the now run-down home of the Tempus family. With a name like that, they're begging to get hit by the Clock King. The youngest of the clan, an elementary-school girl by the name of Ronnie Tempus, is stealing hot dogs, so they really must have hit on hard times. Her parents are dead and her grandfather only cares about his grandfather clock, which he claims will kill him if it ever stops. Oliver Queen gives the neglected child a ride home, intrigued by this mystery. As publicized, grandpa is obsessed with the clock. The pendulum was set in motion on the day of his birth and he's very superstitious about it. So what would be Clock King's angle here? 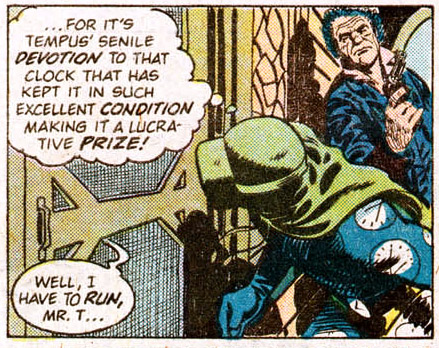 Small potatoes? A quick search online shows that antique grandfather clocks might go at auction for, well, not that much in supervillain terms. 400-1200$ seems to be normal in today's money. The market seems to top off somewhere under 10,000$ for real fancy ones. Up 'til now, Clock King is equal to his reputation. Ollie is leaving as Tockman arrives and he overhears him strong-arming the old man. Ol' clock face makes the mistake of using the girl as a shield and... 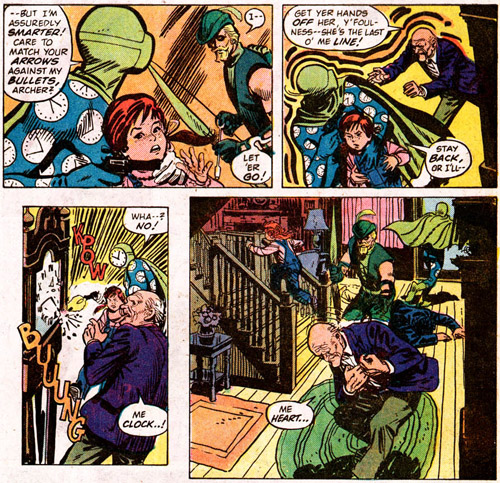 Looks like the old man cared about something other than his precious clock, after all. And though he does have a heart attack on cue, Green Arrow manages to save him. After all, he's given his heart to something better. So what about Clock King, almost murderer by proxy? Well, with the clock smashed, he races out distraught and is stopped by Green Arrow, right? Nope. GA is too good for him. 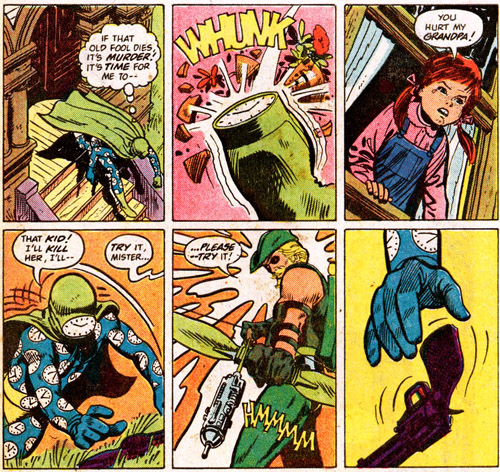 He's stopped by a 10-year-old with a potted plant. And folks, this isn't a Silver Age story! It took place in 1982!!! While I don't necessarily think Giffen's Injustice League was entirely composed of losers, this is probably the fairest addition to the team. Of course, you knew that from just looking at the costume.

Who's Next? A bargain-basement Riddler.
Comics Green Arrow Who's This?