Who's This? A bargain-basement Riddler. 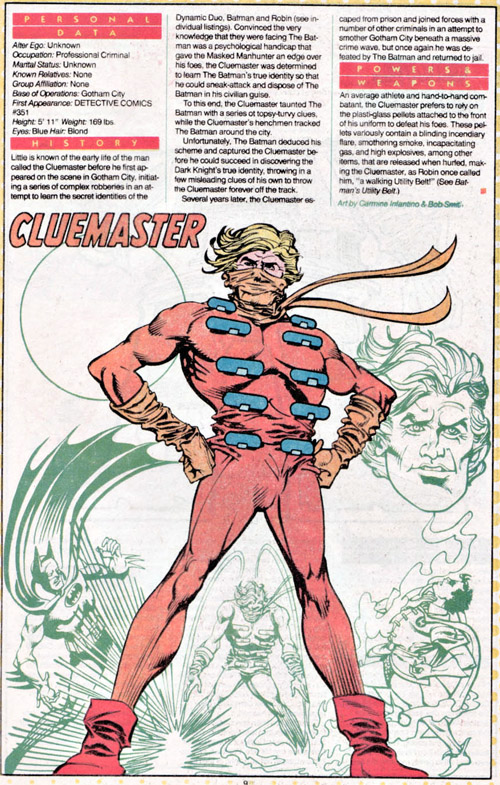 The facts: Created by Gardner Fox and Carmine Infantino, Cluemaster first appeared in Detective Comics #351 (May 1966) as a crook who wore his utility belt on his chest, and left clues like the Riddler did, though these weren't riddles. You have to remember that the Riddler, after appearing a couple times in 1948, wasn't brought back until 1965, which is still a year before Cluemaster AND by Fox as well. Still, maybe they weren't convinced the Riddler was the best clue-dropping villain to go forward. The Batman TV show would change all that and cement the Riddler as one of Batman's most memorable rogues. And so Cluemaster only appeared sporadically and eventually made his way to Keith Giffen's Injustice League. Not the most ridiculous of the team's members, he might have been chosen for his proximity to Clock King in Who's Who. Perhaps we were lucky not to get Colonel Computron too. Anyway, what saved Cluemaster from a permanent end in Suicide Squad vol.2 #1 along with the rest of the Injustice League was the idea that he was Stephanie Brown's father. When he makes his return in the mid-2000s, he has a stronger link to the Batman Family through Spoiler/Batgirl, and manages to rebrand himself as an important underworld figure, especially in Chuck Dixon's books.
How you could have heard of him: Both the New52 and Rebirth have used Cluemaster, though often as a team player (harking back to his early days as a member of the Gangland Guardians, not kidding). He's also appeared on television, notably in The Batman cartoon show and the Batwoman live action series.
Example story: Detective Comics #647 (Early August 1992) "Inquiring Minds" by Chuck Dixon, Tim Lyle and Scott Hanna 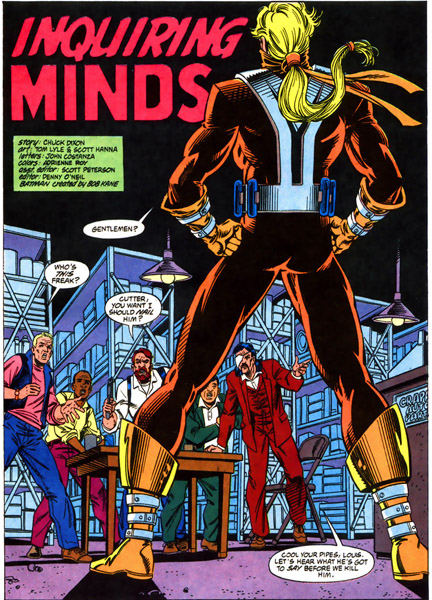 Chuck Dixon first attempts to salvage Cluemaster from his Bwa-ha-hell, this issue presents us with an Arthur Brown who has been cured of his compulsion to leave clues. Not gonna be caught out by a certain detective this time. They've also tried to fix the costume, if not the color, with a big bracing belt that looks more modern and breaks up the leotard a little. It basically makes him a walking utility belt who can take care of himself. 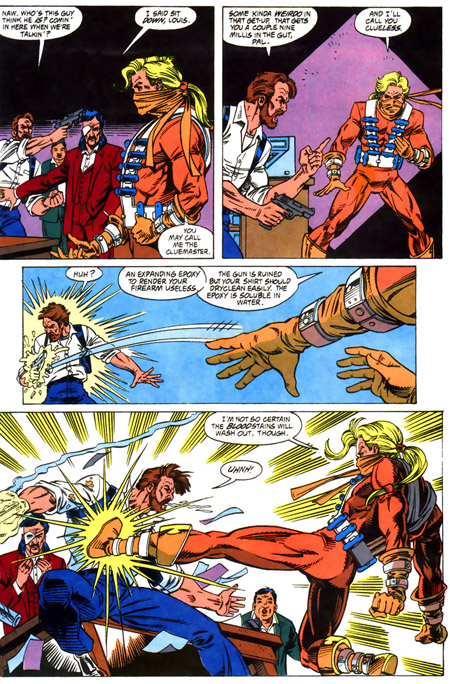 He's also still got a brilliant mind for planning heists. He just needs a gang to carry them out, and is more than happy to just take his cut and not usurp the leadership from this guy Cutter. Just handing the gang fat scores for a share of the profit, what could go wrong? 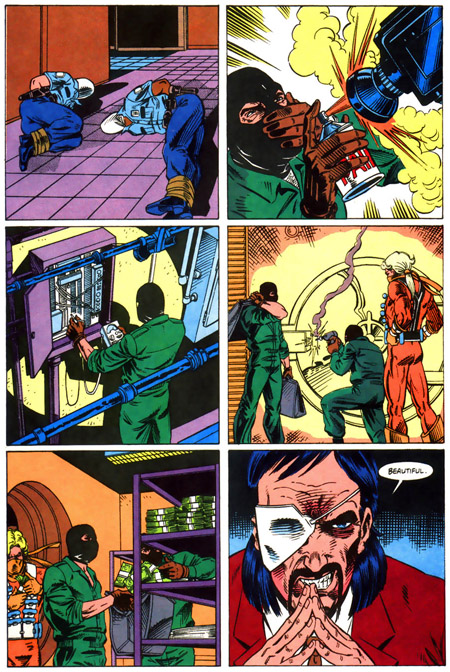 At first, nothing. But if he's been cured of his compulsion to send clues to the authorities, why did Gordon just get a puzzle piece and a note that says "Catch me if you can!"? Cut to a young blond woman preparing envelopes with puzzle pieces in them. Not too hard to figure out that she and cloaked figure listening in on Cluemaster's gang are one and the same... 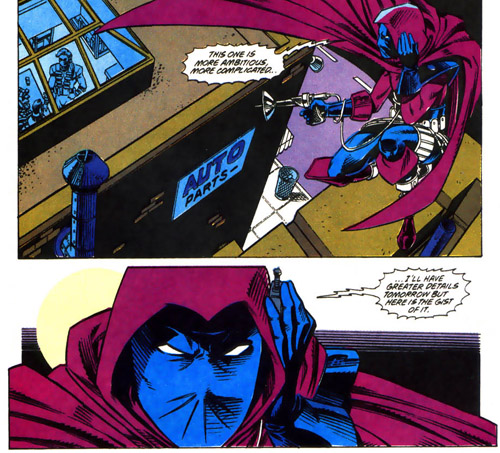 Ladies and gentlemen, the first appearance of Spoiler! At the time, this was a mystery, but today we immediately get that Steph is trying to get her father back to jail by using his old shtick against him. Batman and Robin track Arthur down and he claims he did his time and was cured of his criminality (half true). Though the heroes back off, Brown was seen with them and Cutter's even heard of the puzzle pieces sent to the police. He doesn't trust Cluemaster one bit. Seems that every time Cluemaster sees some action, it's against other crooks. Has he thought of going straight? 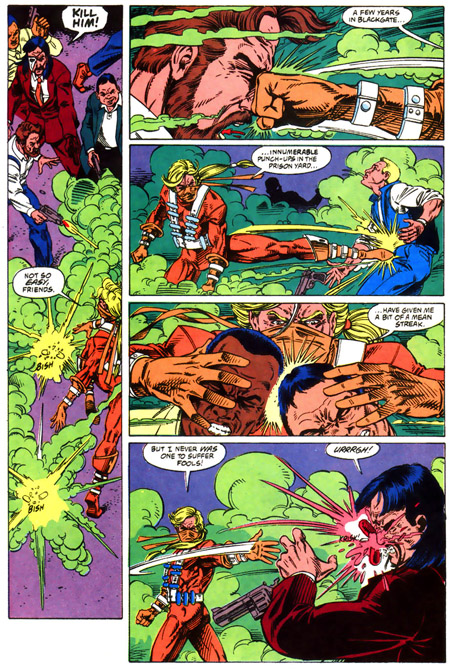 That resin to Cutter's face hardens and asphyxiates him, leaving the door open for Cluemaster to take over the gang anyway. Heist can wait. Batman needs to be taken out of the picture, and that impostor sending clues to the police has got to be found and killed. Ironically, it's his own daughter!

So a nice little reboot for the villain that would eventually take him to greater levels, especially in the worlds of Robin and Batgirl. The costume is still a little silly, but greater integration into the Batman Family has done him a world of good.

Who's Next? A video game villain.
Batman Comics Who's This?