Who's This? A video game villain. 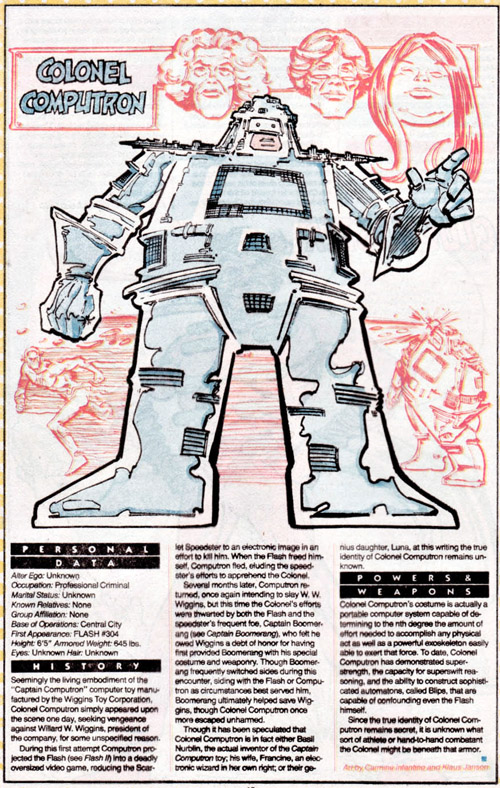 The facts: The electronic game game fad led to the creation of game designer Basil Nurblin becoming Colonel Computron in Flash #304 (1981) by Cary Bates and Carmine Infantino. His original appearances left it ambiguous as to whether it WAS Basil, or instead his wife or daughter (Luna WOULD wear the armor in a Will Payton Starman story). From there, few appearances - a return engagement with Wally West's Flash, a small part in a JLA issue, and the events leading to his death in Checkmate vol.2.
How you could have heard of him: The New52 anthology mini-series Legends of Tomorrow had him tangle with (checks) Sugar and Spike. Oh the dishonor. The Flash TV series did use Norblin, but as a weapons dealer, not as Computron.
Example story: The Flash #304 (December 1981) "One More Blip.. and You're Dead!" by Cary Bates, Carmine Infantino and Bob Smith 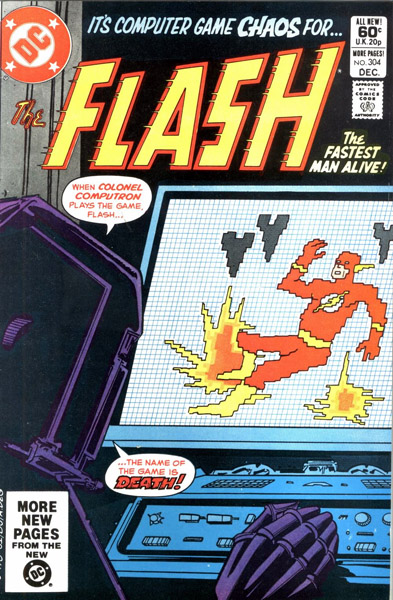 I'm gonna try my best to be fair to Computron, but this issue is so badly put together, it might be difficult. Infantino in particular is really struggling, failing to center letters on a sign here, and giving us a confusing wide shot where Barry Allen's voice seems to come out of a window washer there, in addition to cramped, awkward panels. His Flash stuff is much better, but he seemed in a rush through the opening pages. Colonel Computron is named after an electric toy called the CAPTAIN Computron, a sort of Simon or Merlin, according to the description (if any of you remember those), albeit one with big spikes coming out of it to poke your kids' eyes out. Oh, and it can also create an electronic assassin that, in this case, blows out a wall in the apartment of Barry's neighbor and disappears into a street lamp's electrical system before the Flash can catch it. The Computron (or Mr. Maestro, as it's mistakenly called in once instance) stops working and Barry is asked to check it out. The salesman who sold them the thing also calls to say there was a mistake as this special model was meant to go to the toy manufacturer's home, one Willard Wiggins. What a convenient way to get the Flash into the story.

The Computron/Maestro is the invention of sycophantic employee Basil Nurblin (because that's totally a name) and Wiggins is the Edison-type who rewards him for the millions of units sold with a bonus check of 99.95$. So he's got a motive, even if he plays the meek mouse to his wife. Her motive would be to redress her husband's failures, but he's the one with the skills AND says he's got a reason for his peace of mind. Who's Who, was this really a big mystery? Other than the unshapely outfit and the electronically masked voice, I'm not sure I see it. Speaking of which, look who's sitting in Wiggins' study?

The cigar is a nice touch. But what can robo-Kingpin DO? Uhm... about what you'd expect out of the Kingpin, actually. 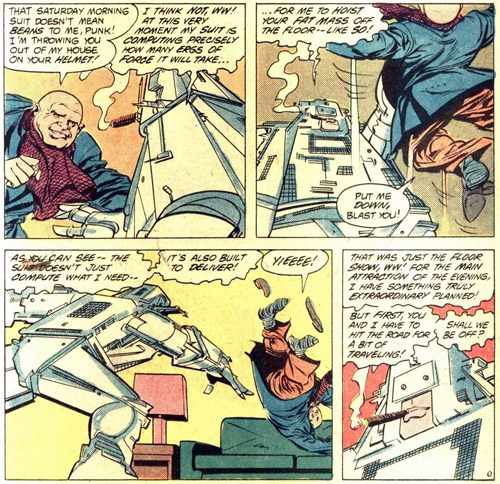 He also uses small robot bodyguard called Blip-One and Blip-Two, but he's keeping his best (and most absurd) moves for Wiggins' execution: Turning him into a bit map video game character where he could fall prey to deadly NPCs. Of course, the Flash takes the hit in his stead. 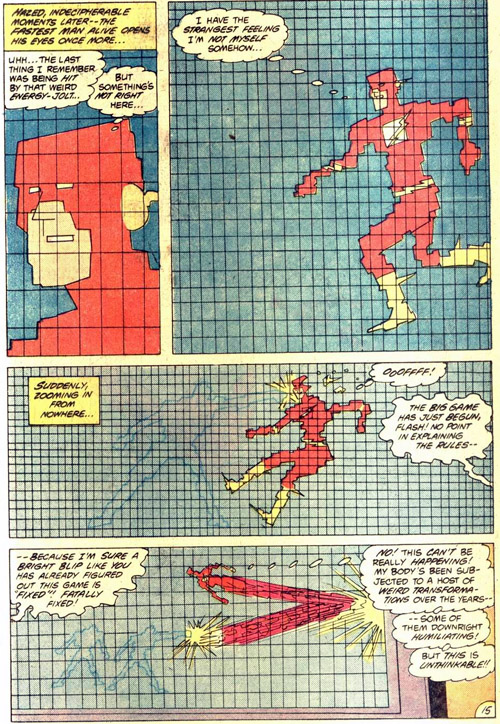 Those are NOT the most visible surprint-men. On the one hand, this works as a tribute to all those weird Silver Age transformations the Flash was subjected to (most notably, Abra Kadabra's marionette trick), but on the other, a guy who invented the Merlin game can produce these effects?! 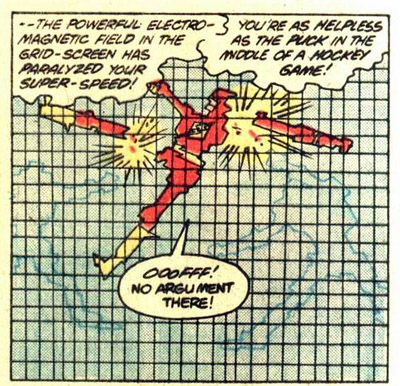 Computron, man, that is NOT how hockey works. The Flash is losing molecules with every second so he needs to get out of there. The Flash can control his vibrational frequency, and that seems to work even if he's an electrical impulse, so even if his existence is tuned to the game screen, he can change and get out through the wiring. And because this is one dumb script, he can then vibrate himself back into flesh. By the time he's done so, Computron has disappeared into thin air, no doubt switching himself to electrons and transporting himself elsewhere. Let's look in on the Nurblin household for clues. 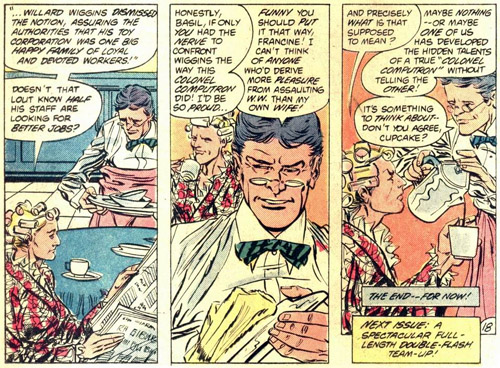 So the only reason there's any question as to Computron's identity is Nurblin himself casting doubt? Like, if it's not her, she knows it, so it's all nonsense. Ok, whatever.

All things considered, Colonel Computron is lucky to have had as many appearances as he did.

Who's Next? A technicolor hero.
Comics Flash Who's This?