Category: Siskoid as Editor
Last article published: 14 June 2022
This is the 41st post under this label 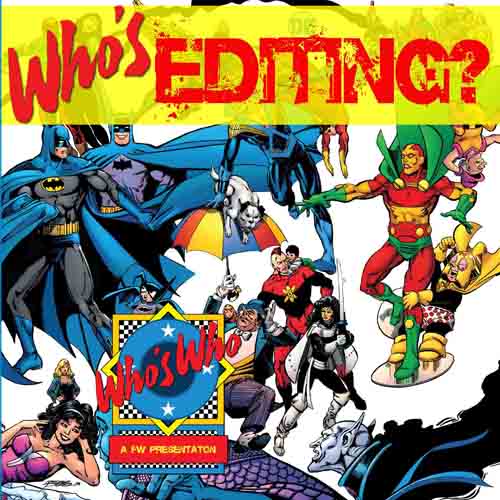 Show: Who's Editing?
Premise: The show where armchair editors re-imagine the DC Universe based on single issues of Who's Who!
Available: Fire and Water Network, Apple Podcasts, Spotify, Feedburner
Number of episodes to date: 17
The first was I was on was about... Who's Who #1, naturally, with guest Ryan Daly.

How it all began
As reported elsewhere, I've long had a love affair with Who's Who. Of course, on the Fire and Water Podcast Network, Who's Who is the purview of Rob & Shag, in fact one of the network's corner stones, I dare say THE corner stone on whose popularity the house was built on. So I avoided doing anything with Who's Who for the longest time, instead turning to Marvel Universe Deluxe for my show with Hot Squad (though we have since started to cover Who's Who as well). But I think about Who's Who so much, the ideas kept coming. One in particular: Taking any given issue of Who's Who and imagining a line-up of monthly titles based on that single issue. As it's talk radio, I decided I could only do it with a guest, and so you'd have two takes on the characters. At first I didn't think the issues needed to be done in order, nor that Who's Who was the only encyclopedia series that could get the treatment. That changed early on. Not knowing if this would be a lark of short duration or what, we decided to put it on the FW Presents feed, where casual ideas like this can get an airing without going through the whole feedburning process. Of course that too would change.

The Process
We can perhaps credit the first guest, Ryan Daly, with cementing the formula. He had his pick of issues and went for #1 (having already done some of the Aquaman-related work in his youth - I'm not the only member of Geeks Anonymous), which seemed to suggest we WOULD be doing the issues in order. And if in order, then only Who's Who. Listeners agreed, as per the comments section. As it turned out, a lot of people were intrigued enough to offer their services on an upcoming issue, and early on, I decided I would not reuse a guest until I'd gotten to the halfway point (past #13). Some guests treated their line as the sole DCU, others as part of a larger universe. Some guests had a classic, even nostalgic approach, others used the names and reinvented the I.P.s. Some guests put everything in the context of a giant line-wide event, others kept their series separate. Because I had to do the exercise every time, I mixed it up, eventually checking with guests to get a sense of their tactic so that I could try and contrast it.

I don't normally script my shows, but Who's Editing? almost has to be. I write down each pitch, often in order of appearance in the issue until it's all done, which usually takes me a 2-3 days, but some nuts are harder to crack and take longer. Writing it all down also helps me make sure the pitches are the right size, which is to say, no longer than the elevator ride would permit. Different guests had different processes of course, and I know the more detail-oriented ones probably found my editing painful. It's just that as each episode's  "first listener", if I want to get off the elevator, the pitch is too long. Who's Editing? is a strange listening experience (see below), and it's easy to lose the audience. Another guest who proved important was my good friend Shag. Coming in at episode 3, he's the one who suggested with play a game where we each had enough money to buy one (1) title from the other editor's line, and that's been part of the formula ever since and a good episode closer. The other little feature is all my own, but not alway easy to do: Once the end music is over, there's a clip of a comic book professional discussing one of the characters from the issue, in essence playing "Editor" the same way we just did.

At some point, I found that this "lark" was coming out bimonthly, regular as clockwork, so I decided to put it on its own feed where a new listener could easily find every issue/episode. And we're still barrelling towards issue 26 at that rate!

Reception
On his second appearance, Shag made the point that while you listen to Who's Editing?, your own imagination takes off and starts doing the Editor's work. You then come back to your senses, and you've lost the plot. There are so many ideas coming at you in the span of an hour that it's easy to be overwhelmed. Heck, it's kind of overwhelming for the podcasters too! I always say "what would YOU have done with these characters?" and the comments section is peppered with additional ideas. And then there's Diabolu Frank. This idea obviously resonated with him because since the beginning, he's gone the extra mile (and we may have run out of road and forced him off a cliff). He not only reimagined the characters from issue 1, but gave them Previews-style blurbs, linked to art that might do as covers, etc. Then in issue 2's comments, he continued that continuity with #2 issues of the same characters, but integrating characters from issue 2. And so on, where his line is currently 17 months in. And when he's been ON the show, he's created completely new lines unrelated to these. He doesn't think people read his long Previews notices, nor does he think they should. It's just something he needs to exorcise. Well, if I can be of service. Frank also frequently mentions the show on his DC Encyclopedia ramblings over at Rolled Spine Podcasts, explaining how he made his decisions regarding that alternate DC Universe. Super-fan.

The Future
Still about a year and a half on the clock to get to issue 26 and it's almost all booked up. But does the show continue after that? The Updates are difficult because a lot of characters repeat. With different guests, you'd get different results, but I'd still have to find ANOTHER idea for Batman or whoever. Just skip the repeats? Does that mean I'm doing more than one issue per episode to make up the numbers? Or would it be time to jump tracks and do episodes based on Marvel Universe, or one of those one-off encyclopedias showcasing the Valiant or Protectors universes? A break from all the pitch writing does sound nice too (how many have I done already?). Plenty of time to think about it...

Did I answer all your questions? Let me know if you have others about the show.
Podcast Siskoid as Editor