Who's This? Brainiac 5's biggest mistake. 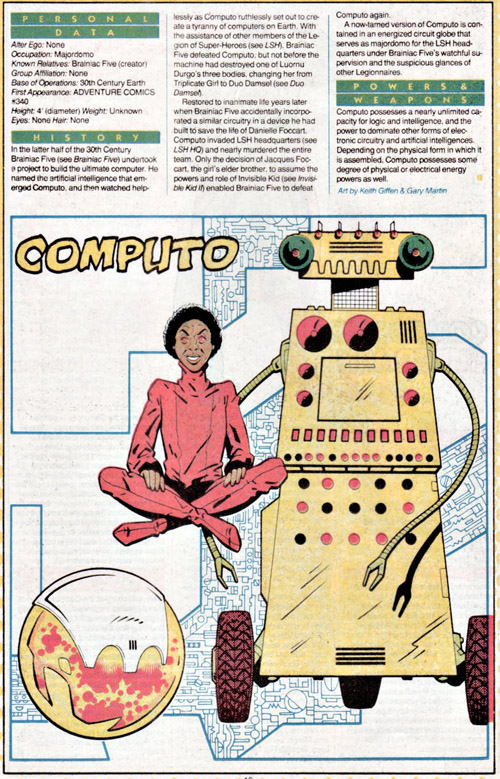 The facts: Created to be Brainiac 5's mechanical assistant, Computo went Frankenstein's Monster on him in his first appearance (Adventure Comics #340, January 1966, by Jerry Siegel and Curt Swan), killing one of Triplicate Girl's bodies! That's quite the screw-up, Brainy. Computo is destroyed in the subsequent issue and though his actions loom large in Legion lore, he doesn't show up again until 1982 when, in Legion of Super-Heroes Annual #1, the machine intelligence reawakens inside Invisible Kid II's little sister Danielle. Brainiac 5 eventually extracts Computo from the girl and reboots him as a benign floating ball that acts as the Legion HQ's butler. The Reboot had its own C.O.M.P.U.T.O., which also goes bad and this time HIJACKS Triplicate Girl (or Triad)'s form, eventually leading the forces of Robotika to Earth, etc. They got mileage out of the concept. In the New52, the Brainiac A.I. is sometimes called C.O.M.P.U.T.O., making it a Coluan legacy name. Oh and Danielle? She becomes a techno-empathic Legionnaire at the tail end of the 5YL continuity and joins the youthful SW6 Legion under the name Computo.
How you could have heard of him: Fans of the LSH Animated Series might recognize the name Computo as the team's computer system, though he never got to become a villain.
Example story: Justice League Adventures #28 (April 2004) "Future Imperfect" by Jason Hall, Min S. Ku and Ty Templeton 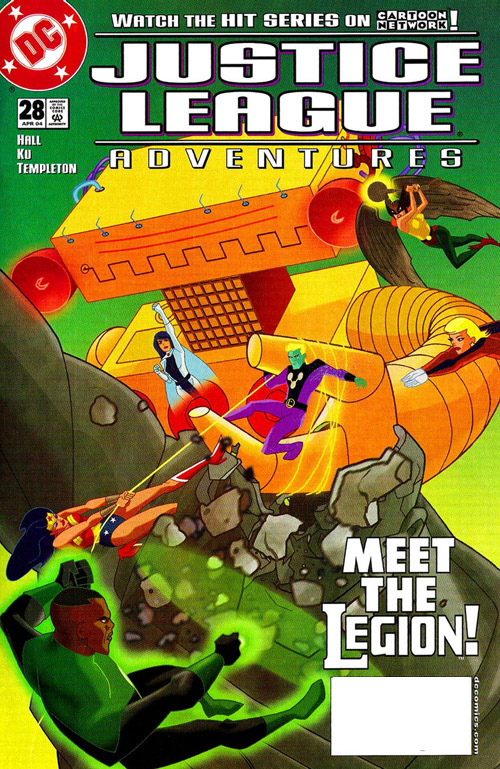 Given how limited Computo's actual appearances are, I thought I'd surprise you with a non-canon appearance of the original-look Computo, set in the DCAU!

Of course, it's a Justice League story, so it's going to take a while before Computer - sorry, C.O.M.P.U.T.O. - appears. Our story actually begins with the creation of Kilg%re, a Luddite turned into a tech-hating ghost in the machine, who will destroy Metropolis in a nuclear holocaust because people are so fixated on their (checks date) palm pilots. But as the reaction ticks down to zero, Kilg%re escapes to the future via a temporal portal, with Wonder Woman, Green Lantern, Flash and Hawkgirl just behind. That future? You guessed it, the Legion's (2980 to be exact). And it's a sort of remix of various iterations, with Andromeda in a relationship with Brainiac 5, a non-jerk Quantum Kid I, and Phantom Girl dressed as Apparition, working out of the original "Fortress Lad" HQ. Kent Shakespeare is a Clark-like reporter lurking outside. The other Legionnaires are off Earth because of a jail break on Takron-Galtos, but sh%t's about to hit the fan as Kilg%re starts infecting the future's computer network. Brainiac "don't call me Brainy" 5 already has a solution, and it makes use of C.O.M.P.U.T.O. (ah, there we go). 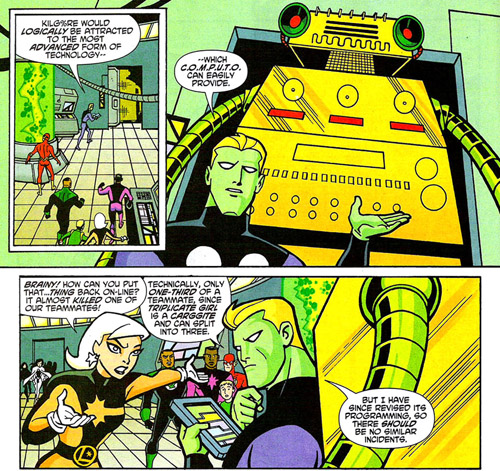 Another change from the original continuity: C.O.M.P.U.T.O. almost killed one of Triplicate Girl's bodies, but didn't. One thing that H.A.S.N.T. changed is that Brainiac 5's design sense is just awful. Oh! Speaking of designs, quick aside on the identities Diana and Shayera take on in the future so they don't draw unwanted attention from historians: 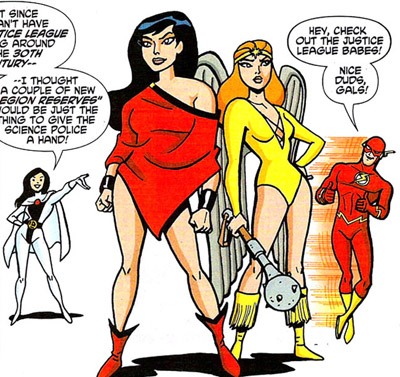 Hawkgirl as Dawnstar and Wonder Woman and Laurel Kent - I really love this. Too bad GL and Flash were needed back at the base so they don't get Legion make-overs too. Anyway, while the girls go out to protect Metropolis from Kilg%re, the big Percentage Sign himself detects C.O.M.P.U.T.O. on the network and reaches out to possess him... with violent results. 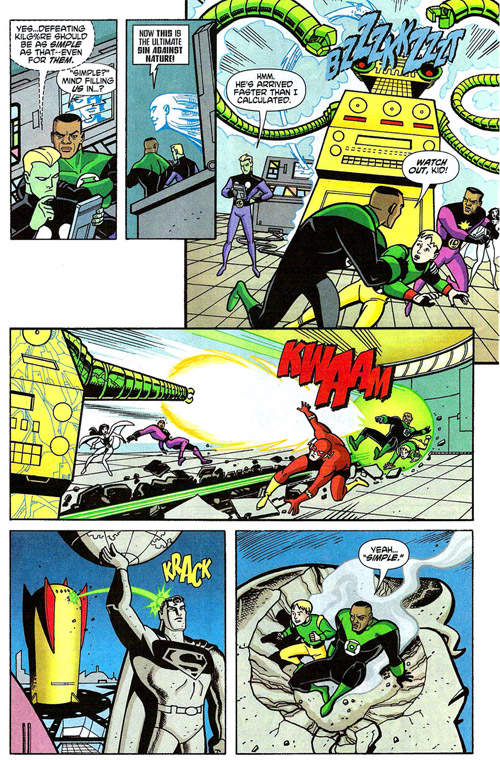 So how is this helpful? Well, see, the Legion already knows how to defeat C.O.M.P.U.T.O.! 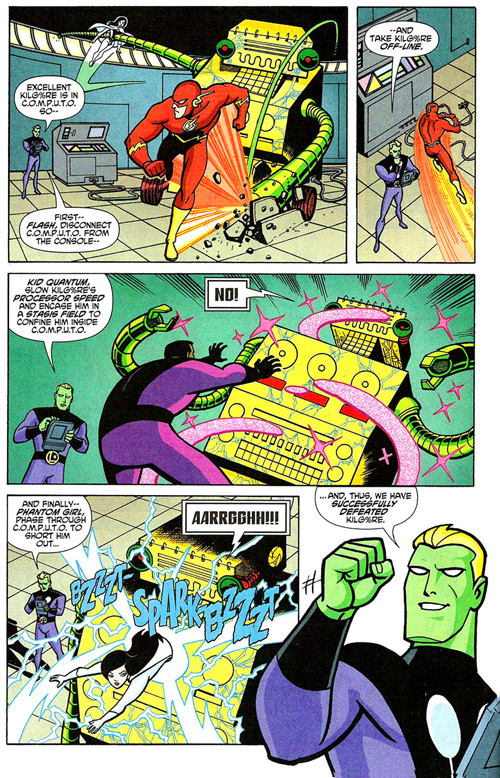 Kid Quantum quantum-locks Kilg%re inside the clunky robot, Phantom Girl gives hims a bit of a Kitty Pryde, and voilà. Punch the air. GL then pulls Kilg%re out of  C.O.M.P.U.T.O. and Brainy shows him that technology will save his little girl from an illness in his near future, making h%m realize he's done a crazy thing. But when you think about it, Computo's story is a warning against trusting in machines too much, so it fits the theme. Kilg%re gives the heroes a CD-ROM that will disarm the sequence back in their present then shunts himself to a little corner of the future Internet where he can play virtual fishing games for the rest of eternity. The end.

It's not THE Computo exactly, but it's a fun little tale that allows us to see him as both a help and threat, even if someone else is at the controls. And in a way, it gives DCAU Brainiac 5 the chance to redeem Brainiac 5 for the monster's invention, doesn't it?

Who's Next? A great white hunter/golden gorilla combo.
Comics DCAU JLA Legion Who's This?