In theaters: A bit slow and obvious in its set-ups (though not necessarily in its resolutions), The Black Phone nevertheless has a lot going for it. Number one among them is the cast. The kids are uniformly engaging, and I especially like the strong brother-sister relationship (when you grow up "under fire", as it were, bonds tend to be tighter). Madeleine McGraw really delivers and you often wish the movie were more about here, but Mason Thames makes for a good protagonist. Ethan Hawke, playing the child abductor/killer, is unsurprisingly good, his character's exact pathology left up to the audience (but not random). The movie's also go a nice late 70s look. Is it a period piece because 1978 was a more naive time where kids trusted a guy in a van more readily? Or because today the haunted phone would have had to be a mobile? Or was Joe Hill just reconstructing his own childhood (and its fears) in the short story? In any case, it's a clever idea. This may well be Scott Derrickson's best work, though he still feels the need to use jump scares despite the horror being fairly low-level in this (or perhaps that's why). Supernatural yes, but the horror elements don't push the envelope in terms of depiction (and hey, I'm okay with that given the subject matter). 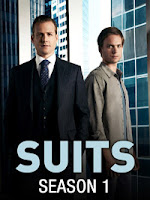 At home: The basic premise behind Suits is a fun one, though I do wonder how they stretched it out to 9 seasons. Even by the 2nd (that's where I'm up to and through), suspension of disbelief has become strained - how long can Mike be allowed to practice law without a degree (photographic memory or not) even though more and more people know his secret? - and the tropes cycling into themselves - how often can Lewis betray his team, be forgiven, etc.? At this point, it still amuses me, and I buy into the fantasy, i.e. that this corporate law firm somehow manages to have clients who are honorable, or makes them morally pay even when it wins settlements for them. Suits in fact usually eschews court room drama in favor of back room shenanigans. Once the week-to-week formula has been established, Season 2 allows itself longer cases and a slimy recurring villain, but also annoying romcom elements where couples have stupid fights to keep them apart, etc. Ultimately, if it still works after two or more seasons, it's because of the humor and the characters, and sure, the leads are good, but I'm watching for a good chunk of the supporting cast. Gina Torres is a great presence, no surprise, but Rick Hoffman is awesome as the comic and dramatic foil, and the best character of all is Sarah Rafferty's super legal secretary Donna. So okay, let's keep chugging. 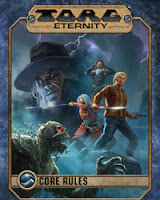 RPGs: Having now read (and reread) through Torg Eternity's Core Rules book, I can now submit a first opinion. (I will be playing it soon, just not yet.) I was a fan of the original Torg, but perhaps more for its concept than its execution. The new version streamlines the rules somewhat, but despite the introduction of some Savage Worlds flavor (not to say SW didn't have Original Torg flavor), the mechanics are still recognizably Torg. Which means different from the norm (the Bonus Chart, the Drama Deck) with additional card mechanics (Destiny Cards, Cosm Cards), though the cards are a separate product. I have them, but you can also find them for free in pdf format at DriveThruRPG. A lot of moving parts, but I like what I see, and a lot of effects require GM and player storytelling. In any case, it's the setting that has to shine, and there, they've really improved things. Older players will recognize the Cosms, but there's now a reason to explore some of the ones that were just boring and/or death traps before. The more generic ones have been given more interesting back stories as well, and Core Earth is more properly utilized as an Action Movie Cosm, with attendant rules and opportunities. Like most high end RPG products these days, it all of course looks very pretty. We'll see how it plays, but as a READ, Torg Eternity's Core Rules do what a good RPG rulebook SHOULD do, and that's make you desperate and eager to PLAY the game.
Geekly roundup RPGs