What a Card: Trouble on the Bridge

Being a look back at cards from the Star Trek CCG, and what I thought of them back when they were fresh and new... in EPISODE order. And even more Troubles... 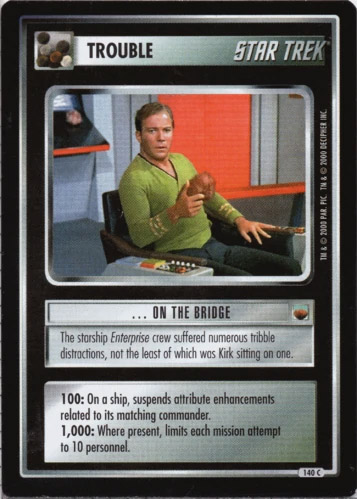 PICTURE: When you think of tribbles, this is one of the scenes you remember. I like Kirk's expression, I like the "apple jacks" color palette... My only criticism is that we don't see more tribbles on the bridge. The "trouble" is silly as it is; they could have put in a few more to add to it. Still a classic moment worth a 4.

LORE: Cheeky and, simply put, the expression "tribble distractions" sounds like an early dilemma idea for this set. A competent 3.4.

TREK SENSE: If you've got tons of Tribbles on your ship's bridge, what happens? Well, when you hit 100, your ship's captain is entirely too distracted to get maximum output from the ship and its crew. Made a fool of, he or she doesn't command the same respect, and of course, you've got the bridge crew distracted by pettings and feedings. In game terms, this suspends Captain's Log and Defiant Dedication Plaque's attribute boosts. Not bad, but what if there IS no matching commander? Couldn't there be disarray there too? Ok, at 1000 Tribbles, it somehow limits mission attempts to 10 personnel. In this case, the card has an effect on Tribbles on a planet as well as on a ship. But, but... where's the Bridge in that situation? As for the effect, it basically states that the crew would be so distracted by 1000 Tribbles that only 10 could ever possibly concentrate on the mission at hand. Without a Bridge being necessary, the card gets conceptual on us - the link is that the "bridge" is the command center for mission coordination. And what if there are less than 10 personnel in the mission attempt? No effect? Just ensign Bobs sweeping the tribble droppings? Being so unfocused brings the score down to 2.7.

STOCKABILITY: Obviously, effects here are mitigated by the fact you need to set up a Tribble side-deck, but Trouble on the Bridge does have some good stuff. When on a group of 100 Tribbles, it's not that great, I agree. Some decks do use a lot of matching commanders to boost ships to high levels, but sometimes, like with OS decks, to simply reasonable levels. So taking out those attribute enhancements could mean easy destruction by one of your ships. I say it's not so great because the 100 Tribbles' own effects doesn't really work with the Trouble card. Played on a group of 1000 Tribbles, it's a whole other matter. Not only do 1000 Tribbles suspend each personnel's first-listed skill, but Trouble on the Bridge limits the number of personnel attempting a mission to 10. I've always hated mega-Away Team strategies where a player hoards personnel, then attempts missions with so huge a number, that even losing one means little (though usually, they've got massive attribute totals and all the skills in the book to cope with dilemmas). So now, they've got fewer skills AND must make a choice as to which personnel go on the mission. This won't do anything if mega-Away Teams/crews aren't used, so the use is limited. And even if they are, I think a limit of 10 is too high. 10 is still a large number. In the final analysis, it's just too much set-up to counter only a couple of possible strategies. No more than your average 3.