Who Are Congo Bill and Congorilla?

Who's This? A great white hunter/golden gorilla combo. 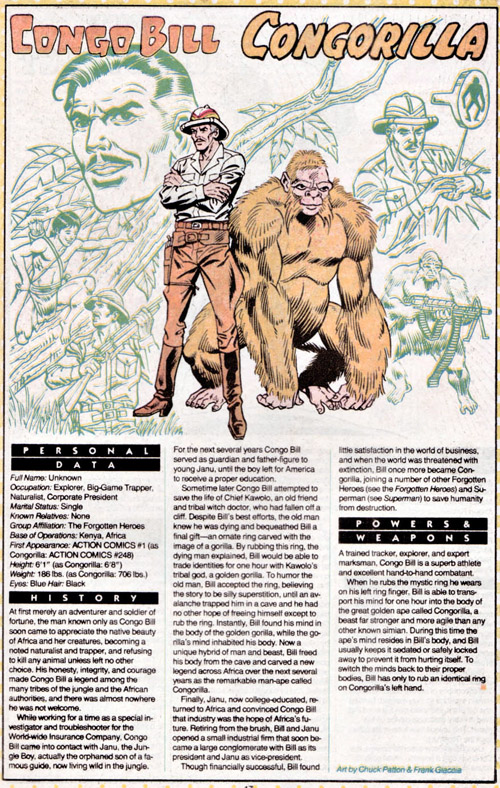 The facts: Congo Bill was a long-running adventure strip in the Jungle Jim mold, starting way back in More Fun Comics #56 (June 1940), NOT as Who's Who mistakenly says, Action Comics #1. He did move into Action as of issue #37, where he stayed until issue - get this! - #261 (February 1960), an impressive continuous 20-year career, which also included a movie serial. Of course he eventually had to change with the times. The introduction of a sidekick (Janu) was soon followed by a 7-issue solo series, but true revitalization only came when he gained the ability to mentally trade places with the mythical golden gorilla known as Congorilla. The beast had been introduced in Action #224, but the strip was only transformed in Action #248 (January 1959). If you do the math you'll see Bill's days were numbered regardless. Bill and his ape counterpart had to settle for irregular appearances after that, so few that he/they were made members of the Forgotten Heroes in the 80s. In 1992, Congorilla was given a mini-series, and Bill himself another in 1999 under the Vertigo imprint.
How you could have heard of him: In 2009, James Robinson's notoriously ill-received Justice League: Cry for Justice included Congorilla in a JLA roster, which spun-out into a Starman/Congorilla special in few years later. Rebirth had Congo Bill training Damage on Monster Rock. I'm sure those words, in that order, mean something to someone.
Example story: Action Comics #252 (May 1959) "Congo Bill Dies at Dawn!" by Robert Bernstein and Howard Sherman 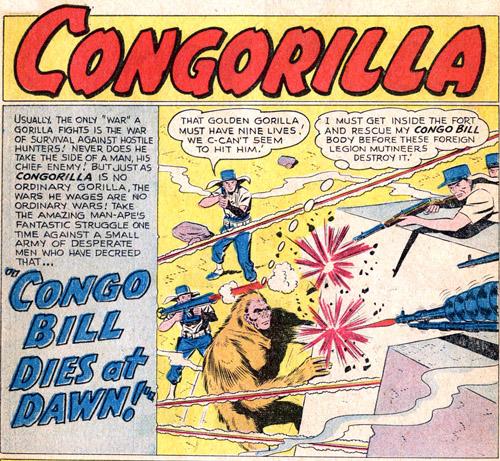 A story from the Congorilla era published in a pretty famous issue of Action (Supergirl's first appearance), "Congo Bill Dies at Dawn" has the original star in the title so should be good for our purposes. Despite his name, Bill's adventures span a continent, which might be irksome if we weren't also talking about an era of DC Comics when Metropolis, Gotham, etc. had waterfronts, but also a nearby swamp, forest, and desert. So in this one, Bill is leading a caravan through what appears to be the Sahara, specifically the North Africa regions, looking for "the ruins of El Basur" (as a colonial era hero, he of course makes robbing Africa's treasures sound heroic). The group stops at an oasis by a Foreign Legion fort, but... someone's drugged the waterhole! 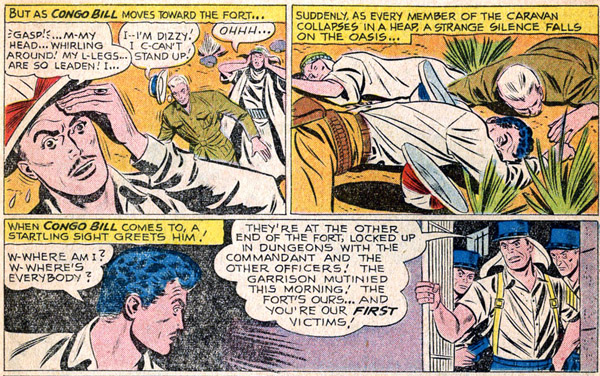 These mutineers are abominably stupid to poison an oasis in the middle of the desert, but it's nothing compared to their plan to turn the fort into a tourist trap (how?!) so they can continually raid caravans (how long's THAT gonna be viable?) and to prevent Bill etc. from telling anyone, he'll be executed at dawn. The situation forces him to rub his ring (not a euphemism) and switch minds with the golden gorilla - IF he's in range! 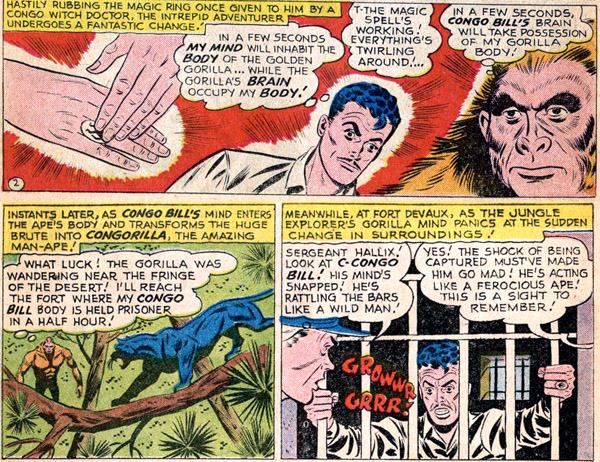 He is! But you see what I mean about Africa's geography being collapsed into a near-singularity. No way those two landscapes are anywhere close together even if he's "near the fringe of the desert". Must be one fast-walking gorilla to get there "soon after". Be that as it may, Bill-in-Congorilla must rescue his body before it starts flinging feces and gets executed a little early. Good thing Congorilla is super-strong.

Then, the soldiers start firing bazookas at him and he has to take cover. Meanwhile, one of the mutineers actually loyal to his commandant uses the confusion to grab a motorcycle and head to HQ to get reinforcements. Except the mutineers took out the bridge leading in that direction. Not a problem for Congorilla!

Imagine being Caporal Gabin and having to tell this story for the rest of your life. By the time Congorilla gets up, he's caught in crossfire and has to improvise with the tools a hand - barrels of tar! 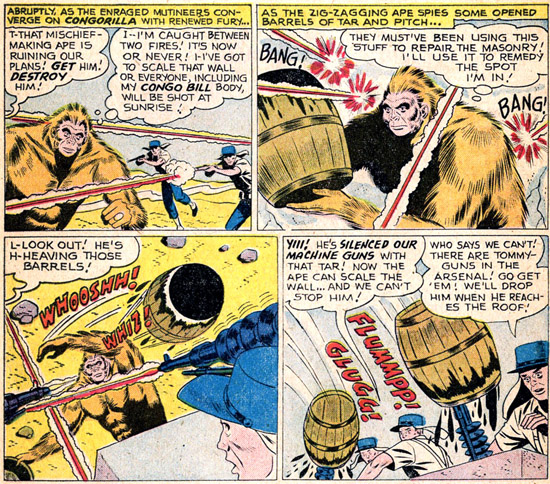 The diversion allows him to reach the roof where he grabs some cannon balls and starts bowling them at the bad guys.

He then frees everyone, rubs the ring (still not a euphemism) and "Bill" returns to his senses. As is usual in these strips, the ape then shambles back into the jungle  as the supporting cast wonders just what the heck happened.

While a strip like Congo Bill was already dated and getting more and more so as society advanced, the addition of Congorilla, while memorable, turns it into a limited superhero strip whose only vague interest is that it's set in Africa. If Congorilla were set in America like the rest of DC's line, it would not have the depth necessary to sustain continued publication. Freaky Friday meets the Hulk (prefiguring both, I know). And so Bill wouldn't have long to suffer in the sweltering sun under all that fur.

Who's Next? An evil broadcast.
Comics Silver Age Who's This?

Bill said…
I thought for sure there'd be a 'Donkey Kong' reference wrt using barrels to dispose of your enemies... (or was that too on the nose)