Category: ST DS9
Last article published: 8 November 2009
This is the 9th post under this label 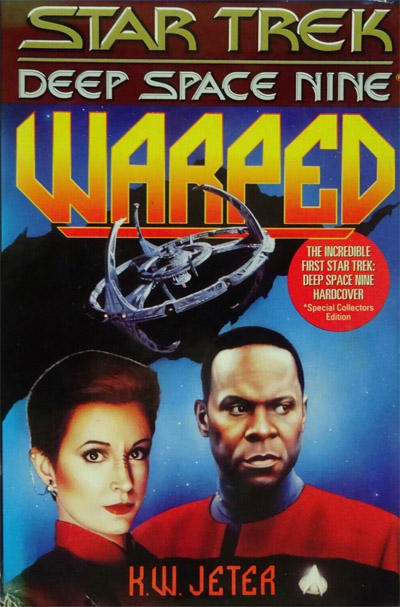 STARDATE: Unknown (between Battle Lines and The Homecoming)

PLOT: A spate of murders aboard Deep Space Nine leads the crew to discover all the perpetrators had gone to new, out-of-the-way holosuites equipped with banned technology that got right into their minds. Meanwhile, a new political party on Bajor successfully stages a coup and replaces the Provisional Government. These events are connected through McHogue, an old "business" partner of Quark's who is creating a "dark universe" in subspace, a universe of the mind built on the dark impulses of all the people who have gone into his holosuites. Thankfully, Jake's dark experiences there haven't yet started to brainwash him. Now as a Bajor's new Minister of Trade, he is set to build a Bajoran Vegas where all those dark impulses are catered to, turning the fabricated city into a subspace black hole that extends his mental influence and threatens to shatter the universe on which subspace rests - ours. Dax figures much of this out and is captured by McHogue for her trouble, so Sisko flies to Bajor, through subspace anomalies and Bajoran hurricanes, to rescue her. In his final, hallucinatory confrontation with McHogue, he uses the fact that a part of him in the Wormhole (with the Prophets) to take control of the dark world, leaving McHogue there alone forever. (Interpretations mine.)

CONTINUITY: Sisko and Kira have to deal with Kai Opaka's departure and her belongings. Jake revisits the fishing holoprogram from "Emissary", only now it's darker.

DIVERGENCES: Characters take the lift to the Ops "entrance", but that thing doesn't have any doors, nor a vestibule. But aside from a few quirks of dialog, the real anomaly is that we have YET ANOTHER coup by YET ANOTHER faction set in Deep Space Nine's first year, all before The Circle trilogy. I think this is the third DS9 novel to do this, including Jeter's own Bloodletter. 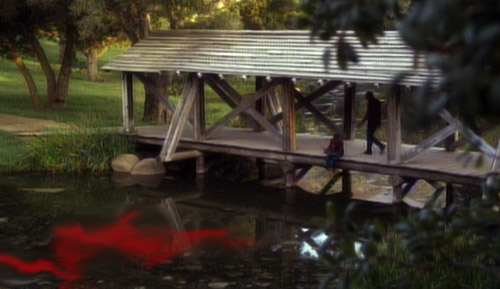 REVIEW: Some writers attempting the early Deep Space Nine novels struggled, I think, with finding new types of stories to tell. While Jeter's very early Bloodletter was quite good, he returns to the same well in Warped, and it's a well that others had dipped into since. Another spate of murders for Odo to investigate. Another Bajoran faction making waves on Bajor. The characters are mostly well-written (I like the Siskos making a stand about where their home is, and Jadzia's disconnection from the symbiont is interesting) and everyone in the cast gets something to do, but it's surprising that this for the most part generic DS9 tale was earmarked for hardcover treatment (other than the writer being a respected name from non-licensed SF). The intriguing idea at the heart of the book - subliminal technology that psychologically transforms holosuite users - is taken into metaphysical territory in the third act in an effort to make the story more epic (the fabric of the universe could collapse), but it's an unconvincing result of the core premise. Again and again, throughout the third act, explanations are repeated for the reader, in various levels of technobabble, but I'm not sure it ever really makes sense. Things get lost in the phantasmagoria - the trope of filling SF stories with nightmarish hallucinations is one that really displeases me - and Sisko's solution is given short shrift indeed. It also leaves a number of plot threads dangling, or at least underdeveloped - the Kai's last will and testament, the Cardassians' involvement, and most of all, just how did McHogue go from petty crook to God of His Own Reality? So though it was pretty standard, the mystery had me in the first couple hundred pages, but the finale lost me in redundant exposition and confusing visuals.
ST novels: DS9 Star Trek

Answering Judaism said…
It was quite a book. I did enjoy it a fair bit though certainly it is a bit too wordy on Technobabble. The average reader might not understand it and the Trek fans definitely would find it hard to follow.

It is fantasy based to a point and McHogue was a fascinating character though the ending is still a bit confusing.

It’s also very horror like in the third act when Sisko enters McHogue’s world. Just the story was a fascinating look at an advanced holosuite.

I still respect your opinion, after all I am aware this book has scathing reviews online.
August 17, 2022 at 4:50 PM

Siskoid said…
I'm sure the book has its fans. I worked for me until it didn't. I much preferred Bloodletter by the same author.
August 17, 2022 at 4:56 PM