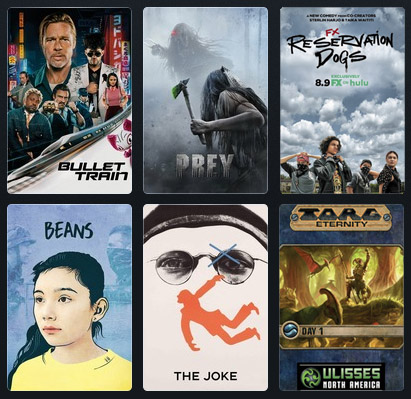 I was impressed and intrigued enough about Bullet Train the movie (see below), that I bought Kotaro Isaka's original novel. And with my Torg Eternity game going full bore and players chipping in, I snatched up the 4 Cosm Sourcebooks I was missing (leaving only the one that's not out yet for future purchase).

In theaters: Based on a Japanese novel I immediately ordered because I'm too curious, Bullet Train is a wild and entertaining ride about a Tokyo-Kyoto train with various assassins pit against one another (and now I'm trying to hack the Tokaido board game to make the game's trip less relaxing). Brad Pitt plays the lead operative, a burnout trying to apply what he learned in therapy to the situation, but talking about the cast any more than that would be a spoiler. In fact, i recommend not checking out a cast list since finding out who's in it is part of the fun. Director David Leitch (Deadpool 2, Atomic Blonde) uses the novel's structure efficiently, creating little movies within the movie, without losing the film's "high-octane Agatha Christie" momentum, and stages a number of fun close-quarters battles inside the train. This is a cool, stylish, neon-drenched, neatly soundtracked action comedy filled with memorable characters and moments, and I don't know why a subset of cinephilia hated it. Me? It's totally my jam, and I'm gonna read the s#!& out of the novel when it gets here.

At home: When I say Prey is the best Predator movie, I say it without the nostalgia normally attached to the original. Many will say "best since the original". Despite originating the creature (which will always make it relevant), I find its 'roided-out gunplay not all that interesting. Now put the monster in gorgeous locations in 18th-Century America, going up against Comanche hunters using not much more than Stone Age tools, and you've got my interest, because while a "slasher" in which all the victims are action heroes is interesting, but the technological gap in Prey feels much more desperate. Amber Midthunder is great as a young woman who wants to be a hunter despite her culture's expectations, but she's smarter than most of her tribe, so she has a chance. French trappers (some with abominable accents, I'm afraid) act a secondary villain/cannon fodder, and really give a sense of a land being encroached upon, not just by the Predator, but uncapitalized predators as well. Tender hearts might want to be warned that there is some violence to (CG) animals, but aside from the ugly colonials, there a many characters you actively cheer on and hope for their survival. It's still a Predator film, so some of it is a little predictable, but there's just enough a twist to keep things interesting. I think they hit on a way to rehabilitate this long-suffering franchise and it's to dispense with the machine guns and put the creature up against historical warriors - samurai, maybe, or Boxer Rebellion fighters, Viking, Roman legionaries, what have you.

After a single season, I really fell in love with Reservation Dogs, a Tailka Waititi production about a group of young Native Americans dreaming of leaving the "rez" in Oklahoma for fabled California, but the first season asks if they could, or even should. In only 8 episodes, their world is efficiently drawn, with plenty of characters to get attached to, and for several, an interior life that sometimes goes beyond the psychological into the mystical. This is a world where you might well speak to the spirits of your ancestors. The show is not afraid to split up the leads and spotlight any one of them, nor of spinning the amusing comedy into heart-wrenching drama. I noticed a lot of Canadian actors, but it IS shot in Oklahoma, and uses a lot of local talent, so it feels authentic. The second season is on right now, and I can't wait it to catch up with it and see what happens next. Or what doesn't. A lazy day with these characters faffing about is just as entertaining as their efforts to reach their El Dorado.

I remember the Oka Crisis pretty well. In 1990, I had just started on a journalism degree, and it was all over the news. White folk trying to encroach on Mohawk territory (including a graveyard) to build a golf course (of all things) out somewhere in Quebec (I was never good at Quebec geography, even though I lived near its border). A peaceful demonstration gone wrong. The reservation's residents dubbed domestic terrorists. Massive shows of racism ensue. I don't think the Whites acting like victims were fooling anyone even then. Reliving these events through Tracey Deer's Beans (the main character's nicknames, but I suppose it's also a pun about the stakes) was kind of harrowing, a condensed chronicle of injustice that nevertheless is only background for Beans' coming of age story. Here we have a 12-year-old Native girl who's growing up and acting out as any normal child might, and I appreciate the naturalism of those scenes even though it's nothing we've never seen before, at least in the broad details. A bit sappy, a bit melodramatic (well, have you ever gone through puberty?)... But what sets it above the usual material is the context. How she spends this crucial time isolated and barricaded, how it sparks radicalization (which can be negative or positive, depending on Beans' choices) or disaffection, and indeed, just when you think the White mob might be exaggerated for movie reasons, here comes the actual news footage to show it is not. We Canadians love to point at our Southern border and condemn what's happening there, but we have our own bigots and ugly reactionaries. Canada, like most places, is a glass house. The cast includes a couple of the kids from Reservation Dogs.

Based on Kundera's novel, The Joke uses intriguing editing to recreate the lead's internal life, slipping us in and out of flashbacks as if the past and the present cohabitate, which for a man obsessed with getting his revenge for past misdeeds, makes a lot of sense. Kundera is a very internal writer and this a good way to present his work, even though the book itself is, in terms of structure, is much more linear. Ludvik makes a flippant political comment to a lover on a postcard and is expelled from the Party, and therefore, his life ambitions. Years later, he gets the chance at revenge by sleeping with his accuser's wife, but as you might imagine, the victory will be pretty hollow. It's a satire about a regime most of us have never lived under, but the rise of fascism has given us a taste. We certainly recognize the fragile totalitarianism that brooks no dissent and can't take a joke, the self-sabotage that occurs on a social level, and embedded a little deeper, the generational disconnect to tradition these alt-realities create (which justifies the use of folklore in the film and book). I get it, but it also felt at a certain remove from me compared to other examples of the Czech New Wave I've seen. RPGs: With Act 3 of the first Torg Eternity adventure dubbed Day One, our heroes finally get out of the Living Land and into the safety of Philadelphia, and there they will rest. This is a series of one-shots meant to introduce the rules and the Cosms one by one, and all take place on the same day, so whether Pout and Bébert ever want to return to Wade and his caveman father Kol is up to them (and unlikely, but they make fine background NPCs, and I like how the players thought of the cast as their "tribe"). The main rule introduced in this chapter was Torg's unique Dramatic Skill Resolution system, which uses the Drama Deck to pace multi-part actions when there's a ticking clock involved. This can play out various ways, but generally, you have to do complete 4 tasks in order, can suffer setbacks, etc. It works reasonably well, though the GM has to be careful not to railroad the characters too much. For example, in this adventure, the DSR is about traversing a darkened Holland Tunnel filled with pitfalls and giant carnivorous plants, and since it's dark in there, the players don't know the four steps in advance (which made it a bit wonky). The fourth step is making the roof collapse so that the tunnel floods and destroys the oncoming army, but while other obstacles pretty clearly had to be overcome (find your way in the dark, push a car out of the way, rally the scared refugees), this was a ploy that the players should have thought of themselves instead of having me hang a huge sign over it so that they get the hint. I will try to design my own DSR differently, and if I encounter it in a published product, just let the players do or not do what they want, even if it kills them, i.e. give them more control over what that particular step entails. But we're learning and this was a training wheels sequence. Otherwise, I felt the players are getting quite good at interpreting what cards mean to their actions, and narrating the fights much more. Pout (Wade) has hacked the system, I feel, juggling resources to go for broke and achieve high-octane effects and managing the risk to his character. Beb is more timid (though in the opening chapter, HE was the one jumping into danger without a second thought - maybe it depends on the mood). After all, character death in a one-shot doesn't mean much, and I had replacement PCs seeded into the background if it happened too soon. But even in these circumstances, you get attached, y'know?
Best bits: Wade's killing blow on the villain was accomplished thanks to a wild series of exploding dice (in Torg if you roll 10, 20 or 6 on a d6, you roll again and add the totals), after blowing all his cards to absolutely destroy the henchmen the round before. But in terms of character decisions, who doesn't love a caveman jumping on the back of a triceratops and using it as a mount for the length of an adventure.
Geekly roundup Play RPGs

The heavy clues on needing to collapse the tunnel weren't as necessary as you think. I did think about it (and I'm sure Beb did too) but a few things made me keep it as a last option:

1 - you had hinted that it was a dangerous option when we first got to the plant
2 - it felt like it might have been a "sacrifice your character's life to resolve this problem" situation (after all, how does one survive being in the Holland tunnel as it collapses?) and I was trying to find a way to keep Wade alive
3- the drama deck didn't let us resolve the situation yet anyway
4- it was way too fun picking off Eidinos from the back of a triceratops while I wait for the drama deck to give me permission to resolve the scene.

Fred Melanson said…
It kinda pisses me off that they hired an actor from Quebec to play the main french Canadian in prey, but they went out of their way to hire an anglophone Quebec actor... I love Mike Patterson, he's a really nice and funny man, but they could've tried just a smidge harder and gotten it right.

I watched Beans too, cuz my dad worked the Oka crisis and I always got a very one sided verion of what had happened. It was nice to get the perspective (even a fictionalized version) of someone from that community.
August 14, 2022 at 12:00 PM