What a Card: Commander Charvanek

Being a look back at cards from the Star Trek CCG, and what I thought of them back when they were fresh and new... in EPISODE order. Ah yes, the star of The Enterprise Incident... 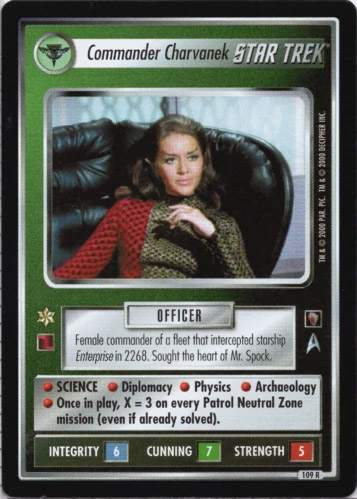 PICTURE: A very nice card aside from slight blurring, the Commander is professional and in uniform, but feminine and alluring. Her two natures were built (sown) into her costume, with its two halves, and I like the plush but more sober (colorwise) set design. A strong and original pose too. A very good 4.3. (Those do look like outside windows in the back though.)

LORE: Formerly known as the female Romulan Commander to differentiate her with the Romulan Commander from "Balance of Terror". Giving him the pseudonym "Keras" worked fine (even a little Easter Egg in there), but this character had an unknown but "rare and beautiful" name. Does "Chervanek" live up to that? Well, sure, why not? It's exotic enough, and let's not forget Spock was spreading it a bit thick. It's actually pulled from a Star Trek novel (Vulcan's Forge) which opens up a dangerous can of worms, I bet. As for the lore, there's a poetic element to her "seduction" of Spock, but it's too abridged for my tastes. All of that spells a 2.9.

TREK SENSE: She's the equivalent of a Captain (Command/Officer), but they didn't bother giving her Leadership. Why not? I think a large point made by the episode was that women could hold that kind of authority, that she was a strong enough woman. Her Diplomatic skills were evident in her negotiations with Spock. Physics may be due to her use of a cloaking device, though we have no proof she knew that much about it. Archaeology is even more marginal, since it appears to be based on her knowledge of Romulans' cousinship to Vulcans. Well, that knowledge apparently didn't include the fact that the Vulcans had no Death Grip, but then again, that may be a function of Anthropology. In any case, Archaeology is far from proven. Science was likewise not proven, and seems to be supporting her already flimsy Physics and Archaeology. The designers may also have tried to give her something in common with Spock. Missing? How about Honor? The special skill is interesting - it sets the variable mission points on Patrol Neutral Zone. This was her mission, of course, and in those days, you couldn't go very far abroad. If you were patrolling one sector (one mission location), you stayed in that sector. That means that each such sector should have its own mission points independent of the proximity of other Neutral Zone sectors. The "once in play" mechanic doesn't quite work however (especially in its retroactivity) because it makes the Neutral Zone truly dependent on her simply being in play. Even if not in the Neutral Zone. Even if she's dead. Even if faster modern ships are attempting the mission. It destroys the justification that makes the skill work. I'll buy the attributes however. Integrity is high enough (she was honorable), but not too high (she tried to make Spock defect). Cunning is good enough to command a vessel, but not to enough not to get tricked by a handsome Vulcan. Strength is the female high for TOS personnel (what can I say? They made a ship commander wear a mini-skirt). Lots of problems with the skill list, I'm afraid. Just a 2.4 despite some effort put into the special skill.

STOCKABILITY: OS Romulans are a little less playable than Feds or Klingons since they have fewer available personnel (will have to depend on a lot more non-OS Romulans) and can't use the Organian Peace Treaty, but they make fine support personnel for regular Romulan decks. Charvanek doesn't even have to start in the past. Simply Spacedoor her universal Battle Cruiser and download her via Ready Room Door. She's matching commander so could make the ship more competitive at up to 8-8-8. You can then keep the ship staffed with AU personnel from Crew Reassignment and/or that OS personnel download. From there, Charvanek can put her skills to work for the Star Empire. She has a dual-classification, with both OFFICER and the useful SCIENCE. She has Archaeology which fits in real well with Romulan planet strategies, and Physics which does the same in space efforts. Add Diplomacy for a variety of uses, and even Firestorm-immune INTEGRITY. As for her special skill, it's a kind of counter for PNZ strategies which use half a dozen PNZ locations, boosting each mission's points to (at least) 60, then solving them with a simple unopposed ship. Too easy, right? Well, Charvanek makes mission attempt time longer by making sure those missions are worth only 30 points. Against cheesy players who habitually do this kind of thing, you might Tent her and play her at some point (if not playing Romulans, there are various options open to you, from Neutral Outposts to Devidian Doors). The effect is continuing (even if she dies or is reprogrammed) AND retroactive (so even if you get her into play after the first 60-pointer was scored). For yourself, the only thing you'll get out of it is if you play one or two PNZs (less than 3), so their points would get a boost, but be no harder than usual. With fewer missions in the Neutral Zone, there's less of a chance of being opposed there too. Strong enough for a 3.9.