Being a look back at cards from the Star Trek CCG, and what I thought of them back when they were fresh and new... in EPISODE order. The Enterprise Incident was also a good source of Romulan extras... 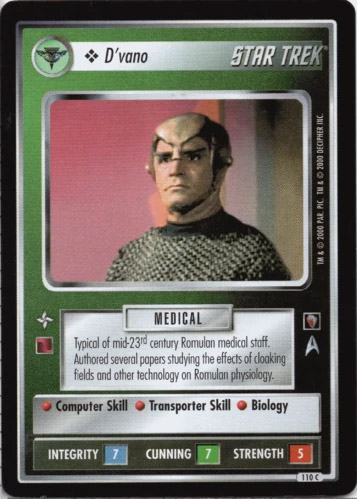 PICTURE: A lot of blurring on this guy, and what we would call in French "nanane" colors. Note that some good CGI work was done nonetheless as Mr. Spock used to be in the foreground. It does seem to leave a lot of blank space on the card, but we get a pretty good viewing of an OS Romulan guard's uniform. A 3.2.

LORE: Universality is acknowledged, and then there's a whole lot of invention in order to make this guy Medical rather than a security guard. But you can't fool me, I saw "The Enterprise Incident". He's got an interesting science project though, I'll give him that, reminiscent of the ones created for those Premiere Klingons way back when. A 3.3.

TREK SENSE: As stated above, this guy was quite clearly Security. He escorted Kirk and Spock to Romulan Commander, wears a shock helmet and chain mail and everything. Even if we buy the back story, and take him as a Medical, the skills aren't spot on. Biology's fair enough, and anyone could have Computer Skill (has to write his "papers" on a word processor), but what's the Transporter Skill doing here? Was he the one to beam Kirk and Spock over before escorting them to the Commander? I seem to recall Mr. Kyle doing that. Perhaps it's that "other technology" that affects biological systems. Yeah, ok. In any case, the stuff about cloaking device effects should have rated Physics instead/also. The high Integrity is normal on OS Romulans, back when they had more honor than Klingons, and the other attributes are fine as long as you buy the Medical history. Problem is, I don't really. A 1.8.

STOCKABILITY: One skill too many for him to be a support personnel, D'vano nonetheless has some appeal, especially when you want to play an OS deck using the Romulans. That's rare because of the small number of OS Rommies and their lacking any kind of OS-specific Treaty, but they each have their particular skill niche, and you couldn't do without his mix. He's the only one with either MEDICAL, Biology or Transporter Skill, and one of only a few with those skills in the OS world, period. There aren't that many Romulan MEDICAL personnel on the whole, so he'll even find his way into a "present day" deck, helping out with his Aphasia-curing Biology, pretty rare Transporter Skill and common but useful Computer Skill. He can add to those skills with a Classic Medical Tricorder in any case, and has a lot of skills for a universal that can be downloaded by either of the OS Romulan ships (in fact the best of the personnel that can). Tightly focused as a mission attempt specialist, with uncharacteristically low STRENGTH... it's a 3.6.