Being a look back at cards from the Star Trek CCG, and what I thought of them back when they were fresh and new... in EPISODE order. And ANOTHER Romulan extra... 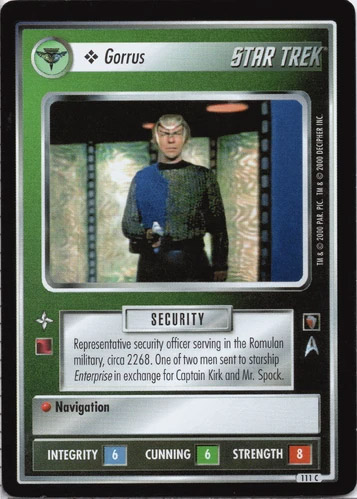 PICTURE: Just a somewhat blurry guy on a transporter pad, sure, but Decipher did a good job of removing the other security guard that was next to him. The dead-on pose doesn't hurt either, giving Gorrus some solidity, and aside from the wasted blue space on the right, the background's not too routine. Builds itself up to a 3.

LORE: Pretty dry, but it does an adequate job of mentioning universality and contextualizing the character. Not too interesting, but then again, the character wasn't either. Another 3.

TREK SENSE: A Romulan guard from "The Enterprise Incident", I'm at a loss to explain how he could be a Navigation mission specialist. Security, no problem. But Navigation isn't a skill associated with Security, and furthermore, there's nothing in the episode or lore to explain it. Possible, sure, but so are a lot of things, which doesn't make them fact. Integrity vacillates between Romulan villainy and loyalty to the Empire. Cunning's on the low side, but all the guy did on the show was stand there stupidly when he got switched for Kirk or Spock. Strength is high, but that's a Romulan trait. That, and he's holding a disruptor in the pic, which is a show of force in and of itself. So, good attributes and all, but I just can't support the single skill. A 2 this time.

STOCKABILITY: Navigation is an important skill, but extremely common. Does that hurt this little mission specialist? Well, not too much, and for a number of reasons. It's not that he's the only OS Romulan source of Navigation because that micro-affiliation is just too small to sustain a deck. Still, it helps that he's SECURITY, because the classification gets increasingly more exposure with time. As a mission specialist, he can be brought into play on the first turn, which could be helpful in protecting your interests (with Homefront, for example). It might be a matter of which skill you like the best, his, Mopak's or Tagus'. With his high STRENGTH, he'll be good in a fight, especially if Lower Decks is in play. For mission specialist points, Navigation may not come into play as often as Treachery, but it is, as I mentioned, a pretty common requirement. The Romulans can use him at more than a dozen missions, some of which, like Intelligence Operation, Investigate Coup and Investigate Rumors, also require SECURITY. The OS icon adds a little bonus, allowing him to use OS equipment and download to OS ships. Better than your average mission specialist at 3.6.