Who Are the Council?

Who's This? A shadowy organization. 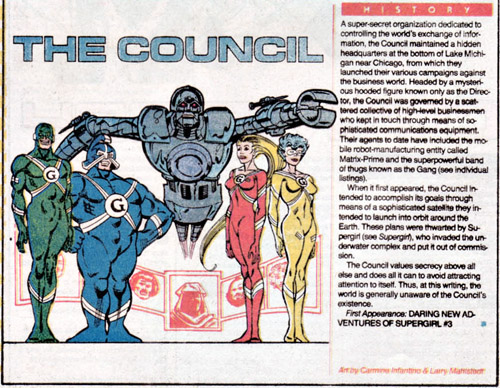 The facts: Not to be confused with the Council that opposed Paul Kirk - Manhunter - or the Council that opposed Nemesis, the third by that name is an organization dedicated to controlling the world's exchange of information and opposed by Supergirl from its lair at the bottom of Lake Michigan. I really dislike this entry because 1) Cosmic King should have had a bigger entry on that page and 2) showcasing Matrix-Prime and the Gang in the art, both of whom get their own entries, is wrong-headed. Yes, those were agents of the Council, but the Council itself, if it even deserves an entry, is a bunch of people in suits and henchmen in JUMPsuits, headed by the hooded Chairman (who the entry calls the Director). The actual Council gets a bit of surprint, covered by the color figures. Anyway, the Council appeared in 5 issues of The Daring New Adventures of Supergirl between issues 6 and 12, and that's it.
How you could have heard of them: I dunno. Psychic powers?
Example story: The Daring New Adventures of Supergirl #7 (May 1983) "This Meeting Will Come to Disorder!" by Paul Kupperberg, Carmine Infantino and Bob Oksner 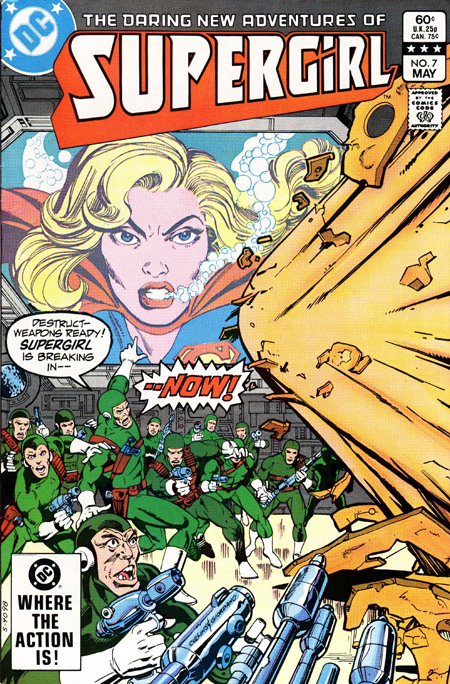 I said exactly one interesting thing about the Council above, and it's the Lake Michigan HQ. Let's dive right into that. 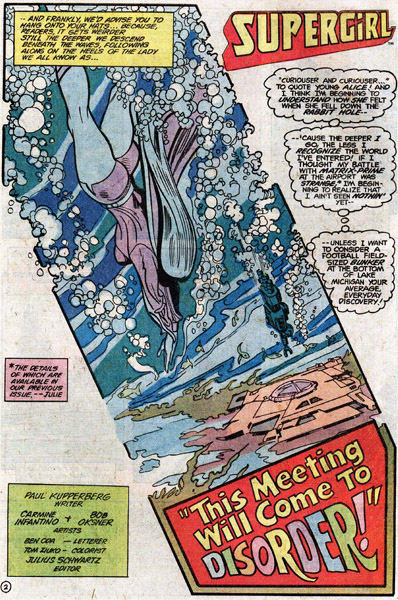 Though the skyline looks closer than that to me (never trust Carmine Infantino's city perspectives - see: The Flash), the base is situated some 50 miles from Chicago, and some 900 feet under water (Kupperberg did his research, that is the correct depth). It is about the size of a football field, lead-lined (because there's a Kryptonian in the story) and has a nice skylight so you can look at the most polluted Great Lake's murky waters. Oooh, look at those 10 million pounds of plastic dumped over the last year! Oh and as for ease of entry, it all depends on whether the hero cares about you drowning. 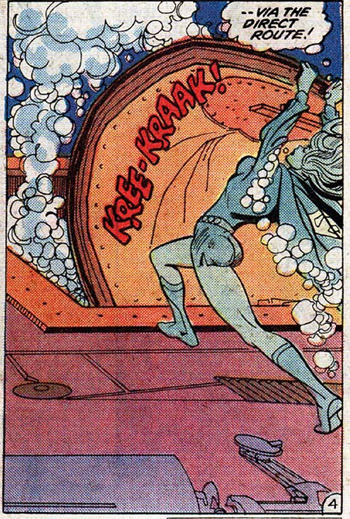 She eventually stops the leak, but those henchmen probably thought they were done for. Or not, because automated pumps start draining the water almost immediately. The Council didn't go into underwater real estate blindly. Not that very many of them are ON the base. Zoom calls are more their thing. 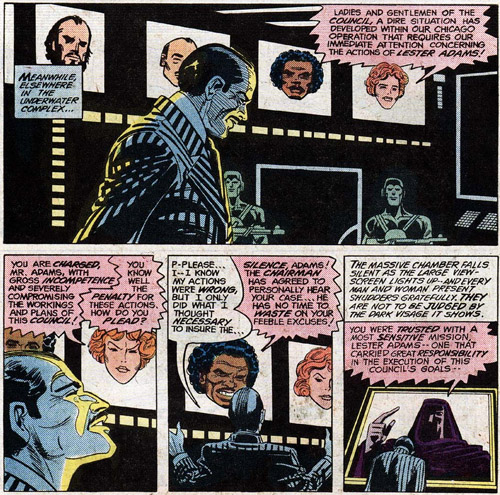 The Council is meeting now to decide the fate of their Chicago office director, Lester Adams, who was supposed to help assemble the pieces of a communications satellite as part of the Council's plan to control the world's exchange of information (TM), but employed the Gang and Matrix-Prime, colorful agents that drew attention to the shadowing organization, specifically, Supergirl's. He is executed for his faux-pas.

Meanwhile, Supergirl makes short work of the green-clad guards, but has a brief encounter with the Council's super-powered agents that prevents her from getting to the Council chamber in time to stop Project Skyeye from being launched off-site. 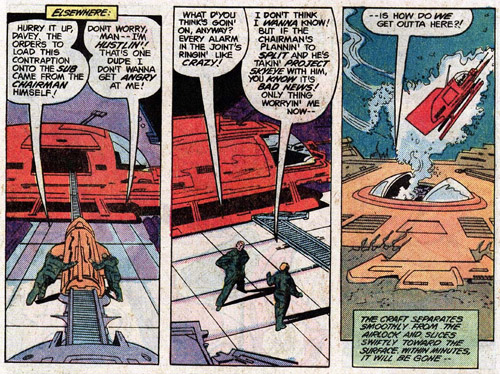 All Supergirl finds is Lester Adams' dead body, and she only recognizes him because someone called Johnny Ostrander (*raising eyebrow*) gave her a description. Shadowy, shadowy!

But of course, organizations like the Council are a dime a dozen in comics (just the fact that THIS Council is the third by THAT NAME in the DCU ALONE says something). I think they were also in Captain America: The Winter Soldier. So it kind of HAS to be about their cronies, or perhaps some interesting gimmick like the underwater base. So it must really hurt when a superhero or the authorities discover your secret HQ and you have to abandon it. How much did that place COST? Supergirl might as well have let the waters rush all the way in...

Who's Next? A tipsy aristocrat.

Comics Supergirl Who's This?