Who's This? An adult Legion villain. 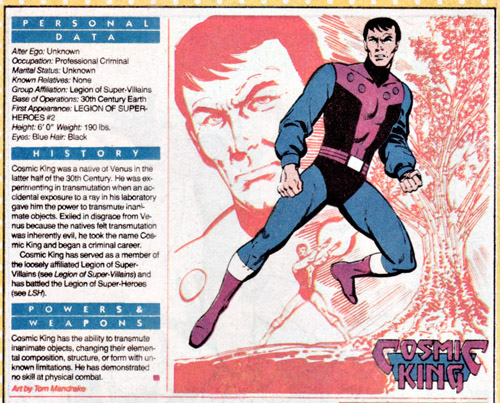 The facts: As a member of the original Legion of Super-Villains, though chronologically a later version, Cosmic King is analogous to Cosmic Boy in name and general appearance only. Instead of magnetic powers, he can transform matter (but isn't from Trom like Element Lad). This LSV fought the so-called Adult Legion that tended to interact with Superman in the Silver Age, while the younger versions we know best interacted with SuperBOY and Supergirl. When a bigger LSV formed in the 1980s, Cosmic King was a (very) minor member of the group, which is all the entry here seems to care about (the same happens to Lightning Lord, but the LSV and Saturn Queen entries do mention the adult LSV).
How you could have heard of him: Alan Moore being who he is, you may have seen Cosmic King's adult LSV appear in "Whatever Happened to the Man of Tomorrow?". His most recent appearance was in the Retroboot era, a story we're about to get into.
Example story: Adventure Comics #529 (October 2011) "The End" by Paul Levitz, Geraldo Borges and Marlo Alquiza 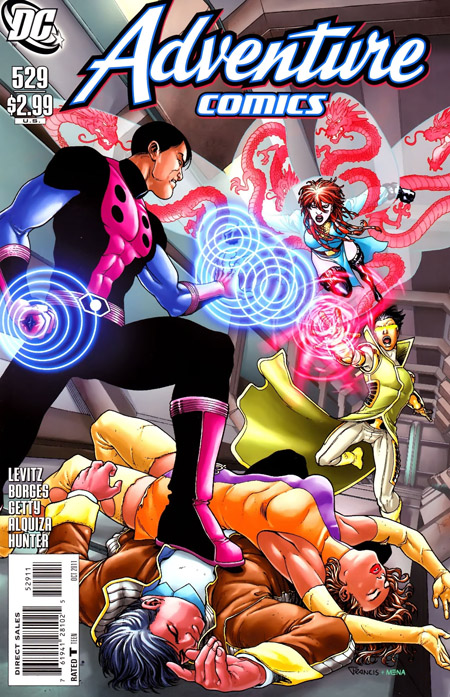 At the end of the previous issue, Cosmic King had attacked Legion HQ and now stands over Night Girl, Duo Damsel and Bouncing Boy's prone bodies gloating about how it's a waste of his abilities to kill such pitiful Legionnaires. Chuck's students certainly won't stand for it. Comet Queen is first at bat, resulting in a sequence that isn't exactly clear on CK's powers. 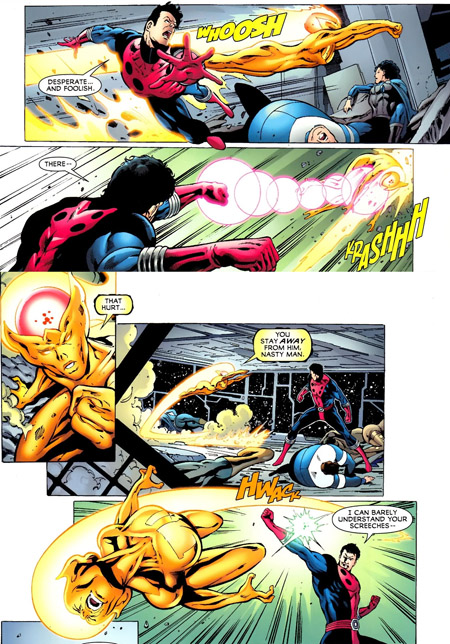 I'm sure transmutation can be used to ignite the air or whatever, but there's no obvious explanation. And he's also an able fighter, but the punch looks superhuman. He keep Chemical Kid and Dragonwing busy, then downs a Legion transport holding more Academy reinforcements. When we go back into Legion HQ to see what's happening, Chemical Kid is busy dealing with a radioactive element: 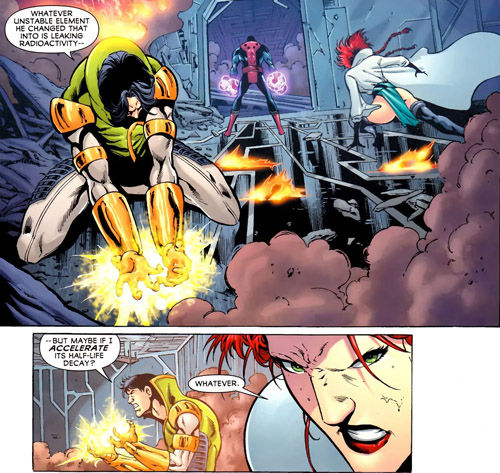 A terrifying use of transmutation, you'll agree. And Dragonwing gets... snuffed out. 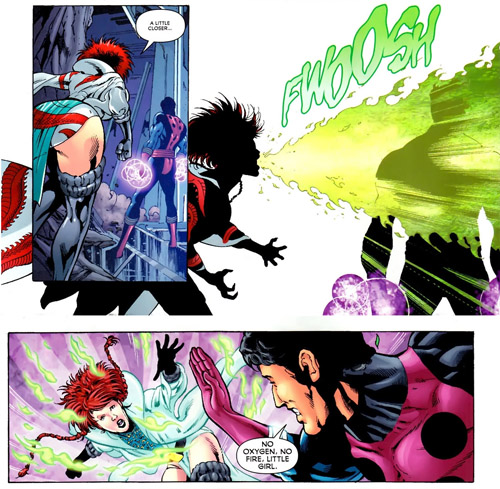 She keeps fighting, but it doesn't take long for Cosmic King to smother her in mercury flooring. THEN the reinforcements arrive: Gravity Kid, Glorith (the younger) and Variable Lad (who randomly rolls abilities and physical characteristics with each use of power). Out of frustration, CK starts throwing diamond shards around. 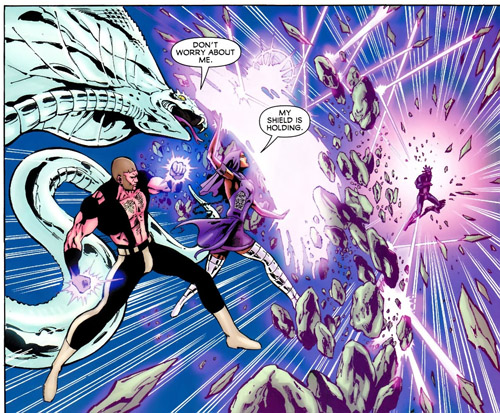 They survive the onslaught, but can they withstand his last gambit? 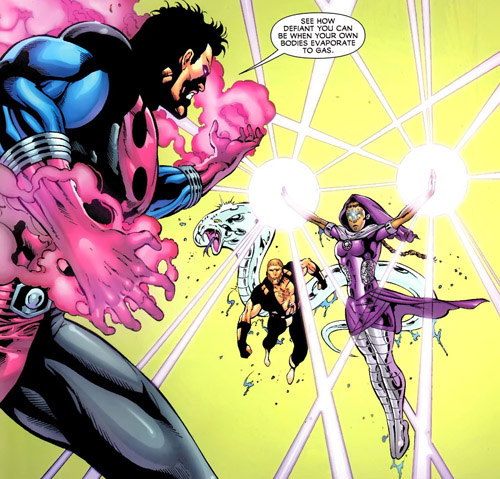 I mean... if he can just evaporate people, why isn't this is first and only attack? From the looks of it, it's a slow process, so maybe that's why. Variable Lad (shape of: a big silver snake!) has time to react and defend his friends by jumping on Cosmic King as his flesh is vaporized away. 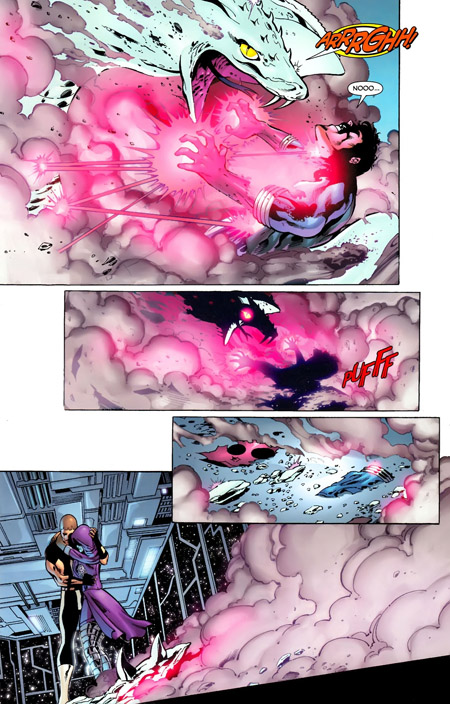 Are we to understand that Variable Lad's silvery sheen acts like a mirror, bouncing CK's powers back at him? And that the villain isn't immune to his own powers? Like a lot of this story, though dynamic and nice to look at, it's hard to understand just what is happening under all the special effects. But while the Legion has its own transmuter in Element Lad, and the modern DCU has given Firestorm a series, showing that this power set, while complex, CAN be clear and straightforward, CK isn't afforded that chance here.

Transmuters are often nerfed so that they can't affect organic matter (for example), but when villains AREN'T, it makes them way too powerful and dangerous, and therefore must be used sparingly. In this case, his lower-powered decisions at the start of the fight are also less than convincing. No matter, I guess, because (and I hadn't remembered this going in) he is killed in the issue, taking Variable Lad with him (or vice-versa). I guess this really is "The End". For Adventure Comics, for Variable Lad, for Cosmic King, but also for the whole Adult Legion timeline!

Who's Next? A shadowy organization.

Comics Legion Who's This?