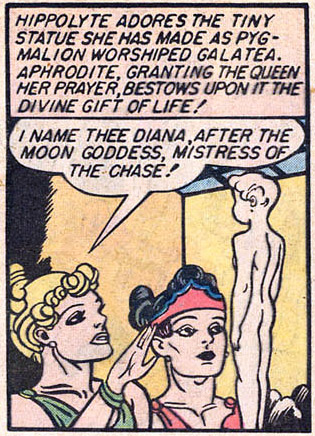 As we start perusing the stands of July 1942, we notice one new series from the future DC Comics. Wonder Woman getting her own solo quarterly is really no surprise after the success of her strip in Sensation, but it's still a landmark for female heroes. While her origin had been told in All-Star Comics #8, the new telling here makes some tweaks, including the whole idea of her being molded from clay.

So this is also the first story to show "Young Diana"/Wonder Tot, as well as Queen Hippolyte kicking some Herculean ass. Other stories in the book aren't so great, focusing a heck of a lot on Diana fighting circus animals and including several racist caricatures. But that origin stuff is Chef's Kiss(TM).
Comics Golden Age One Panel Wonder Woman