Category: ST Novels TNG
Last article published: 6 December 2009
This is the 10th post under this label 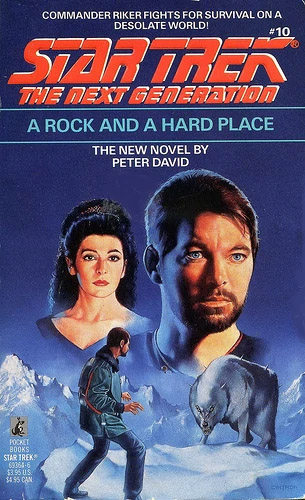 PLOT: When Riker is called away to inspect a terraforming mission led by an old friend on an ice world for a month, he is replaced by the mysterious Commander Quintin Stone, who seems disaffected and unstable. While Stone resolves a hostage crisis in a controversial way, his presence proving chaotic for the crew of the Enterprise-D, Riker gets lots on a rescue mission to find his friend and his family in the frozen wastes, a rescue complicated by the bio-engineered creatures dubbed the Wild Things. A worried mission scientist makes a call to the Enterprise, which races back to Paradise. Stone leads a mission to the surface to find Riker, who has been trying to survive and escape the ice mountains of the planet with his friend's teenage daughter. As the Away Team fights off the Wild Things, Stone pulls Riker to safety, but not before making him think that he's insane and might let him fall down a ravine. Stone, admitting he was never the same after having to stand by and watching a genocidal purge on a planet because of the Prime Directive, takes a leave of absence and remains on Paradise.

CONTINUITY: Riker's poker group has just lost Pulaski as Dr. Crusher is back and is invited to her first game. In time of stress, Riker and Troi are mentally linked even across vast distances (shades of Encounter at Farpoint). Riker is chosen for this mission because he's from Alaska.

DIVERGENCES: The uniforms have changed and we are in Season 3, so the cover is wrong to show Riker's open collar. Later revelations about what the Federation thinks of genetic engineer might contradict the creation of the Wild Things (unless it only covers sentients?). Worf says the Klingons joined the Federation. Peter David puts more sex, violence and profanity in the book that would be allowed in an episode. We should also note the strange similarities between Commander Stone and David's Captain Calhoun in the New Frontier series - the same unhealed facial scar and disrespect for authority.

SCREENSHOT OF THE WEEK - Commander Stone played by Colin Farrell 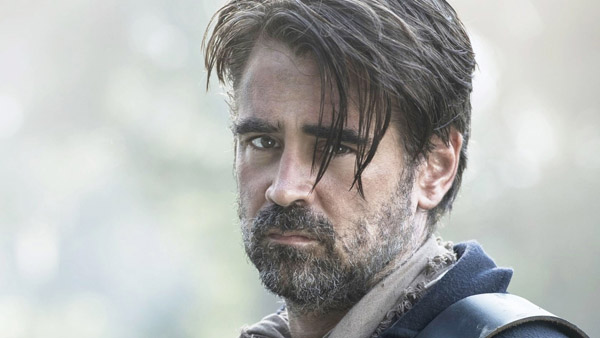 REVIEW: Peter David is well known for being allowed to play with Star Trek's shiniest toys, but this is a rare book of his that doesn't do that. In a way, it's still a precursor to his Imzadi (exploring Troi and Riker's telepathic relationship) and in Stone, we discover a prototype for MacKenzie Calhoun, star of David's New Frontier series. It's a pretty good read, but despite merging at the end, the fact that there are two stories is a problem. Riker's arctic adventure provides a cast with potential and a way to explore Riker's youth, but it's too slim a monster story for it to accomplish all that much. It feels like the Wild Things should be more of a mystery, and certainly, the terraformers are relatively cagey about some of what they're doing, but as soon as the (well-described) action kicks in, that's all but forgotten, and that potential lies uncracked. The mystery of Quintin Stone also suffers from its relegation to half of a plot. It seemed to me that he wasn't just "dead inside", but had some kind of empathic powers - the way he changed personality depending on who he talked to, and of course, his difficult relationship with both Guinan and Troi - but we're only given a psychological reasoning for his strange attitude, nothing more. Calhoun (who did not exist when the book was first published, obviously) had strange powers, so perhaps the similarities made me think there'd be something like that, but no, I think you get that impression whether you've read New Frontier or not. Regardless, David may have inspired TNG's Chain of Command, with Jellico taking Stone's role, and this makes an interesting companion piece to that exalted two-part episode. It's just that... I always felt like there was more to the story (both stories) the page count couldn't accommodate.
ST novels: TNG Star Trek

Tribble said…
I love that you brought back the book reviews, Ive been following along
September 6, 2022 at 2:40 AM

Then we'll see about sporadically doing more in between Trek seasons maybe.
September 6, 2022 at 8:08 AM