Category: ST Novels TOS
Last article published: 6 December 2009
This is the 14th post under this label 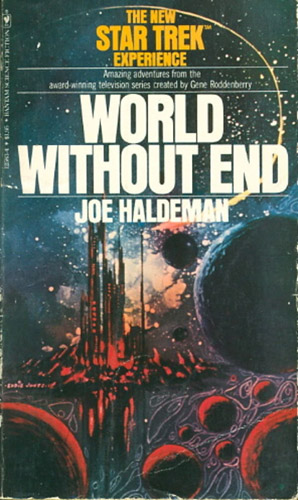 PLOT: The Enterprise comes across a planetoid-shaped starship - Chatalia - with a population of strange winged beams living on its interior surface. Wanting to warn them that their trajectory would bring them to empty space and cold death, an away team struggles to get themselves understood in this caste-system society. Meanwhile, the Enterprise is snared in a net as the alien craft starts to drain its power, something that happened to the Klingon ship on the planetoid's surface centuries before. As Kirk's team heads for the island of the ship's possible masters, the Enterprise's distress signal is received by a Klingon ship which immediately sends a bomb to destroy the planetoid and (as a bonus) the Enterprise. Scotty sends the crew to the planetoid's interior and tries to destroy the bomb, but the ship doesn't have enough power. Nor does the bomb as it turns out, drained before it hits. When the away team reaches the Chatalians' leader, the plant-like Father Machine, and Spock mindmelds with it, securing his crew's release in exchange for luring the Klingons - tastier morsels - there. Once back to the re-powered Enterprise, it's a simple matter of telling the Klingons they have been challenged, and though they know the truth and that they'll have to fight with knives, they accept.

CONTINUITY: The Klingons are looking for excuses to destroy a Starfleet ship within the bounds of the Organian treaty.

DIVERGENCES: Halderman isn't up on his Star Trek terminology and protocols, the most egregious of which is the term "confrontation team" for "landing party", and "mind touch" for "mindmeld". Spock punches someone, without trying a nerve pinch first (though since the Chatalians have no nervous systems, it wouldn't have worked). Some might raise an eyebrow at some of the biographical details given about Kirk, Uhura and the Klingons, but I can easily No-Prize them, so I'm not bothered.

SCREENSHOT OF THE WEEK - A Chatalian, from an alternate cover 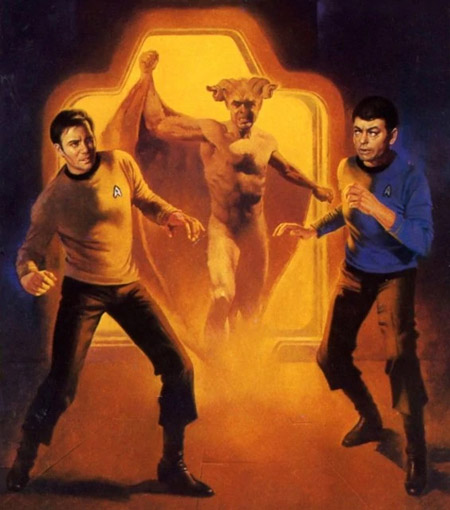 REVIEW: As with his other Star Trek novel, the superior Planet of Judgment, Haldeman brings a hard SF flavor to the franchise, creating a scientifically plausible ship of wonders and an internally-logical alien society for the crew to investigate and interact with. The reason World Without End isn't as good as PoJ is that it doesn't create nearly as many personal moments for the Enterprise crew, despite involving a great deal of them. Uhura and Scotty come the closest with their tearful goodbye and the engineer's subsequent last, drunken stand on the ship, but it's all very plotty otherwise. Haldeman is more interested in his original characters like Larousse the linguist (amusing to a French-speaking reader, since that's one of our more famous dictionaries), Tiney the Moon girl, and Moore the redshirt who knows his likely fate. Supplemented with what I call "documents" like computer print-outs, educational footnotes, and fairly redundant logs, I do include in that Spock's thought process, so there is an attempt at characterization through internal monologue for some characters. It's just not as interesting as what he was doing in PoJ. But it IS a fairly good science fiction adventure, one that would blow the budgets of even today's series, and I could have used more of his take on the Klingons. Even if they are slightly off in terms of format, I would have liked Haldeman to pen more Star Trek books; we'll just have to be satisfied with the two this Hugo and Nebula-award winner managed to churn out.